As digital currency trading and enterprise blockchain adoption rapidly advance in the global market, with the COVID-19 pandemic giving it an opportunity to come out of its cocoon and soar, interest into the sustainability of its technology has been running high.

And after Tesla CEO Elon Musk slammed BTC last May for its unsustainability due to its “rapidly increasing use of fossil fuels for Bitcoin mining and transactions, especially coal, which has the worst emissions of any fuel, the energy efficiency of Bitcoin, other digital currencies and blockchain technology has garnered so much more attention.

Before going into what energy efficiency is, it must first be understood why Bitcoin uses a massive amount of electricity. Each Bitcoin is minted through Bitcoin mining, the process of adding new data blocks composed of transactions onto the blockchain.

Proof-of-Work (PoW) is a consensus algorithm that governs Bitcoin mining. In PoW, miners, in competition against other miners, are tasked to solve a highly complex mathematical equation in order to win the right to add a new block on the blockchain.

A supercomputer that expends a huge amount of electricity is needed in order to solve this challenging puzzle. And this is why Bitcoin has been criticized for wasting energy. However, what people overlook is that PoW is indispensable to Bitcoin and central to it being decentralized, as well as to Bitcoin energy efficiency.

“Proof-of-Work is actually a kind of essential feature of a Bitcoin blockchain because it underlies the economic incentive model that actually makes Bitcoin work and makes Bitcoin scale… it keeps the industry competitive, and that’s essentially what drives Bitcoin to be able to eventually become a global infrastructure provider,” Steve Shadders, CTO of blockchain solutions firm nChain and Technical Director of the BSV Infrastructure Team, explained during the last CoinGeek Conference in New York.

Because there has been much debate about Bitcoin energy efficiency due to it being the pioneer digital currency and the first functional implementation of blockchain technology, there are many misunderstandings that have come about. What does it actually mean for something to be energy efficient and for a technology to be considered sustainable?

According to the Environmental and Energy Study Institute (EESI), “energy efficiency simply means using less energy to perform the same task—that is, eliminating energy waste.” Having a high energy consumption does not automatically mean that it is not energy efficient. One must look at what that energy is being consumed for.

And this is what a new study conducted by MNP, the fifth largest accounting, tax and business consulting firm in Canada, entitled “Blockchain technology and energy consumption: The quest for efficiency” has done, measuring, determining and comparing three Bitcoin implementations (BTC, BCH and BSV) when it comes to energy efficiency.

“Transactions are the ultimate measure of throughput. The number and size of the transactions in a block will affect the size of the block. BTC has a strictly limited block size approaching 4MB. BCH has a much more permissive limit of 32MB. BSV is unbound by block size. Since mining is what consumes energy, and blocks are the product of mining: the more transactions in a block, the lower the energy consumption per transaction. Similarly, the larger a block can be (measured in megabytes), the lower the energy consumption per megabyte,” the MNP report stated.

And because BSV has the ability to scale limitlessly, the amount of food it can store is constantly increased. Now, say all three refrigerators use up 1,000 kilowatts per hour (kWh). With refrigerator A, it takes 100 kWh to keep fresh one kilo of food, refrigerator B uses up 31.25 kWh for every kilo, while refrigerator C only consumes 0.4 kWh per kilo of perishable it stores.

Although this is a very simplistic view, the refrigerator analogy best illustrates the basic concept of Bitcoin energy efficiency. It is clear by the capacity of food it stores that refrigerator C (BSV) is the most energy efficient as it has the ability to provide more utility, which effectively lowers down its energy consumption. And this also corresponds to MNP’s findings. 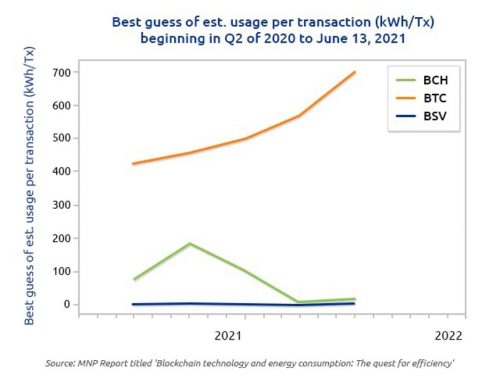 “Results indicate BTC consumes orders of magnitude more power than either of the other two protocols tested. The estimated consumption difference between the protocol with the most consumption (BTC) and the protocol with the least consumption (BSV) is at its most (16,041.24 GWh) in Q1 2021, and its least (11,343.25GWh) in Q2 2020 as per our model’s output. Our estimates indicate BTC consumes between 60 and 250 times the power of BSV per quarter,” the report explained.

Take into consideration the fact that BSV is being used by hundreds of companies worldwide from across many different types of industries—from government and healthcare to supply chain management and iGaming—and it makes the position of BSV being the green Bitcoin stronger.

Enterprise blockchain adoption is made possible by BSV because, unlike BTC and BCH that limits its block size and throughput to 4MB at seven transactions per second (tps) and 32MB at 116 tps, respectively, BSV can continuously scale and increase these numbers.

And increasing these numbers means a continual decline in transaction fees. Currently at 2GB blocks and over 5,000 tps—this will be increased to up to 100,000 tps when the Teranode update is released early next year—BSV fee per transaction is only at fractions of a penny. This is why enterprise blockchain adoption is possible.

The BSV blockchain is not only efficient, but it is also a lot cheaper, perfect for practical use by businesses. And as the blockchain scales, its potential for use is also reinforced, allowing for BSV to become technological plumbing that improves the world’s systems and processes.

“There are actually huge benefits to using Bitcoin, and that’s what justifies the energy cost. No one argues that we shouldn’t burn energy to run a hospital because it’s obvious what the benefit of that is and it’s obvious what would happen if you try to run a hospital without energy input. Bitcoin provides utility in ways that we haven’t even imagined just yet,” Shadders pointed out.

Interesting Related Article: “What Are the Benefits of Investing in Cryptocurrency?“