To gain a proper entry into the market, startups require funding mechanisms. They could be loans, venture capital, Kickstarter, support from investors, incubators, or saved funds. In the crypto world, startups use Initial Coin Offerings (ICOs), Initial Exchange Offerings (IEOs) and Security Token Offerings (STOs) to raise capital for new projects. Reportedly, these fundraising mechanisms have managed to raise billions of dollars for different projects. 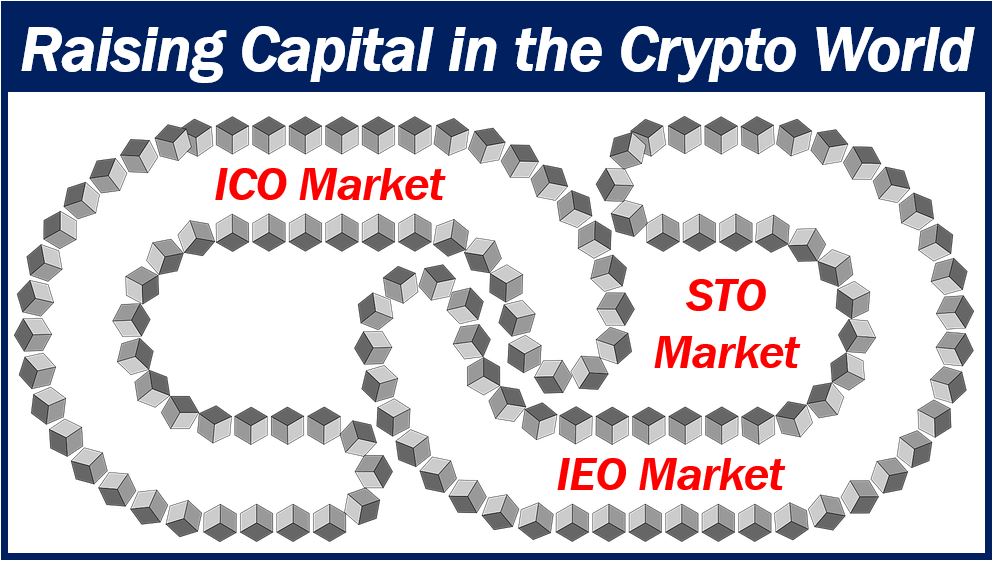 However, it has not always been rosy. While there have been good days, there have also been dull periods when there was a real go slow. This has left many wondering what the future of these fundraising mechanisms will look like: will they remain relevant? To be able to predict their future, let’s look at a broader perspective into the past and present of ICOs, IEOs, and STOs.

Of the three, Initial Coin Offerings (ICO’s) came first. When they were first introduced into the market in 2017, the crypto world was very much elated as they enabled individuals, companies, organizations, and businesses to come up with a digital representation of value and sell it to interested persons.

Startups would invite potential investors to have a look at their whitepaper which included every aspect of the planned projects. The investors would then be provided with a rough estimate of how much they would earn if the project turned out successful. Convinced persons would then buy the project  utility tokens at a given price. All this was done before the project was actually launched.

Once the project took off, investors were allowed to sell the tokens at a higher price thus making profits. The tokens could be used to access the native platform or decentralized Applications (DApps).

Many investors bought into ICOs as they brought a positive return on investment. For example, during that year, Quantum tokens (QTUM) were initially bought at $0,03 each. The price later skyrocketed to $103 per token. Any investor who bought the tokens during the initial sale managed to derive crazy profits.

ICOs created a win-win situation for both startups and investors. While investors grew their wealth, startups were able to effectively fund their projects. In 2017, ICOs grew so popular that over 900 ICO tokens were released and they cumulatively managed to raise around $4-6 billion.

In 2018, about 2,286 ICOs were launched and they managed to raise a total of $12 billion. However, despite the large numbers, things haven’t been so good this year. Graphs showed subsequent drops in the number of ICOs launched every month from January to December. By the end of the year, the numbers were quite low. This was attributed to the rising numbers of ICO scams. Startups would present projects and people would only invest in them to realize later that the projects had been fake from the very beginning. As many investors were duped in that way, the alarm was sounded in the crypto world. Also, genuine projects did not bring in much profit. Once unlocked, most began trading at a lower amount than what they were bought for.

The fact that ICOs were not regulated by government authorities did not help. Any company was eligible to create a crypto project and invite investors to it. Those interested would have to use their better judgment to decide whether to invest or not.

Since separating wheat from chaff was quite difficult, some investors simply chose to keep off ICO. which explains the huge drop in figures during 2018.

In 2019, nothing has changed much.  A study from CB insight shows that about $ 1.6 billion has been raised during this year which is quite a drop compared to the previous year.

Considering the continuous downward trend in ICOs  since inception to present, it doesn’t seem like the situation is going to change any time soon. Actually, later they may fall out as a way to raise money for startups. The level of trust in ICOs among investors is quite low.

STOs were born in 2017, soon after ICOs. Initially, through ICOs, startups would raise funds by selling utility tokens which could be used to access their services once their projects were up and running. However, with time, there was a need to create tokens more focused on the investment part rather than the utility part. This is because most investors grew less interested in the utility ability of the tokens and were keener on how the tokens would help them make more money. They heard that investing in bitcoin had brought others so much money and they also hoped to find the next ‘Bitcoin’ – thus the birth of STOs. The fundraising mechanism emphasized on generating attractive profit.

Contrary to ICOs, STOs are regulated by international securities regulators that give no room for scammers. Those regulators set the terms and conditions required for a project to qualify as an STO. They also create the rules that govern the operations of STOs. This way investors trust was established. The advantages of STOs include:

Despite those many advantages that STOs offer, they did not maintain their popularity. This is because any startup with the intention of using STOs underwent a thorough screening process by international security regulators. This was done to ensure they were genuine and their digital tokens were backed by real assets – be it equity, debts/loans, or investment funds. Only a few startups manage to satisfy those regulators. Due to the conditions put in place, many startups were reluctant to make use of STOs. They only had two remaining options: to make use of secondary markets decentralized and peer-to-peer exchanges (which have poor user experience) or go back to ICOs which were lesser regulated.

The adoption of STOs continues to grow day by day. However, it doesn’t really favor startups as relying on a third party to make crucial business decisions isn’t everyone’s cup of tea. The regulators could one day wake up with a new set of rules that just changes everything. However, people prefer them as they are more secure and well- regulated compared to other fundraising mechanisms. Considering that people are the ones with the money, start-ups have no choice but to play ball, at least to get what they want. Therefore, the future looks bright for STOs.

An initial exchange offering works in an almost similar concept as an ICO but the main difference is that the raise is conducted on the platform of a cryptocurrency exchange. Startups present their projects to a preferred platform which lists the project’s token on its exchange and avails it for trading. The exchange also helps in marketing and popularizing the new token. To show their appreciation, start-ups pay a listing fee plus a certain percentage of the amount raised during the token sale. Investors who wish to take part in the new projects are required to first create an account with the exchange. They should then fund their digital wallets with appropriate coins and use them to purchase the new tokens.

Usually, exchanges thoroughly vet new projects before launching them on their websites. They look out for good-quality projects which have the potential to grow their own business after the initial raise. This is done to protect their own reputation and users from dubious projects. For this reason, IEOs provide an increased level of trust among cryptocurrency projects.

This fundraising mechanism was introduced in  2019 by Binance. The first project to be listed on the platform was Bittorrent. It was so successful that it managed to raise $7.2 million in record-beating 18 minutes. With time, other platforms also adopted the model leading to the listing of hundreds of projects. Such platformsinclude: Bittrex, Huobi, Kucoin, and OKEX among others.

Conducting token sales via an exchange platform enables start-ups to access large user bases. All this spurs the much-needed hype. They are also able to quickly raise funds vital for them to finance their projects. On the other hand, investors are confident that listed projects are genuine since they have already been vetted.

Despite their advantages, IEOs have not been so well received. This is because not all exchange platforms can be trusted. Some are too small to care about their image; considering they may not be in a position to make enough money, they take the opportunity to earn from startups. In the process they do not properly vet startups thus allow bogus projects into the market.

Also, a project’s incentive is to raise as much capital as possible, and IEO projects do not achieve this as they only get a share of capital raised. Therefore, “top projects” prefer raising capital on their own instead of paying a substantial fee to a platform for performing the same functions. Only few IEO tokens are lucrative enough to attract investors.

So far, IEOs have only achieved success at a small scale. It’s not clear whether they will generate the hype to turn things around. Unless the above issues are addressed IEOs’ future remains unclear.

IEOs, STOs, and ICOs are not the only fundraising tokens available in the market today. There also exists:

Those offer competition to ICOs, IEOs, and STOs. Following the crypto world’s trend, it seems like every year a new fundraising mechanism emerges and it generates much hype until another mechanism is introduced. If the new offers better benefits and conditions, investors disregard the old. Though one may be more preferable than the other, each token-based fundraising mechanism has its own audience of fans.

Let’s strike the bottom line.  In the crypto world, nothing about the future is set in stone. People will always go for what serves them better at the particular time.