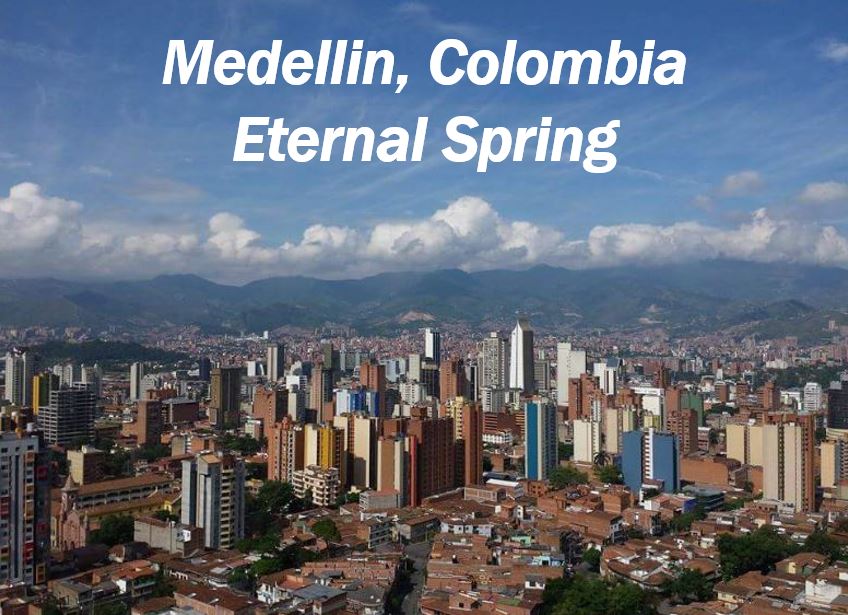 Located on the western range of the Northern Andes Mountains in Colombia, Medellin is known as the City of Eternal Spring. Thanks to an average annual temperature of 72°F, the tropical city enjoys consistent, steady sunlight over 12-hour periods and stable rainfall.

Such conditions nurture an abundance of plant life: coffee, flowers, bananas and the most newsworthy of late — cannabis.

The South American nation of Colombia is beefing up its economy and reducing its dependence on oil by becoming a leading global producer of medical marijuana products. It provides a viable and attractive cash crop for subsistence farmers that can be used to replace illegal coca plantations.

As two recent visitors to Colombia wrote: “As we walked up the hill, we didn’t expect the scene to look so much like our fantasy: a vast field of open-air crops, rooted in the soil, and protected only by a thin canvas ceiling. What we saw in there was much more than a beautiful harvest of cannabis. It was the confirming omen of Colombia’s future. The Land of Cannabis. Legal, and for the world.”

Because of its favorable climate, Colombia has an edge over Canada and other nations that have legalized cultivation. High-cost climate-controlled greenhouses are not necessary in equatorial Colombia, plus start-up and labor costs are lower than they would be in other regions.

Leading the way is PharmaCielo Ltd. (TSXV: PCLO)—one of Colombia’s first licensed producers. Its headquarters and principal cultivating facility are located just north of the city of Medellin.

PharmaCielo’s facility will produce high-quality, stable plants to be used by its contracted growers. It is also building a research and processing facility, which is expected to cost around $5 million.

Dr. Delon Human, PharmaCielo’s global head of Health and Innovation, says the company is structured with a single strategic objective in mind: “To be a dominant global supplier of both branded and white-labeled refined cannabis oil for large global distribution channels.”

It recently expanded its Medical and Scientific Advisory Board, adding a group of top global medical researchers and scientists who will help to further enhance the company’s product development strategy and bring high-quality, customized products to market.

One development of note is the acquisition of UBIQUO, Colombia’s most important medical patient and e-clinic platform. UBIQUO currently has 85,000 patients on its platform in its home base of Medellín, allowing practitioner and patient access to cannabinoid treatment options. It plans to add UBIQUO clinics in seven additional Colombian jurisdictions.

Additionally, in June 2019, PharmaCielo announced it had entered into an agreement to acquire Creso Pharma, a global medicinal cannabis company, an acquisition which will quadruple PharmaCielo’s global footprint and allow them to have a presence in more than a dozen countries.

David Attard, CEO of PharmaCielo, summed up the company’s growth spurt:  “We are on strong footing as we launch scale production and sales in 2019. The Company is already producing the highest quality of medicinal-grade cannabis oil, is well capitalized, has near-term revenue opportunities and is engaged in advanced discussions to enter target international jurisdictions.”