The meat substitute industry reportedly is already worth over US$8 billion, and that number is set to substantially grow by the end of the decade. Many people have tried one of those meat-free sausages, or a soy hot dog, or a veggie burger… and the verdict is usually: It was acceptable. Considering the mystery meat mixes that sometimes make up what’s labeled “ground beef” or the formulas used by fast-food chains to create ‘chicken’ nuggets, plant-based alternatives that taste pretty close to the real deal can be quite appealing. It’s also reasonably easy to make a convincing case that plant-based choices are healthier.

Consumers, however, are getting more demanding. Acceptable replacements aren’t going to cut it. The eight billion dollar valuation of the meat substitute market might sound like a lot, it’s a drop in the pan compared to profits from the animal meat industry. Sure, plenty of non-vegetarians will have a veggie burger now and again, but most people on earth — approximately 86% according to one survey — still want meat in their diet. Why? Meat is special. Its flavors and textures are unlike anything else. The image of a juicy steak remains – in many people’s minds – associated with pleasure, satisfaction, celebration, and wealth. — Alternative meat producers have their work cut out for them. 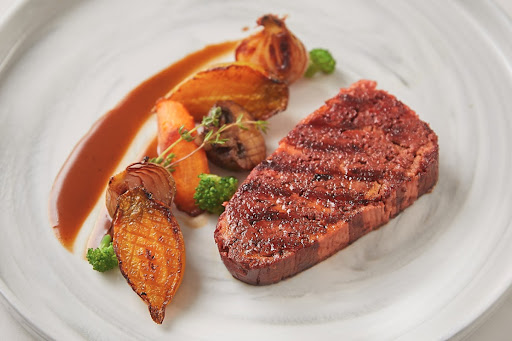 Not often thought of as a technology for the food industry, 3D printing has actually been used by restaurants and commercial kitchens for quite a while. You can print pretty much anything you want with any combo of ingredients… and that’s what’s being done with the latest types of alt-meat. It’s hard to imagine a substitute getting close to the Holy Grail of steak – which, incidentally, produces the highest profits for the meat industry – but they’re getting there. –Seriously. Venture capital firms have demonstrated their faith in new meat ideas by pumping tens of millions of dollars into start-ups, according to Reuters. What these VCs are funding could be no less than a possible bridge to a sustainable future.

As noted above, it’s true that the US$8 billion plus meat substitute market is dwarfed by comparison with the US$1 trillion that the ‘real’ meat industry is expected to generate by 2025, but those born in the 1950s – 1990s are a very different group of people than those born after the turn of the millennium. A ubiquitous internet has increased knowledge across the board: of health dangers, environmental concerns, sustainability issues, and has given celebrities and activists a platform from which to make their case that eating meat is unhealthy, environmentally disastrous, and unethical. And young people are listening.

Millennials and Generation Z are moving toward plant-based diets fast – especially in Western Europe, with the United States and Canada trailing – and they’re not all doing so because they think killing an animal is “murder.” Huge numbers of young adults and teenagers are embracing flexitarianism, the idea of significantly reducing meat consumption and their choices for doing so are often motivated by health concerns as well as due to altruistic and ethical reasons, but for many the primary motivation is the environment, which younger generations have little doubt is being affected by climate change.

Those who will sustain the businesses of the future have great concerns about future sustainability. How can we feed a projected nine or even ten billion humans set to populate the earth in a decade or so? Every answer given by scientists points to drastically reducing if not eliminating meat production.

A recent report by the Maryland-based National Center for Biology Information (NCBI) makes the case that the Covid-19 pandemic will affect the future of meat consumption. Their argument is that as people become more aware of the link between raising animals for food and the infectious diseases that can be passed from those animals to humans, this awareness will spark reflection. They then predict that a greater number of people will begin considering major changes to their diets. It’s an interesting argument that has a lot of logic. But more fundamentally, social norms are changing.

Younger folks – raised on an internet diet of health info and celebrity endorsements of veganism – will be the majority in the not-too-distant future, and if a quality alternative product is available, even at a premium price, they’ll likely embrace it. The keywords there, however, are “quality product.” Meat alternatives can’t be too much of a ‘sacrifice’ if they’re to be embraced by most non-vegetarians.

In conclusion: An “alternative” that gets awfully close to the real thing is the best of both worlds. –Satisfaction for one’s taste buds and one’s conscience. It’s an attractive business opportunity that could be worth spectacularly more than predicted if consumers decide it’s nutritious and delicious.