Renewable Energy With The Help Of Slip Rings

Renewable energy is one of the world’s missions to help reduce the production of energy from non-renewable sources that come with a negative effect on the planet.

The main reason is not only that renewable sources can be generated all over again without any disadvantage to the Earth, but they are also much easier to replenish at a higher rate than they’re used to produce electric energy.

In this post, you’ll learn how one small device called slip ring has an important role in the production of renewable energy with the help of wind turbines, so keep on reading!

The Best Renewable Energy Source and How Wind Turbines Work 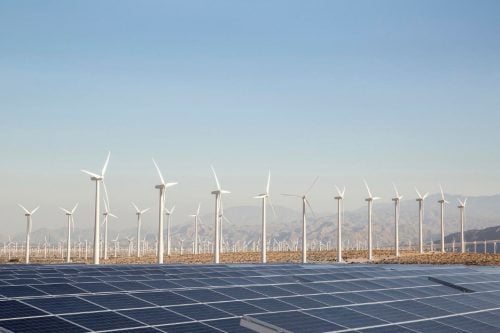 One of the best renewable energy sources is the wind because it is the easiest to replenish, and using it to rotate wind turbine blades really doesn’t have any downsides to the Earth or the wind itself.

According to energy.gov, the wind is the largest source of renewable power in the United States, it is growing 15% per year, and it continues to grow at a rapid pace.

And if you haven’t heard of wind turbines, they’re machines specifically designed to “harvest” the wind with the help of its big turbine blades.

These blades then transfer the kinetic energy with the help of the rotor on the inside of the wind turbine, all the way to the generator which is the main component that turns this kinetic energy into electricity.

What are Slip Rings and How are they Built? 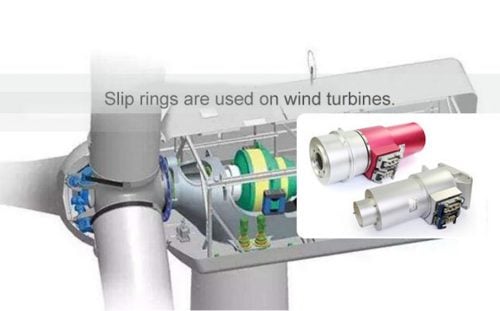 Slip ring is a small device that is often used in devices, machines, and equipment that have both a stationary and a rotary part.

They are made to eliminate writing in the joints and eliminate wire winding problems in the machines which can lead to hazards during operation and even lead to a downtime of the machine in case of an error.

Slip rings are built with only a couple of components, and two main components are the ring, the outer part, and the inner part, the brushes (or wipers). As the rotation happens, brushes slide on the ring and establish a very strong connection.Such a connection helps reduce the number of wires around the joints and it is crucial in bridging the gap between the stationary and rotary parts of a device. On top of that, slip rings help transmit electrical signals, power, data, and other medium types, depending on the type of a slip ring.

How Slip Rings Function and What is Their Purpose?

Slip rings are built in a very simple way, with very few components and yet they’re very versatile and have incredible functionality.

They function upon the rotation and as long as there’s rotation from the machine, there’ll be a way for brushes inside the slip ring to brush against the ring and establish a contact.

Since the slip ring acts as a bridge between the stationary and a rotary part of the device, it can help transmit electrical signal, power, and data upon the connection and rotation.

While the slip ring’s main purpose is to eliminate the wire winding problems, its secondary purpose is to transmit an electrical signal, power, data, and other medium types.

However, with so many advantages and incredible functionality, slip rings can be used to add resistance to the generator, limit the speed of the motor, or ensure that the blades on machines such as wind turbines aren’t rotating faster than they safely can.

Since slip rings can handle high load capacity and provide a safe slow start, it is ideal for use in heavy machinery that requires a slow start for precision, such as excavators. Of course, slip rings are built to withstand any type of working conditions so they’re a great match across a wide range of industries.

Benefits of Slip Rings for Wind Turbine Use 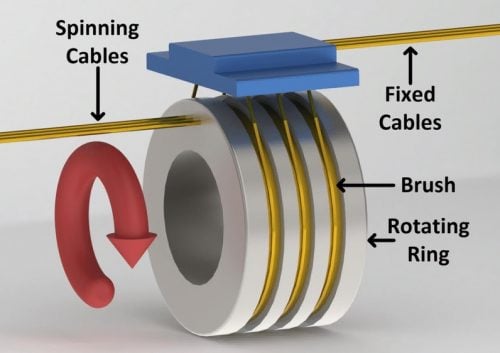 So now that you know what slip rings are, how do they help machines such as wind turbines?

One of the ways slip rings help is to add resistance to the blades and limit the blades from spinning above the safe speed which could be harmful to the wind turbine.

Then, we have slip rings at the point where kinetic energy is being transferred from rotating blades to the rotating rotor.

After that, slip rings are also placed at the connection between the rotating rotor and the generator which is used to finally produce electric energy.

Therefore, one device is being used in a couple of different ways to help with simple but important tasks to smoothen the operation and ensure the safety of wind turbines.

Companies such as Moflon produce 6 different types of slip rings that are able to fit almost any industry, from beverage & drink, aerospace, robotics, and wind turbines to medical imaging equipment, radar equipment, heavy machinery, and more. On top of that, Moflon provides custom slip ring solutions to companies that require specific slip ring types to fit their projects and innovations.

Renewable energy is on the rise and with modern technology, the production of machines such as wind turbines is becoming much more affordable and easier to install than ever before.

With the use of slip rings which are often an overlooked little device that is very versatile and has an important role in the equipment, it is placed in.

The great thing about slip rings is that it’s keeping up with the needs of modern engineering so we’ll be able to see many more uses of slip rings in equipment that helps generate renewable energy.