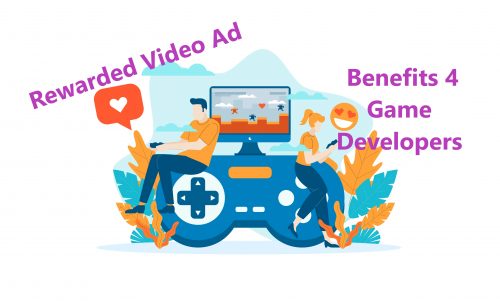 Clearly “Rewarded Video Ad Monetization” has become the first choice of monetizing free-to-play games on Web and Mobile Game applications. To think of Reward Video Ad as a mere form of monetization is to miss a whole bunch of complementary benefits it provides. What do I mean by “Complementary benefits of Rewarded Video Ad”? … Let me dive a bit to discuss the benefits of rewarded video ad for game developers:

By providing unique and fun ways to reach or pass game milestones, game players are encouraged and continue to play, hence stay engaged. The alternative is a frustrated player who can not pass a game level/milestone. So, by introducing reward video ads for a small favor inside a game (watching a video ad), players keep playing, stay happy and stay engaged. Many game developers have doubled their LTV’s by doing so. Surveys also suggest that users are most likely to spend more time on the app (twice to be exact)

Rewarded Video Ads provide a “sneak pick” to premium game features that are only available for paying users. By letting nonpaying users experience “paid features” for a small fee (30 seconds video Ad watching), game developers can show, even lure, nonpaying users to pay for such a premium game experience. In other words, once a user gains premium content from rewarded video ads, they are more willing to purchase in-game money and bonuses since they’ve been able to catch a slice of that premium content and effectively understand the value it offers.

AppLixir Statistics also confirms that – users that have watched a Video Ad are 3 times more likely to pay for in-game items.

Last but not least, Money! Reward video Ad provides a good stream of revenue for any developer that has implemented Reward video Ads the right way. Looking at our client revenue numbers, an average game developer can bring 3 times more in revenue than Banner ads. On average, most of our clients increase their revenue by 55-60% by introducing Reward Video Ad Monetization. AppLixir rewarded video ads increase overall ad revenue and provide one of the highest eCPMs for game developers and publishers. The rates are dependent primarily on audience location, but in the North American region, AppLixir rewarded videos generate an average eCPM of $6 – $10.

Before summarizing, I want to list few ways game developers can implement Reward Video Ad inside their games.

If the user loses a level in the game, a reward video ad is also used for the revival. The user can revive by watching the complete video ad. Otherwise, he/she has to use the game money or restart the level.

If a user chooses to spend money/coins in the game for the revival again and again, at one time, he/she may get short of money. Then the video ads can come along, whose reward will be some amount of money or coins. The user will have to watch the video ad complete to get the reward.

Video advertisements can also offer daily rewards. These rewards may include any booster, coins, or lives for the user. For these rewards, the user must have to watch the video ads.

If the user has finished the level without any loss and he wins the game. Then, a video ad can pop up, recommending to multiply the reward, he has won. Sometimes, users prefer watching these ads to get multiplied rewards.

When a game doesn’t have lives option for revival, you must include a video ad for the user to revive. In this way, the user can only revive the game by watching the ad and there’s no other option.

If a user is playing some puzzle or riddle game, he/she must need some hints to cross some levels. A video ad can tender the users with hints to complete their levels.