When, in 2008, Satoshi Nakamoto introduced the world to bitcoin, the world’s first cryptocurrency, a growing number of computer science and finance experts responded with interest and excitement. Over time, the crypto community had its own forums, advocates, and outlets that covered news and updates.

One of the first and most influential media covering Bitcoin and crypto news was Bitcoin Magazine. One of the publication’s co-founders was a Canadian teenager and a crypto enthusiast — you guessed it, Vitalik Buterin.

Before he designed the world’s largest blockchain network, Buterin already had a strong presence in the community. He worked as a writer both for Bitcoin Magazine and Ledger: a blockchain-themed science journal.

Before starting Ethereum, Buterin was supposed to work on Ripple with Jed McCaleb, but the partnership fell through due to relocation difficulties.

Birth of Ethereum: The 2013 White Paper

In 2013, Buterin published a white paper that outlined the concept of Ethereum — a blockchain network that would allow its users to build smart contracts and decentralized apps.

Buterin realized the challenges that came together with blockchain development — specifically, that programmers had to build custom blockchain networks to deploy platforms. Ethereum was set to change it by building a protocol that would facilitate the creation of dApps — decentralized applications.

A screenshot of the old Ethereum website: courtesy of the Internet Archive

For a stroll down a memory lane, you can read the original white paper on the network’s website.

The original white paper gave a high-level description of the network, its applications, and the development team’s plans on scalability.

As the white paper came out, people wanted to know more about the algorithm and its inner workings. A technical review of Ethereum was needed both for the development team who would cement their vision and differentiate from other crypto projects and the community, eager to discover the intricacies of the network.

In 2014, Garry Wood released the Ethereum Yellow Paper that dives deeper into the technology supporting the network. You can take a look at it here and read a full rundown of it in this seven-parter.

In 2014, the Ethereum Foundation made the first token sale announcement. In an Ethereum blog post, Buterin describes the mechanics of purchasing Ether and updates the community on other network milestones. 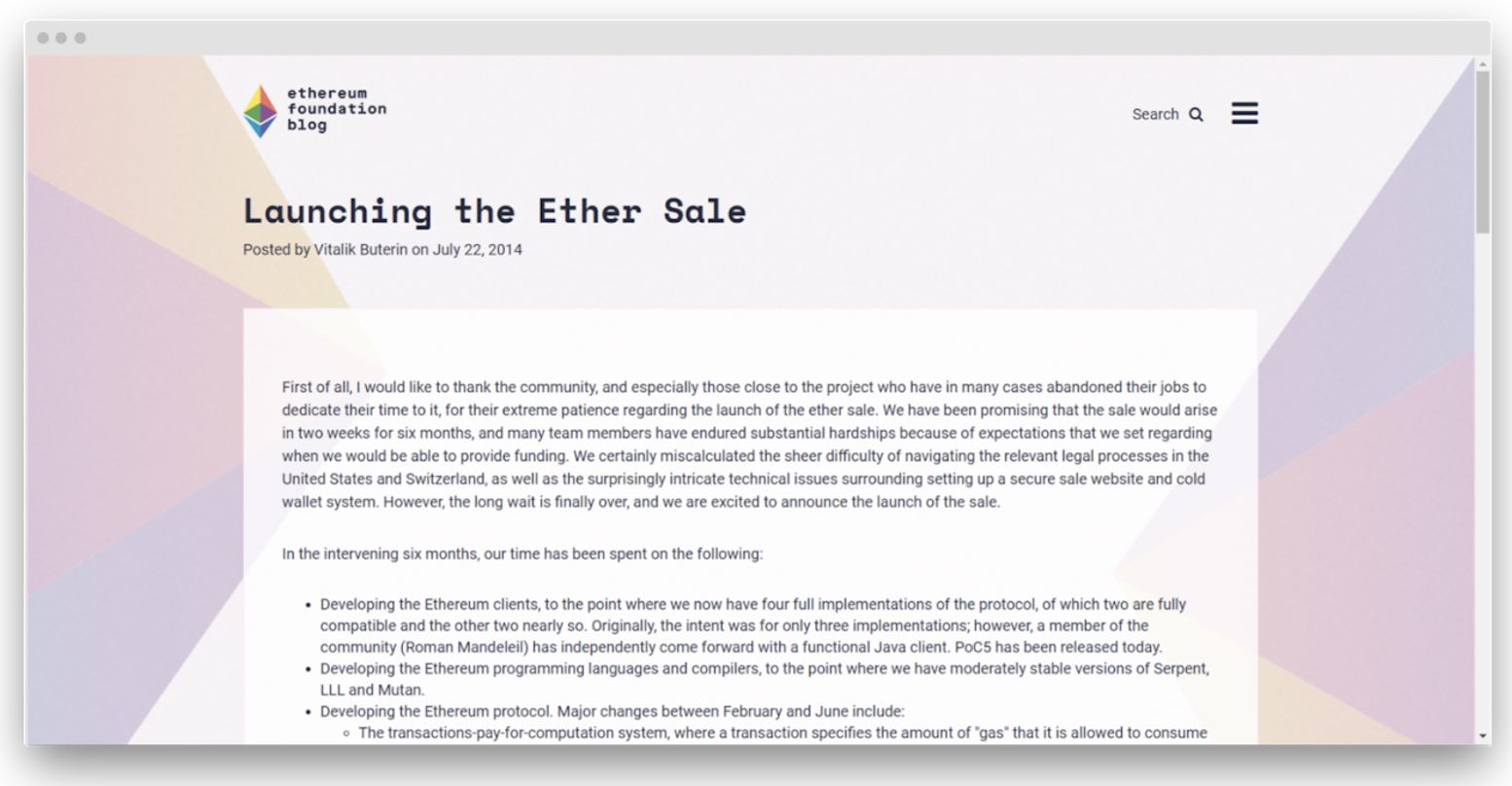 The first ether sale lasted for 42 days and allowed buying tokens for BTC.

This page of Ethereum’s history is a cautionary tale for the rest of the community. In 2016, due to an insecure DAO smart contract, hackers were able to drain over $3.6 million in ETH. As a result, token prices fell. Also, at the time, The DAO held over 15% of the total ether supply.

This reverse-calling vulnerability attack was an unprecedented event so the Ethereum community starting looking for a viable way to control (or reverse the damage). As a result, a decision was made to rewrite history, with a soft fork that moved funds from the old to the new contract.

85% of the community backed the soft fork. 15% of those branched off as Ethereum Classic (ETC).

The series of forks implemented between 2017 and 2019 helped secure and optimize the network. Here’s a brief summary of what each of these decisions accomplished:

Last year was huge for the Ethereum community. The community hit several important milestones, the most important of which was the deployment of the Beacon Chain on December 1st. 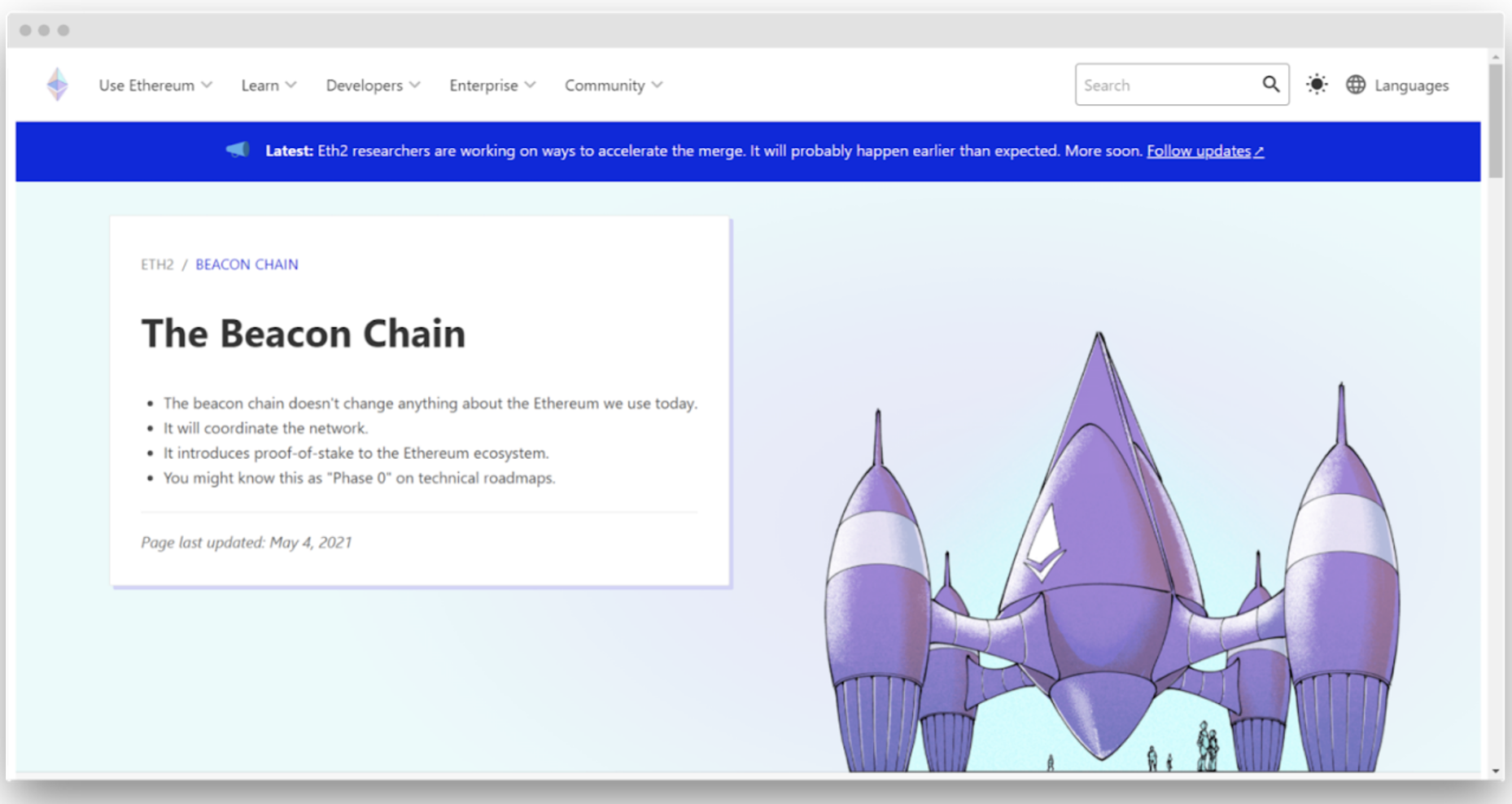 This event marked the introduction of PoS to Ethereum and is the first in the series of network updates known as Ethereum 2.0

At the moment, the Ethereum team is working on two important network updates:

The Ethereum history is complex and fascinating though it looks like the ambition of the future is even more exciting than the legacy of the past.

On the smaller, yet just as significant scale, the history of the network is written epoch by epoch, with each transaction and validator joining the network.

To track the activity of the network, the number of available validators, as well as the summary of epochs and blocks, take a look at the new ETH Explorer that supports ETH2 network. It’s an intuitive tracker that helps users monitor the performance of specific validators, track blocks, and epochs. Also, there’s a library of educational posts that’ll keep you in the loop about the latest Ethereum updates and best staking practices.