Bulls or bears, up or down – one of the key factors for entering a position is to determine the long-term trend. A universal tool in this sense is the 200-day simple moving average (SMA). The theory states that as long as an asset remains above the indicator in the daily range, there is an uptrend.

Support and resistance levels could also be a great tool for identifying trends. In addition, it gives investors a reference point for entering or exiting a trade. The process begins by connecting two or more of the highest and lowest points of an asset. The second low must be higher than the first for the line to have a positive slope.

Note that at least three points must be connected before the line is considered to be a valid trendline. A downtrend is an exact opposite. A sideways trend, in turn, is the horizontal price movement that occurs when the forces of supply and demand are nearly equal, according to Investopedia. 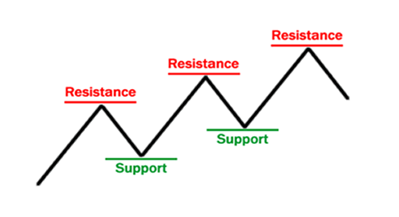 In the graph above we see a bullish trend with a couple of resistance and support levels. Instead of candles, it might be preferable to use line charts, because they don’t include the ‘wicks’, or ‘shadows’, that show the range of price traded in the day, but only the closing price of each day.

The wicks are often market reactions, rather than an intentional movement. So if you don’t want to misread the information, use simpler line graphs and plot lines that could mark out the areas where peaks or valleys are forming, just like in the following image. 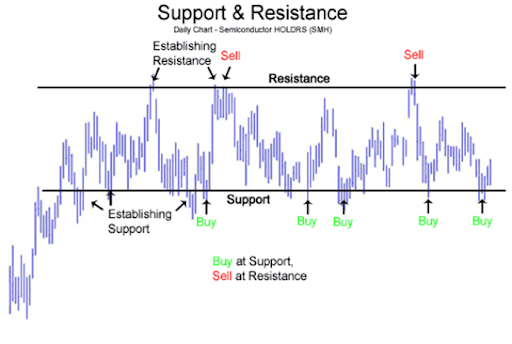 You should always take into account the strength of a level. Normally it is measured by the number of times that each level is tested. In the chart, we can see that the resistance has been tested 4 times and each time the price reached this point, it immediately fell down.

Meanwhile, the support zone has been tested 6 times and once the market reached it, the upward trend started. A cautious and experienced trader understands that in this case, it would be more appropriate to trade within the zone because it is very unlikely that the trend will break soon.

Thus, once the asset reaches the support level, it could be a perfect opportunity to enter, unless there is a crucial event ahead (financial calendar can tell if there is one coming soon) that could drag investors’ optimism down. The resistance level, in the meantime, is a zone where many holders wait patiently with their sell orders, forming a large supply zone.

Doesn’t sound so difficult after all, does it? The problem is that it takes time to acquire this skill, but once you’ve got it, you will be able to improve your analysis and forecasting abilities. It will help you not only to identify the trend but also to choose the best entry point.

Trading volume can serve as a secondary indicator. Strong trend movements go side by side with increased trading volume. One can expect high buying volume at support and high selling volume at resistance. Overall, however, trades should be based on a complex analysis – fundamental factors and technical picture. As the saying goes, trust, but double-check.