The Legendary Relationship of Converse and Skating

The Legendary Relationship of Converse and Skating

How the basketball trainers became a skating icon 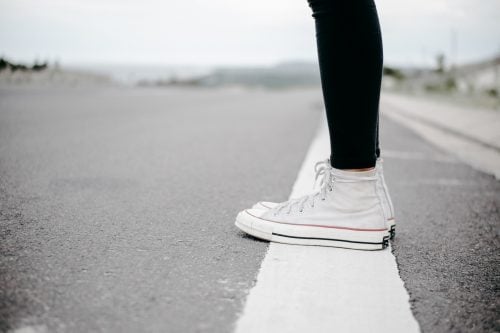 Chuck Taylor’s All-Stars (also known as Converse All-Stars) shoes have been a key part of American fashion history since their launch. And they have been a style icon nearly as long.

The shoes were first launched in the 1920s and since then the brand has gained global recognition and popularity. The shoes have been worn by a wide variety of stars including Elvis Presley and Sylvester Stallone.

In this article, we are going to explore the history of All-Stars, how they became so popular, and the basketball shoe vs skateboarding shoe argument.

The History of Converse

Converse is an American shoe company that was founded in 1908. But it wasn’t until the middle of the 1910s that they released the product that we all know them for – what we now know as their All-Star shoes.

These shoes were originally launched as basketball shoes. They were made out of dark brown and black canvas. They were designed that way to replicate the leather look (at a lot lower price). The idea behind these shoes was that they would be comfortable enough for basketball players to play in and not too expensive.

However, the basketball player Charles H. “Chuck” Taylor was not happy with how the shoes were performing. So, he walked into the head office of Converse and complained to them that their shoes were making his feet hurt.

Instead of taking this as an insult and kicking Taylor out, they hired him as a Brand Ambassador and he worked with them as a product consultant. Together Taylor and Converse created the shoes Chuck Taylor’s All-Stars.

Converses became incredibly popular with professional athletes and amateur players alike after Taylor’s involvement. They became the official shoes of the NBA and became fashion statements on and off the court. Converse started producing the shoes in brighter colors.

However, after Chuck Taylor’s death in 1969 things began to change for Converse. They were bought by their biggest rival PF Flyers. But due to a shoe market monopoly, the companies were split. At this time many new shoe brands launched to make the most of this market change.

Due to the rise in competition, the NBA dropped Converse as their official shoe provider and in 2010 the last Converse wearing players left the NBA. The shoes haven’t been worn in the league since.

All-Stars have been worn in many films and David Tennant wore a range of All-Stars during his time as the BBC’s Dr. Who. The shoes have become more popular in South Korea after members of the band BTS were seen wearing the shoes in 2020.

While Converse’s All-Stars were becoming less popular in the world of Basketball, they were starting to be adopted in the underground skateboarding scene.

Converses first became popular with skateboarders in the 1970s. However, before that, they have become incredibly popular in the world of surfing because they were fast drying and easy to wear on the beach. As the skating scene grew in the 80s and 90s, so did the popularity of Converses with skateboarders.

Skateboarders needed shoes that offered them the flexibility to move their feet and ankles without having to compromise on ankle support. They also needed shoes that had a good amount of grip on the bottom. These were the same things Basketball players needed and skaters found All-Stars were the perfect fit for them. Read about why Converses are good for skating here – https://sootheyourfeet.com/are-converse-shoes-good-for-skating/.

As Converse completely left the NBA, they turned to the world of skateboarding. In 2009, they brought 7 professional skateboarders on as Brand Ambassadors. 3 years later, they added 2 more skating ambassadors to their team. In the same year, they started sponsoring skateboarding events.

Are Converse All-Stars a Basketball or a Skating shoe?

There is a big argument in the world of fashion about whether we should be classing All-Stars as Basketball shoes or Skating shoes? Well, we say – why can’t they be both.

If it wasn’t for the sport of basketball, All-Stars wouldn’t have been invented or have gotten so popular. However, if the shoes hadn’t gained popularity in the Skateboarding circles, then the shoes wouldn’t be around anymore (after they were dropped by the NBA and nearly went bankrupt).

The shoes can be used for both sports, or you can wear them because they look good. Whatever reason you wear your Converses for, know that your shoes will never go out of style.