Tips to Help You Become a Sudoku Pro

Playing Sudoku can be highly rewarding and leaves one with a sense of achievement. Unfortunately, most people shy away from the game, thanks to the rumors and myths that it is a complex pastime activity. What appears to be a complicated mathematics game is, in an actual sense, it is so easy – when you know what you are doing.

Here are some tips you should familiarize yourself with for an easy ride as a Sudoku beginner;-

As with any other game, begin by learning as much as you can about Sudoku. That’s the best way to become an expert.  Learn the dos and don’ts and the intended end goal of the game. Though they may seem straightforward, rules can help enhance your understanding of the game. This way, you can quickly get the hang of Sudoku while maybe learning a few techniques to help you complete the puzzle.

Some of the Sudoku rules you should be familiar with include; 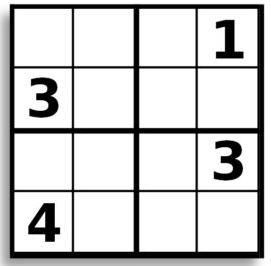 Even the Sudoku world champions had to start somewhere, and so do you. Begin with the most straightforward Sudoku puzzles as you gradually work your way up to more complicated versions.

Luckily, dozens of free beginner’s Sudoku are available online, which you can download at your convenience. Also, you can choose to purchase a Sudoku exercise book – the beginner’s version.

Sudoku requires that you keep your eyes moving. Avoid concentrating too hard on one part of the puzzle in case you feel stuck. Instead, let your eyes and mind wander to other parts of the grid without numbers. This way, a new possibility is likely to become apparent as you draw closer to completing the puzzle.

The primary trick with filling a Sudoku is giving it your 100% concentration. Each time you place a new number, re-evaluate your grid to identify the changes that have been brought about by that single digit. Remember, every number you fill in opens opportunities to place numbers in the adjacent rows and columns.

Sudoku requires logical thinking with little to no guesswork required. Ensure your thoughts are organized and, if possible, avoid distractions. Remember, if you guess where you should place the numbers, the rest of your puzzle will be affected, making it impossible to complete. Therefore, ensure every number you fill in is a result of an educated and well-thought decision.

Most Sudoku beginners expect to become pros overnight, which is unheard of. Learning the skills and techniques required to climb up the experience ranks takes time. Patience is a common virtue amongst all Sudoku gurus.

If you are not a patient person, you might want to reconsider your pass-time activity or participate in patience-enhancing exercises such as meditation.

While some people get hooked with the first attempt, for others, it may take time. Plus, it may not be as easy as you had hoped. Spare a few minutes every day or once a week to polish your skill and technique.

With time it gets more manageable, and you might end up enjoying the game more. Most importantly, please do not give up, no matter how hard it gets. Instead, give your brain more time to learn the new concept.

Luckily some online Sudoku games and applications come with hints to help beginners find their groove. Please take advantage of these clues, but do not overly depend on them. Though it is not the same case with printed Sudoku puzzles, do not be afraid to ask for hints from those around you.

Filling a Sudoku requires you to scrutinize the entire puzzle and its sub-grid to identify the missing numbers and correctly place them. While there are different techniques you can adopt to help scan puzzles, the cross-hatching technique has been the most effective among beginners.

Cross-hatching involves examining each row and column to identify a unique number in that specific sub-grid. This way, you are aware of the numbers you require to place in the empty spaces.

Counting is another strategy that will help you become a Sudoku guru. With this technique, you count the numbers in a row, column, or sub-grid to help you recognize the missing digits. Count out loud if you have to; ensure you are not guessing any figures.

As a beginner, you may have learned different tactics that are thought to help one swiftly complete a Sudoku puzzle. While there is no denying that these tactics could be useful, let the elimination method be your priority. Here’s why it should top your list of tactics.

Start by counting the present numbers and then use the elimination method to reason the missing numbers before figuring out where each digit goes. For a particular row, column or sub-grid, you could try writing down the numbers one to nine, then cross out the filled numbers. From there, it should be easy to place the numbers correctly.

Do Not Give Up

As with any other task, job, or skill, the secret to success is never giving up. Decide that you want to become a Sudoku guru and put mind and effort into it. Even if it takes ten or more trials to complete your first Sudoku puzzle, do not give up just yet. Instead, re-strategize and seek reinforcement is need be.

Sudoku triggers the part of the brain that longs for order, logic, and a gradual progression towards a fulfilling achievement. That alone makes Sudoku a fun and mind-boggling game with so much to enjoy and love about the game.

As a beginner, you could use a few extra tips to help you find your way. The most important thing is to have an open mind and be ready to sacrifice a little energy and time. For sure, you will gradually become a Sudoku guru.

Interesting related article: “Games you can play to keeep your mind sharp.”