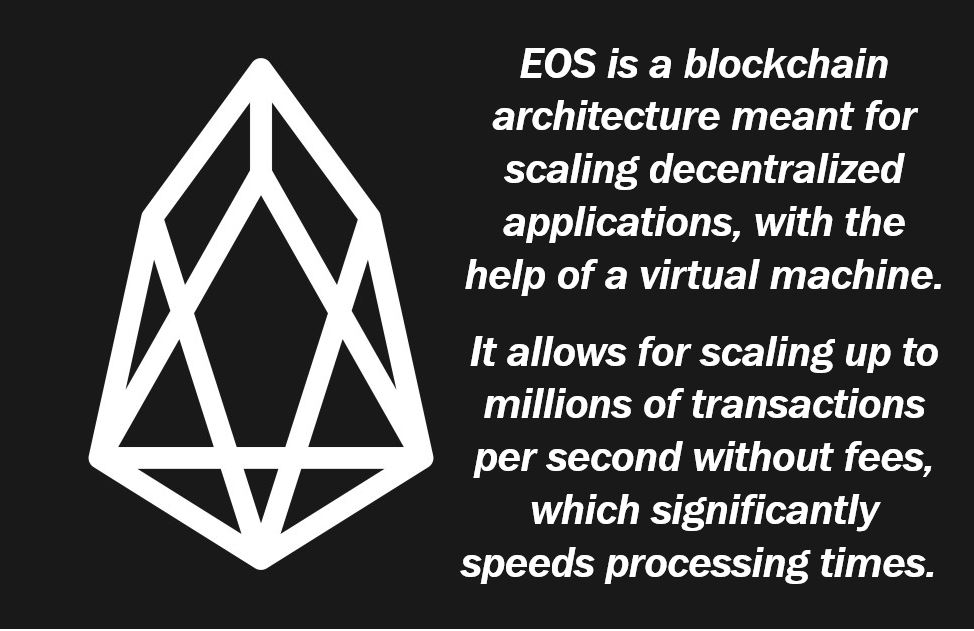 EOS coin currently belongs to the world’s top 10 crypto coins with the largest market cap. EOS is also a blockchain platform that claims to be the “Ethereum killer.” The project has been launched not long ago – in June 2017 – and has ambitious plans to become the most powerful and functional platform for the creation of decentralized apps.

It is a blockchain platform that uses the delegated proof of stake protocol (DPOS) and owns cryptocurrency, EOS. Both the platform and cryptocurrency are launched by the Block.one company, which registered in the Cayman Islands, with Dan Larimer as the leading developer.

At its core, EOS.io and the associated cryptocurrency is a blockchain based decentralized operating system designed to support commercial-scale decentralized applications that provide all basic functions (including databases, accounts with permissions, scheduling, authentication, and communication between the application and the Internet).

Thus, the developers focused on their own business logic. Simply put, EOS.io is software that allows companies to create blockchain applications similar to existing web applications by using the architecture similar to that of websites.

The platform has two key advantages as compared with its main competitor Ethereum:

High transaction costs and poor bandwidth are critical disadvantages of Ethereum, which is why these features give EOS a competitive advantage.

If you decide to trade EOS, you will get the following benefits:

However, trading these tokens carries risks, such as:

EOS is attractive to investors. It developed an innovative system of attracting third-party capital. The potential capabilities of the system are distributed among all network users according to the number of tokens available. So if a user has n% tokens, then they automatically get the right to manage the corresponding nth percentage of the resource, thus opening up a huge amount of opportunities for earning.

Token holders are also provided with such bonuses:

The Future of EOS

When making a forecast for EOS cryptocurrency, it is important to consider the fact that these are not just tokens. It is a demanded project designed to solve the key problems of blockchain technology and create a high-speed platform for transactions and project development.

At the start of token sales, their price was $1 per unit. In early 2018, the rate grew to $14.59. In 2018, experts predicted the growth of the currency to $ 25-50 per unit. However, as of July 2019, its price is only $4.80, and the currency has dropped from the 5th to the 7th position in the coin market cap rating. Maybe it was because of the criticism towards this controversial project. Therefore, now the rate of EOS coins depends only on the overall success of the project.

Video – What are Cryptocurrencies?

EOS coins, Bitcoins, Ripple, and Ethereum are types of cryptocurrencies. If you are not sure what a cryptocurrency is, watch this Market Business News video.