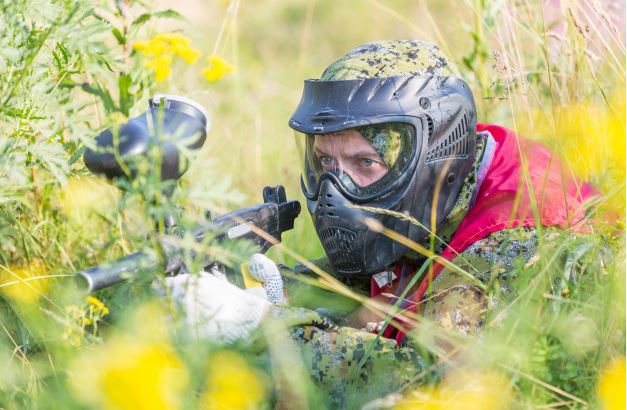 Playing paintball is a fun competitive sport to play with friends and family, but many people may not know that there are some tactics that not many people know about that can help your game skills go from amateur to pro.

In this article, we’ve labelled some tips + tricks you may or may not have known. These are guaranteed game changers and when used correctly the paintball games will always be in your favour!

Many new players when playing paintball tend to stay in one spot to avoid getting hit as much as possible which is a good plan because you want to enjoy the game as much as you can but to win this way is hard.

The reason this is a hard way to win is that when the opposition team decides to advance, you are stuck in one spot, making you an easy target because it’s easy to get surrounded.

So, when playing paintball and there’s a game mode like capture the flag, rather than sitting in the back keep moving and use the surroundings as cover, you’ll be in the action and a great asset to help your team win. When moving around a lot, it’s best to keep stealthy to ensure the enemy team doesn’t spot you.

When playing paintball people tend to not play aggressively. This is because many people are new players or don’t want to get shot. However, done correctly it’s easy to win the game being a bit aggressive.

Making the game fast-paced makes it much harder for the opposition team to push through and pick players off, this is because when playing teamwork and communication is essential. Pushing forward means the opposition won’t have that much ground left to cover meaning you’ll be able to pick them off, winning the game in the first few minutes.

Remember when playing aggressive it’s about trial and error. It is very hard to be successful at it for your first time but when you do, you’ll be the best player on the field.

Confusing your opponents is a good way to play the game because you’ll be using the element of surprise. You can do this by firing shots randomly and hiding in certain places the opposition won’t notice.

Playing stealthily also helps to confuse the opponents because they won’t be able to hear you, meaning you have the advantage.

Using the element of surprise in a game can be a game-changer because throwing your opponent’s off guard and picking them off can make you win the game a lot faster, and their game plan will fail.

Paintballing with friends and new people is always fun, a major part of that is teamwork and communication.

Paintballing is a great way to find new friends. When paintballing many people use game plans by giving each team member a role for example: Capture the flag 2 people push and 2 stays at the back for defence, when given a game plan it’s much easier to win.

Communication is key when playing because you may not be able to see your teammates but using your voice will help by telling teammates where to go and where the enemies are. But most of all have fun.

An important factor for paintball is having good field awareness this means being aware of what’s always happening in the game. Players who have a lot of experience from playing paintball will acquire this skill because they would know the maps by now, game modes, and how different players play.

This also counts as being aware of your surroundings. This means to pay attention to the oppositions to make sure they don’t sneak up on you and your teammates. When playing a map with a lot of good spots to hide you better be careful when checking corners because there may be someone waiting for you.

To avoid this when playing tread carefully and make sure to always know where the oppositions are and look out for your teammates.