There are many cities around The United States that will leave a lasting impression. An impression that is so strong that you think about the city even after you even leave the destination. You can still hear the music, taste the food, and dream of the ambiance.

One of the top cities that will leave a lasting impression is New Orleans, Louisiana. This city is known by many just as the home of Mardi Gras, but what many people do not realize is that New Orleans is so much more. This city definitely deserves its notoriety.

New Orleans is the home to Jazz music, hurricane drinks, char-broiled oysters, various spiritual beliefs, and beautiful architectural design with influences of Spanish, French, and Caribbean architecture. No matter what street you walk down, you will be surprised with the experience you will have and what you find.

Over time, there have been many extremely memorable billboards pop up around New Orleans. Many of these billboards do not just advertise products of brands, but also showcase how passionate the people of New Orleans are.

Here are a few of the most memorable billboards in New Orleans:

No One Messes With The Saints 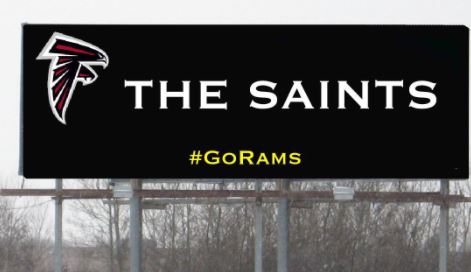 Everyone knows that the people of New Orleans are very passionate about football and their team, the New Orleans Saints. Do not mess with the Saints or a Saints Fan. Years back, there was a Superbowl match where many believed that the Saints received unfair calls from the referees throughout the whole game.

In turn, shortly after that game was over, billboards began to pop up in New Orleans and other cities showing the protest and how the fans believed the game was rigged. Many of the billboards that popped up during this time displayed text that the “Saints got Robbed”.

Are you are wandering around New Orleans, you may see there are many religious billboards around the city. The topic of the billboards is either promoting the actual congregation or is used as a tool to promote religious beliefs on what some may consider controversial topics like abstinence or reproductive rights.

Many know Louisiana to be a red state but as the demographics of any city change, there are outside influences molding the minds of many Americans and potentially opening up the discussion and different ways of thinking. Throughout the year and more so during the election season, many political billboard and outdoor advertising

As you drive around New Orleans, you will see many billboards promoting musicians, professional athletes, music festivals, and other events. These billboards will show off iconic personas.

These billboards will make the potential customers aware of upcoming shows at popular venues around the city. The advertisements will drive ticket sales and tourism into the city.

New Orleans is known for its regional cuisine. Items like charbroiled oysters, hurricanes, creole, po’ boy sandwiches, and beignets are at the top of the list. New Orleans has a great fine dining and culinary scene as well. It is the home of celebrity chef Emeril Legasse. There are billboards around the city advertising everything from fast food to fast-casual to fine dining restaurants.

With all of the tourists and business travelers coming into town, the visitors will begin seeing advertisements shortly after getting off the plane and will see billboards as they drive into the New Orleans downtown area. These advertisements may influence their decision on where to eat, what to eat, and what to drink.

Why Choose New Orleans For Your Outdoor Advertisements?

When deciding where the best placement of your advertisements will be, consider New Orleans billboards. New Orleans is the largest city in the State of Louisiana. Although the population of New Orleans doesn’t compare to some of the major cities in the United States, there are approximately 360,000 people living in the city.

In addition to the local population, the city of New Orleans is a hot destination for travelers all around the world. Many people will visit New Orleans for conferences, meetings, sporting events, or even the annual New Orleans Jazz Festival.

With all of these residents, visitors, and impressionable young minds of America, New Orleans is one of the top places where you can display outdoor advertisements.

Interesting related article: “What is Advertising?“