US Cities With the Most and Least Traffic in 2022 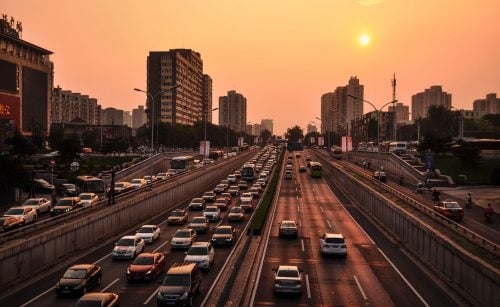 Driving is one of those things that give us a sense of freedom. To know that you can go anywhere at any time without depending on anyone is the best feeling. Add to this pleasant weather and a good playlist, and what can go wrong? Well, the traffic! While the US has some of the best roads in the world, it also has some cities with the worst traffic.

If you are searching for ‘what U.S. cities have the worst traffic?’, you have landed on the right page. You can divide the US population into two categories. One that loves driving and the other who finds it frustrating. Now, these two are purely circumstantial. If you are driving on the outskirts, you would love the experience. However, if you are driving in major metropolitan areas, trust me, it does get frustrating.

Your driving experience in the US can vary greatly from others. The city you are driving in plays a great role in it. If you drive in any of the cities below, I understand your frustration. The cities with the worst possible traffic are:

New York, also known as the Big Apple, is a place where dreams come true, only if you don’t get caught in the traffic! New York is known for its museums, a great subway system, and high-rise buildings. It has been ranked number one for public transportation. It also tops the list for worst traffic.

If you live in New York, you are bound to experience a yearly delay of 56 hours. Your vehicle is also bound to consume 23 gallons of excessive fuel.

Boston, MA, was founded in the 1630s and is thus, one of the oldest cities in the U.S. This city is known for many things, including great museums and educational institutions. Boston is also home to one of the worst traffic in the country. That is why we have placed it in second place.

If you live in Boston, you are bound to experience a yearly delay of 50 hours. Your vehicle is also bound to consume 20 gallons of extra fuel.

Houston, Texas, is most famously known for being Beyonce’s home. Apart from that, Houston is known for its population. This city stands in the fourth rank when it comes to population. Considering that, it is no surprise that Houston has one of the worst traffic in the U.S.

If you live in Houston, you are bound to experience a yearly delay of 49 hours. Your vehicle is also bound to consume 21 gallons of extra fuel.

If you live in Los Angeles, you are bound to experience a yearly delay of 46 hours. Your vehicle is also bound to consume 17 gallons of extra fuel.

The Nation’s capital comes fifth on the list of the cities with the worst traffic. This metropolitan city has traffic from locals as well as tourists. Being the capital, Washington is home to the White House and many other tourist attractions. This adds to the already existing traffic.

If you live in Washington, you are bound to experience a yearly delay of 42 hours. Your vehicle is also bound to consume 16 gallons of extra fuel.

The surveys that tell us about traffic per city rank them from worst to less worst. This is because no traffic can be considered the best. However, let us take a look at some cities that have better traffic conditions than the rest. According to a survey conducted by TomTom, these are the US cities with the least traffic in 2022:

Bottomline on US Traffic in 2022

It is time to wrap up! I have given you the names of the US cities with the worst and the least traffic. These cities experienced a fall in traffic in 2020 due to the pandemic. However, within two years, the traffic is back on the rise.