Are vapes a safe alternative to smoking? 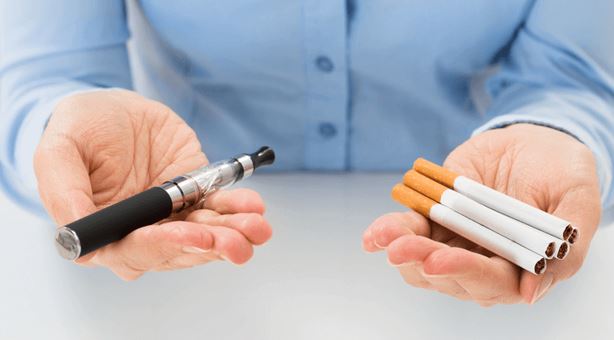 Electronic cigarettes are known as vape devices and they come in various shapes and sizes. These are sold in the marketplace as an alternative to tobacco smoking. The liquid inside a vape device; the e-juice, has a fruity smell and has many flavors such as mango, mint, strawberry, melon, and cool cucumber. Even though they are supposed to reduce tobacco smoking, or eliminate it altogether, the US Food and Drug Administration (FDA) still refers to e-cigarettes as tobacco products.

Parts of the electronic cigarette

An electronic cigarette is made up of a mouthpiece, an atomizer, the battery, the sensor and the refill solution.

The mouthpiece is a cartridge attached to the end of the tube. It has a smart plastic cup inside it. The cup contains an absorbent material soaked in a liquid solution.

The liquid is converted into vapors by the help of an atomizer which heats the liquid making it inhalable.

The atomizer is operated by the help of a battery.

A sensor is attached which activates the atomizer on the stimulus by the sucking of the user.

The solution consists of an electronic liquid or electronic juice. The e-liquid is the combination of three items; nicotine, a suitable base and the fruity flavors.

The user sucks on the mouthpiece which stimulates the sensor to activate the atomizer. As a result, the liquid turns into vapors and is inhaled by the user. The amount of nicotine in the e-cig can be adjusted according to the taste of the user.

The manufacturers of e-cigarettes claim that vaping is a harmless alternative to tobacco smoking. However, studies have shown that they can cause some risks to the health of non-smokers. Vaping can be useful for people who want to quit tobacco smoking, but it is potentially dangerous for those who are not regular traditional cigarette smokers.

Why should one avoid vaping?

There are many reasons to avoid vaping.  Let’s have a look at some of them:

They contain nicotine. Nicotine is a highly addictive chemical. Addiction experts say that it is more addictive than heroin.

It can influence the working of the brain. The chemicals in the vape device target the areas of the brain that are responsible for attention and learning. Vapers have a great risk of developing mood disorders. Some electronic cigarette smokers have been found to have problems with impulsive control.

Other than nicotine, the vapor in e-cigarattes also contains a large number of other harmful toxins. These include carcinogens, acrolein, benzene, diacetyl, propylene glycol, and even some of the harmful substances contained in tobacco smoke.

May prevent or delay giving up nicotine completely

When tobacco smoking addicts try to give up and swtich to electronic cigarettes, they continue to be dependent on nicotine. They have not broken free of their addiction. How many of those people would today be nicotine free if vaping products did not exist?

The smoke produced by the user can also be harmful to the non-smokers around them. Some of the chemicals in the e-cigarette’s vapor are the same as those found in tobacco smoke.

Many users like to experiment with their e-cigs, which may sometimes put them at risk. Dripping, for example, involves inhaling the vapor directly from the atomizer, which has a striking effect on the user’s throat.

Researchers have been carrying out several vaping studies in North America, Europe, and other parts of the world. One study found that vaping with e-juices containing nicotine can lead to powerful addiction, which may be even stronger than what tobacco smokers experience.

According to some studies, electronic cigarettes offer no health benefits for people who are looking for an alternative to tobacco smoking.

Interesting related article: “What is an e-Cigarette?“