A Brief Description of Waterborne Disease and Its Transmission, Causes & Prevention

A disease caused by the drinking of contaminated water is a waterborne disease. In other words, an illness caused by infection with pathogens that have contaminated the water supply; specifically, drinking water.

If left untreated, some waterborne diseases can be fatal. It is a major threat to human life globally.  According to the report by the World Health Organization (WHO), it claims the lives of over 3 million people annually. 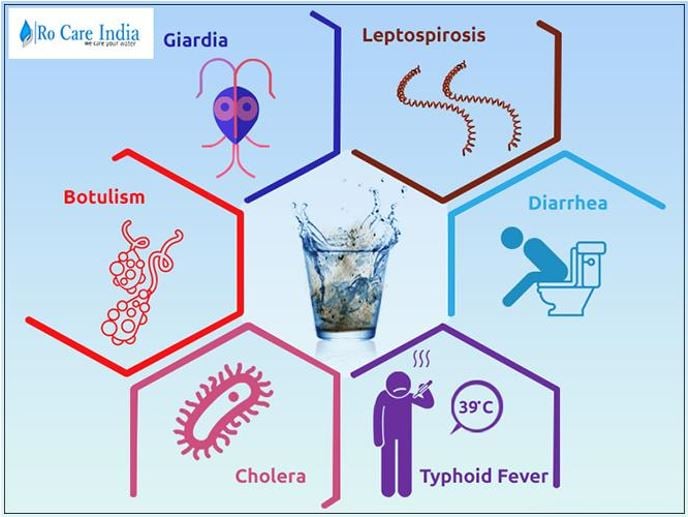 The leading cause of waterborne diseases is water pollution. Various kinds of pathogens, i.e., disease-causing substances, can contaminate fresh drinking water. As most substances dissolve in water, knowing whether drinking water is safe to consume is not easy.

Drinking contaminated water not only causes waterborne disease but can also weaken your immune system. The term immune system refers to the processes and organs in the body that provide resistance to toxins (poisons) and infection. These organs include the lymph nodes, bone marrow, and thymus. When your immune system weakens, you are more susceptible to being affected by diseases and developing infections.

Waterborne diseases are more dangerous for children than adults because a child’s immune system is still in the development stage.

How Do Waterborne Diseases Transmit?

Various kinds of agents or factors transmit waterborne sickness. Below is a list of the most common ones:

Drinking contaminated water is the primary cause. Water contains various kinds of a disease-causing agents, such as:

Waterborne disease is the leading cause of disease and death worldwide. The majority of affected humans are young children. The VOA states that approximately 4,000 children die daily as a result of diseases caused by drinking dirty water. Forty percent of people worldwide, particularly those in Asia and Africa, do not have access to clean drinking water.

Out of all waterborne illness, diarrhoea is one of the leading killers. Sixty percent of all deaths are diarrhoea related.

At any given time, nearly half of the developing world’s people are infected with some kind of waterborne disease.

How To Prevent Waterborne Diseases?

Waterborne diseases can easily be avoided by providing clean drinking water. Below are some tips:

Boiling water is an effective way to make sure it is safe to drink.  Historically, it has been the best way to avoid water contamination.

Make sure that all drinking water is properly covered. Keep it in a clean container. If you leave drinking water exposed, pathogens are likely to contaminate it.

Good hygiene is crucial if you want to protect yourself from waterborne diseases. Make sure you wash your hands with soap and water regularly, especially before consuming food or water.

Uncooked and roadside food may be heavily contaminated and could contain various kinds of waterborne disease-causing agents.