What happens if you cut your hair into a ponytail? 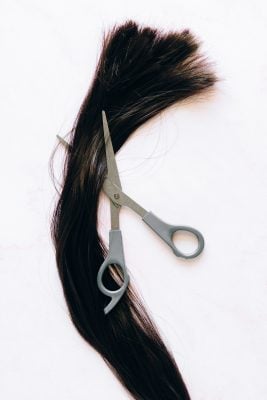 For some people, applying ponytail hairstyles with weave is a very bad idea. The only thing you will get is a messy cut, without saving any kind of shape from an aesthetic point of view. That is, you will get a cut in the form of a ladder, truly frightening. The only cuts that you should do with your own hands are the tip trimming or the gabled bangs. Any other cut should be done by a professional. Since when cutting the hair badly, using elements that do not correspond, such as any type of scissors, what you get is to damage the hair fiber. And with damage comes breakage.

If there is one thing that will never cease to amaze me, in most cases pleasantly, it is human creativity and ingenuity. I just saw countless videos on YouTube, of people who affirm and reaffirm that cutting hair in a ponytail gives impressive results.

Please don’t think so. Leave your creativity and ingenuity for more productive things. Because if you don’t, not only will you ruin the shape of your hair cut, but you can also damage the hair fiber.

The elements, such as scissors or knives that we use as stylists, are only used to cut hair. So if you were thinking of trimming your hair, using that multipurpose scissors, you can start to forget about it.

The scissors with which you cut the hair must have the right edge, so as not to hook the hair fiber and damage it. Also, if you cut your hair in a ponytail, the result will be a rather ugly and messy cut, because you would not know exactly how high you should raise it, so that it is nicely disheveled.

Go ahead, cut your hair into a ponytail and resign yourself to not being able to see yourself in the mirror for at least three months. If you want to experiment with your hair, you can try other less risky alternatives, such as a mid-length bob, changing the color of your hair, or trimming your bangs.

Does that innovative little voice inside you keep whispering in your ear that it’s a good idea to cut your hair into a ponytail?

Why you shouldn’t cut your hair into a ponytail

I will say it in a clear and resounding voice one more time. Don’t cut your hair into a ponytail. Banish from your life those tutorials with neon titles such as “super easy hair tail cut” or “messy your hair in a very simple way”, because they are not true and will ruin your hair. If everyone could simply cut their hair into a ponytail, what would become of hairstylists? What would be the point of studying the shapes and contours of the face, the symmetries, the different tones and undertones? If everything were that easy, hairdressers would disappear. But since it isn’t, here we are. Many times, as a last resort to solve the experiments that many women do at home.

But there is a safe solution for those of you who want a ponytail hairstyle!

There is always a way to Rome and when it comes to ponytail hairstyles, wearing a ponytail wig is the best solution. Nadula is the best ponytail wig provider that ensures you can change your hairstyle without worrying about the problems mentioned above.