What is an Oligarch? Definition and Examples

An oligarch is an extremely rich business leader who has considerable economic and political influence. The news media today uses the term a lot when talking about the multi-billionaire Russian businesspeople who are close to President Vladimir Putin. They emerged after the collapse of the Soviet Union.

We can also use the term when talking about a very powerful person in their industry. 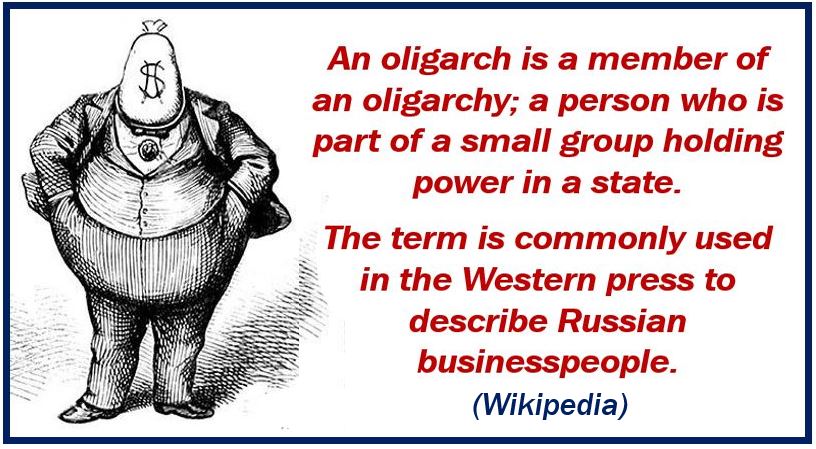 The Cambridge Dictionary has the following definition of oligarch:

“One of a small group of powerful people who control a country or an industry.”

An oligarch exists in an oligarchy

Oligarchs are the selected few individuals who influence a country’s leader(s) in an oligarchy.

An oligarchy is a society in which a few people have all the power. The leaders belong to a small privileged group. The members of this elite group, the oligarchs, typically use their power for the benefit of the group or personal gain.

Historically, the children of oligarchs were raised and groomed to become the inheritors of the oligarchy’s power. Oligarchies work much more in secret compared to aristocracies. Oligarchs prefer to operate behind the scenes, or more specifically, behind the throne.

Wikipedia has the following comment regarding the oligarchs of the Russian Federation (modern Russia):

“Since the collapse of the Soviet Union and privatization of the economy in December 1991, privately owned Russia-based multinational corporations, including producers of petroleum, natural gas, and metal have, in the view of many analysts, led to the rise of Russian oligarchs.”

“Most of these are connected directly to the highest-ranked government officials, such as the President.”

Etymology is the study of the history and origin of words, and how their spelling, meanings, and usages evolved over time.

The term oligarchy first appeared in the English language in the 1570s, with the meaning “form of government in which supreme power is vested in a small exclusive class.”

It came from the 14th century French word Oligarchie, which came from a Latinized form of the Greek word Oligarkhia, which meant “government by the few.” The Greek words Oligoi and Arkhein mean “few” and “to rule”, respectively.