What Security Guards Can And Can’t Do In California 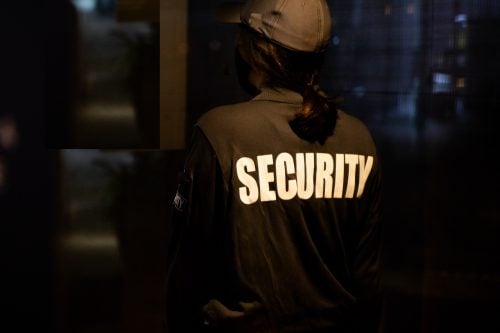 By law, the guards have certain rights and privileges, which in many cases are more than normal civilians. Sometimes, the company they work for also assign them certain duties, so you must be aware of their rights.

The guards can’t do certain tasks and engage in certain acts that are off-limits to their privileges. The guards can’t arrest civilians, can’t use excessive force, and can’t act as law enforcement officers. They must also keep their use of force on people clear of racial profiling and discrimination.

Thus, the guards can commit certain acts, some of which they must refrain from.

What Security Guards Can Do In California

Certain duties and roles that the security guards must act on in California include:

Protect People And Property From Harm

The officers must ensure they are doing everything they can to keep people away from danger and threats. They must ensure that people are safe from any danger to their life or property. They must also prevent any theft of people’s property and belongings.

Through their patrols and security surveillance, the guards can check on all the activity in and around an area. They must be vigilant on the job and keep a close eye on any anomalies in the normal routine in the area.

If they spot any such anomaly, they must immediately report it to the officers stationed with them and alert their superiors and higher authorities.

Timely reports by the guards can help apprehend criminals red-handed and prevent the situation from escalating.

The guards can catch criminals involved in any suspicious activity and apprehend them to get details.

If they recognize the direct involvement of the criminal in any activity, they can also detain them in temporary holding cells and alert the authorities.

Dealing with criminals beyond this point is the job of higher authorities, and the guards must not exercise their powers to harm the criminals unnecessarily in such conditions.

Private property is off-limits for normal people, and only those with access rights can enter such areas. Guards are stationed at these access points to check the identification of the people wanting entry.

It gives the guards a proper right to verify people before giving them entry. The guards must check the identification of all the people entering the area to ensure no trespassing occurs.

People should respect this right and not argue with the guards when their IDs are demanded.

Use Physical Force If Necessary To Protect Property Or People

Criminals, trespassers, and thieves can sometimes go to extreme limits to get their aim. They can hurt people and can even attack security guards to neutralize them.

In such cases, using physical force becomes essential since the guards can’t keep the criminals at bay without it. They have the right to use physical force to protect people from criminals or themselves in self-defence. The guards must also observe limits in such cases and refrain from using too much force.

What Security Guards Cannot Do In California

Guards on duty also have certain limitations, and they sometimes can’t engage and use their rights. Some of these situations are:

As we have already said, guards can sometimes detain people to apprehend them. But the guards don’t have the right to arrest anyone to protect others from danger. They can’t take any criminal to the police station and lock them behind bars. This is the job of law enforcement agencies like the police. Only such agencies have the power to arrest anyone.

The guards have to use physical force sometimes to keep criminals at bay. The guards’ force in these cases must be reasonable and within limits. They can’t use too much force, whatever the case, and can’t harm anyone too much to inflict permanent damage.

They must respect the sanctity of other people and should refrain from using excessive force.

The guards can’t arrest anyone. Similarly, they can’t carry out any investigations and can’t do any detective work.

This is the job of law enforcement agencies, and the guards must respect that. Guards don’t have the right to pose as law enforcement officers and demand their desired behaviour from people.

They must know their limits and always remember their security guard rights whenever they apprehend someone.

Carry Firearms Without Training Or Certification

Certain work conditions require the guards to carry firearms to the work site. The guards can only carry firearms in these cases when they have had the proper training to handle these weapons.

Having certificates signifying the guard’s rights to carry firearms is also necessary as these certificates show that the guards have taken the required training to carry these weapons and can use them responsibly.

Security guards can carry guns in California, but carrying any weapon without legal prerequisites is illegal, and the guards can be apprehended to justify their behaviour.

The guards must not discriminate against people based on race, colour, religion, or other characteristics. They must always be unbiased and only apprehend people based on criminal activity. Any other factor should not cloud the judgment of the guard, and everyone should be equal in their eyes.

Security guards play a very important role in preventing criminal activity and protecting people and their property from danger. They also keep a close eye on any suspicious activity in their area and protect businesses from external and internal thefts.

The guards also have certain legal limitations that they must obey during their duties. They must respect other people’s rights and not use excessive force on them. They must also not use firearms without having the training to do so and must not let racism or any discrimination get in their way. They must also not act as law enforcement officers.

Following these guidelines is important because it allows the guards to perform their duties better and keeps them away from legal troubles. People know what they can expect from guards thanks to these limitations, and the guards must obey them to keep up with these expectations of people.

Interesting Related Article: “Difference between a Concierge and a Security Guard“