What to see and do in Morocco 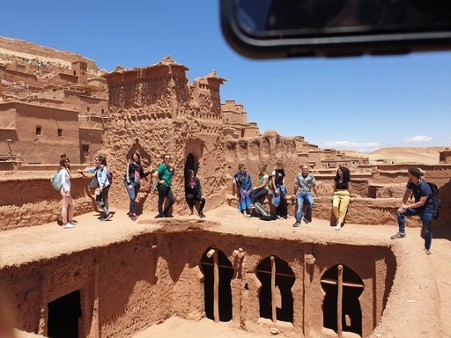 Morocco is increasingly visited by tourists from all over the world. Evil tongues say that it is a dangerous country, but people who have already had the opportunity to visit this territory tell only wonders about the charms of its culture, its gastronomy, its mosques, and all its spiritual essence. A safe trip full of culture and history just a hop away from Spain.

Morocco is a North African country popularly known for the influence of different cultures such as Berber, Arab and European. Morocco is divided into four imperial cities: Fez, Marrakech, Meknes and Rabat; and two commercial cities: Casablanca and Tangier. The first four are the most historical and cultural cities, which is why they are the most visited by tourists. There are more and more airlines that offer connections from various parts of the world to Moroccan cities, such as this airline called Royal Air Maroc, which gives the opportunity to fly to Morocco at affordable prices.

There are many reasons why Morocco is increasingly visited.

It is a country where the currency exchange rate usually favors the tourist, especially if we are talking about European travellers. The gastronomy is not to be left aside either, as Moroccan food has become one of the most sought-after delicacies in the world. The best known dish is the tajin, a lamb or chicken stew accompanied with vegetables and legumes cooked over low heat. The second star recipe is couscous, a semolina mixed with different vegetables.

Not only the gastronomy is an incentive for tourists from all over the world, but the variety of landscapes that can be found in Morocco increases the desire to know this country in depth. The variety of places it offers to its visitors has made it one of the most attractive destinations for tourists. From those who want to go into the desert, to those who prefer a beach atmosphere; likewise, there are those who take the opportunity to visit mosques, souks (Moroccan markets), and the medinas of the main cities of the country.

Although there are many places to visit in Morocco, we will highlight five of the most emblematic places in the country, either for their cultural richness, their particular charm or their historical influence. We recommend renting a car in Morocco to make it easier to move from one city to another, so you can visit as many places as time allows.

The city of Fez is popular for its ancient walled center, being compared to the city of Jerusalem. Its historical importance is more than remarkable, since its beginnings date back to the eighth century, being also a pioneer in Muslim worship in Morocco. At the academic level, the Universities of Fez have made a place in the lists of the oldest in the world. The cultural and spiritual charge that has been given to Fez is more than deserved, because for the most curious tourists in search of knowledge and learning, it has become an important seat of knowledge. To find out all about it, discover what to see and do in Fez.

Marrakech, the imperial city that gave its name to the country

Marrakech is the city that gave its name to the country, so that it is, today, one of the most popular places in Morocco, standing out above its capital. It is the most visited and known city in the country because of the large number of tourists arriving daily. The popularity that has reached this city is due, in part, to the multitude of markets and festivals that are present on a continuous basis. It is an area of Morocco that stands out for its vitality and freshness. There is always something to do or visit in Marrakech, both because of the active and lively lifestyle of the citizens and the frequency of tourists in search of cultural, historical, artistic and nightly entertainment. Some of the most famous monuments of the city are the Jamaa el Fna Square, the Souk, the Koutoubia Mosque, Bahia Palace, Medersa Ben Youssef and the Saadies Tombs. As we said, these are just a portion of its charms; to know them all see our article on what to see and do in Marrakech.

Rabat, the administrative capital of Morocco

For history lovers, Rabat is undoubtedly the ideal destination. It is the fourth imperial city of the country, a surprising blend of historical tradition and modernity. Abd al-Mumin was the founder of Rabat in the 12th century, using his famous fortress as a base to confront the Spanish. Some of the most emblematic buildings in the city are the Hassan Tower and the Kasbah des Oudaias. The Medina area, located by the sea, is usually the most visited, although it is not crowded as it is in the center of other Moroccan cities. The Medina is surrounded by walls that were built by the Andalusians expelled from Spain, where there are three gates: Bab Bouiba, Bab Chellah, and Bab Mellah. In addition, the mosques of Jemaa de Muley Sliman and Jemaa Kebir, built in the fourteenth century are the most recommended for its beauty and grandeur. A very enriching visit for history lovers.

Ait Ben Haddou, the most iconic Ksar of Morocco

Ait Ben Haddou is the most emblematic Ksar of Morocco. A Ksar is a fortified village made up of Kasbahs made of sand, clay, water, straw and/or dung. It is a way of building dwellings from organic materials from the soil itself, molded and then dried in the sun. Hence the feeling that the construction emerges from the landscape itself. The city demands continuous maintenance and restoration, as a place of such charm cannot fade away. The most curious tourists are those who visit this unique scenery in order to discover landscapes that are difficult to find, which, undoubtedly, do not leave indifferent.

Asilah, the pearl of the Atlantic

Asilah is a small Moroccan town located on the Atlantic coast, between Tangier and Rabat. It is highly visited in summer by tourists, both Moroccans and foreigners, looking for a relaxed atmosphere, maritime gastronomy, tranquility and fine sandy beaches. It has Portuguese influence, which makes it a very culturally rich place, as evidenced by the Portuguese walls surrounding the famous and emblematic old town. Next to them are numerous white houses with deep blue details on the edge of the sea, a spectacle for the eyes of its visitors.

Tangier, the most European Morocco

This Moroccan city, located in the extreme north of the country, is one of the best known and most touristic places, probably due to its traditional cosmopolitanism. Among its charms highlights the Grand Mosque (built in the seventeenth century), the Great Souk, the medina (the historic area) and the Ville Nouvelle, built by Europeans during the twentieth century around the famous Place de France. The Mendubia Park is a quiet and peaceful area, perfect for recuperating. And, if you want to get into the New City, nothing better than walking along the Boulevard Pasteur and contemplate the Gran Teatro Cervantes, a modernist-style building resulting from the Spanish administration of the city.

Casablanca, the most cinematographic

Casablanca is the most cinematographic of Moroccan cities, but it could justly be one of the most cinematic cities in the world. Whether you are a fan of the movie of the same name or not, it never hurts to drop by Rick’s Cafe, which recreates the famous nightclub run by Bogart. But Casablanca is much more than its cinematic myth. You can visit monuments of great artistic quality such as the Hassan II Mosque and the Old Cathedral of the Sacred Heart. Why old? Well, because after the country’s independence in 1956, this temple was converted into a cultural center, a function it still retains today. Anyway, its beautiful neo-Gothic style still looks as impressive as the first day.

This mountain range crosses the country diagonally creating some mild and Mediterranean climates. And also localities of great charm and picturesqueness. It is the highest mountain range in North Africa, with peaks that can exceed 4,000 meters in altitude. Traveling it can be a great plan if you want to know the nature of the country and explore it further. You can do this by starting your engine and hitting the N9, the road that runs through the mountain range. The views are breathtaking, and you will be able to enjoy from its beautiful landscapes to the snow-capped peaks of the mountain range. The landmarks of this route are, among many others, the Draa Valley, the Skoura palm grove and the Sahara Desert. That’s nothing!