Why is Racism Bad: Top 5 Effects of Racism on Mental Health 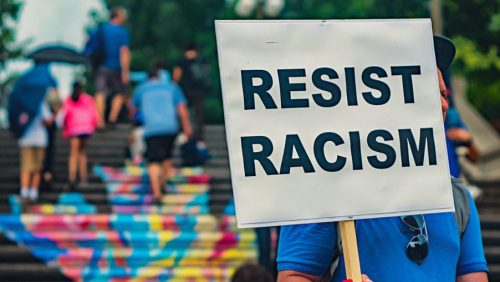 “Resist Racism” by Obert Madondo is licensed under CC BY-NC-SA 2.0

Racism has existed for generations and caused so much pain for many nations, societies, families, and individuals. Studies show that racism has a huge effect on mental health, something most people don’t know about. This article examines some of the little-known effects of racism on mental health.

A 2015 study linked racism to anxiety and low-self esteem. According to the study, individuals who had been racially profiled in the past reportedly struggled with anxiety, especially when encountering particular triggering situations, such as police officers, political opponents, public officials, and other members of society.

The study also confirmed a relationship between racism and psychological stress. Though unrelated to the study, most victims of racism often become stressed, which later develops into depression and self-doubt. As a result, such individuals often need regular counseling to regain their confidence.

Some common symptoms of racial trauma include:

PTSD is one of the most devastating effects of racism on mental health. This is because PTSD is much more difficult to control. It takes months or even years of counseling and therapy to reestablish a positive attitude and learn how to deal with racism. Most individuals who have PTSD triggered by racism also often have a rough time trusting and interacting with individuals from other races.

In 2020, the American Psychological Association published an astonishing report on the rising cases of suicide among black youth. The report linked racial discrimination, among other challenges, to the increasing number of suicidal thoughts and attempts among African American children in the United States.

Some victims of racism may develop internalizing behavior. One of the little-known consequences of racism, this behavior involves difficulty coping with stressful situations or negative emotions. As a result, the victims redirect their feelings inside.

For example, some victims may not know how to deal with racism. So instead, they’ll blame themselves for the racial abuse or avoid visiting places they have a high chance of being racially abused.

How To Deal With Racism

Sadly, racism is a big problem in most parts of the world. And if you’ve ever been racially abused or discriminated against, you know how much it hurts. However, the most important thing to remember is that you are not the problem; racist people are.

In addition, you should never fight hate with more hate. For this reason, we’ve compiled some tips to help you or a loved one deal with racism and its adverse effects on your mental health.

Internalizing your experiences could make things even worse. Instead, speak to a friend, family member, counselor, therapist, or other people you feel safe opening up to.

Realize Your Self Worth

Don’t let racist individuals make you doubt yourself. Rather, remind yourself that no race is superior to the other and that you are worthy of every opportunity regardless of your skin color. To further boost your self-confidence, check out these 30 racism quotes to help fight prejudice.

It’s not uncommon to feel isolated when you are a victim of racial abuse. To conquer this feeling, seek peer support from friends, family, or a support group to speak against racism. This kind of support can also help improve your mental health and teach you to appreciate yourself even more.

Racism is all about hate and prejudice. So when you encounter racism, retaliation is probably the first thing that comes to your mind. But one thing you need to know is that retaliation only enables the other party. For this reason, you should always find a way to fight hate with love even when the circumstances don’t allow it. And when you feel tempted to fight hate with even more hate, remember the words of legendary American civil rights activist John Lewis:

Studies show that daily affirmations can boost your confidence and make you feel better about yourself regardless of what’s happening around you. If you ever need to stay motivated and inspired daily, TurtleQuote.com has some great quotes worth checking out.

Racism has no place in modern society. But, the sad truth is that racist people do exist, and their actions cause so much pain and suffering to others. However, now that you know the effects of racism on mental health, the best way to rise above it all is by being the better person and fighting hate with love.

Interesting Related Article: “What is generalization?“