Aerogel made from recycled plastic bottles has many ‘exciting uses’

Engineers in Singapore have found a way to recycle plastic bottles into a highly versatile “supermaterial.” They see uses ranging from gas masks that absorb carbon dioxide to safe and light coats for firefighters, and sound proofing materials.

The new method is the first in the world to make aerogel from recycled plastics.

The team, from the National University of Singapore (NUS), says that it could help to reduce the environmental impact of disposable plastics. 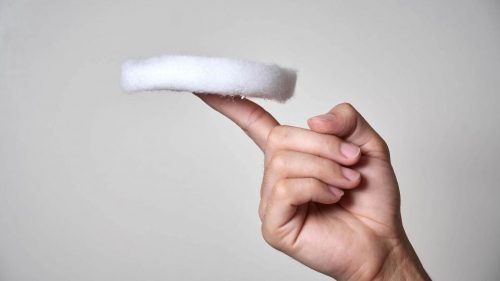 Aerogel made from recycled plastic bottles has many useful applications. Image: NUS

Plastic waste does not biodegrade. It usually ends up in landfill sites and oceans where it contaminates groundwater and affects marine life.

By 2021, global use of plastic bottles is likely to exceed half a trillion tons per year.

Using PET – the most recycled plastic in the world – as the main ingredient also makes the aerogel soft, durable, versatile, and flexible.

He explains that the technology that they have developed at NUS is “easily scalable for mass production.”

A single PET bottle, he adds, “can be recycled to produce an A4-sized PET aerogel sheet.”

Dr. Duong is an associate professor at the NUS. He and Prof. Nhan Phan-Thien, also of the NUS, led the development team.

You can read a paper about the work in a recent issue of Colloids and Surfaces A: Physicochemical and Engineering Aspects.

By applying different surface treatments, the aerogel can be used in many different ways. If, for instance, the surface has various methyl groups, it can absorb large amounts of oil.

Its ability to mop up oils, such as in oil spills, could be as much as seven times greater than current products, says the team.

But what seems to most excite them is the potential for using PET aerogel as a light, highly heat-resistant material.

Nhan says that using PET aerogels coated with fire retardants could help make “much lighter, safer, and cheaper” coats for firefighters. In could even be made into “low-cost heat-resistant jackets for personal use.”

Coating the PET aerogel with fire-resistant chemicals made it withstand temperatures as high as 620°C.

This is seven times higher than the temperatures that current firefighter coats are normally designed for. Plus, coats made from the new material would be 11 times lighter than those.

Coating the aerogel with “an amine group” made it able to absorb carbon dioxide as well as materials currently used in gas masks.

Including sheets of this type of PET aerogel could make dust particle masks double as carbon dioxide filters.

“In places like Singapore with many high-rise buildings, both the carbon dioxide absorption masks and heat-resistant jackets could be placed alongside fire extinguishers to provide added protection to civilians when they escape from a fire, Nhan explains.

It could also be used in masks that protect against air pollution, allergy-causing particles in the air, and other health hazards, he adds.

He and his colleagues have filed a patent for their technology and are planning to improve it and find further uses.