How secure do Americans feel about their financial security?

Americans expect home prices to increase over the next year.

However, they are also feeling less comfortable about their total amount of debt and the amount they have in savings compared to last year.

Americans in the upper-middle-income bracket were the most optimistic about the future housing market (with 65 percent expecting prices to rise).

Since the U.S. market bottomed out in October 2011 there has been a steady rise in home values.

A previous report by Bankrate revealed that nearly a quarter (23 percent) of Americans see real estate as the “best way to invest money not needed” for more than a decade. 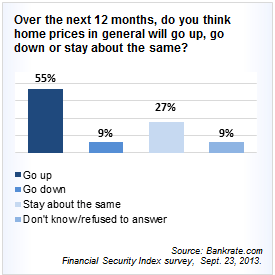 “It seems like Americans’ love affair with real estate has returned. But there are still some clear headwinds, including rising mortgage rates, stubbornly high unemployment and the relatively low U.S. household savings rate.”

American financial security turned negative for the first time since February in September, dropping down to 99.5 from 100.5 in August.

In addition, the percentage of Americans feeling less comfortable about debt is higher for September this year compared to last year (21% versus 17% respectively).

More people are feeling less comfortable about the amount of debt they have:

The report revealed that Americans are feeling less comfortable with their savings compared to last year. 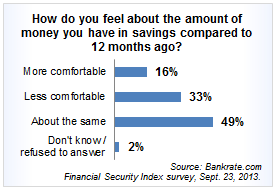 The survey was carried out by Princeton Survey Research Associates International (PSRAI).