New research from Germany suggest that aphids can form their own niches and alter plant sap or phloem quality when they infest a plant.

Plant sap composition can vary between different individuals of a plant species and even in different parts of the same plant. 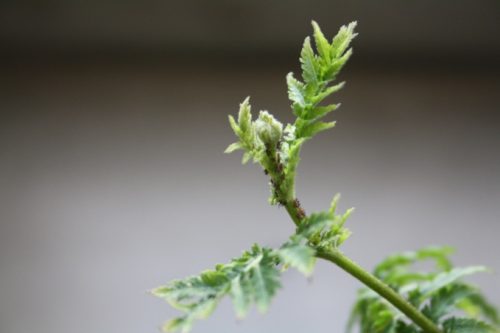 Aphids – like these on a budding stem tip of a tansy – can change the plant sap of plants that they infest. Image: Bielefeld University / Jana Stallmann

Scientists already knew that variation in the nutritional composition of phloem affects aphids and, conversely, that infestation by aphids affects the composition of plant sap.

But what the new study from Bielefeld University in Germany reveals is that different aphid species alter phloem quality differently and that they prefer to do this on specific parts of the plant.

Prof. Caroline Müller of the Department of Chemical Ecology at Bielefeld University likens the aphids’ behaviour to that of beavers “that settle in the dams they have constructed themselves.”

She and her team report their findings in a paper published in the journal New Phytologist.

Aphids are small insects that feed on the sap of plants. There are hundreds of species of aphid and they come in many different colours. Their colour sometimes determines their common name, for instance greenfly and blackfly.

As far as aphids are concerned, the nutritional quality of a plant depends on the amount of sugar and the mix of amino acids in the phloem.

The researchers carried out experiments using Tanacetum vulgare (tansy) plants and two types of aphids that infest them: Macrosiphoniella tanacetaria and Uroleucon tanaceti.

They used two “chemotypes” of tansy – that is the plants were of the same subspecies but differed in terms of the monoterpenoid composition of the leaves .

The team put the aphids on different parts of the plants – such as on old and young leaves and near the buds of stems – and monitored their growth.

The researchers also measured the chemical composition of the phloem the insects fed on, noting the relative concentrations of sugars, amino acids, and other substances.

‘Construct their own niche’

Infestation by the insects also had distinct effects on plant sap. It led to “distinct changes,” note the authors, on the composition of “metabolite classes” in the plant sap, “differing particularly between plant parts but less between chemotypes.”

For instance, infestation near the bud by M. tanacetaria altered the sugar and organic acid composition of the phloem.

But infestation by U. tanaceti on old leaves raised plant sap concentration of amino acids.

“These changes,” the team concludes, “may indicate that aphids construct their own niche, optimizing the food quality on the plant parts they prefer.”