Can bees become ‘addicted’ to pesticide?

New research on how bees respond to pesticide over time supports the idea that the pollinating insects could become addicted to it.

Scientists from Imperial College London in the United Kingdom found that bee colonies showed a preference for food contaminated with neonicotinoid pesticide the longer they were exposed to it. 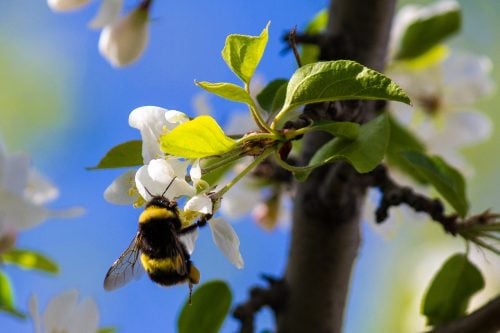 It has been suggested that exposure to pesticides could be behind falling bee numbers. Image: pixabay-1406467

They suggest that the risk that pesticide poses to bee colonies could be greater than previously thought. It could, for instance, affect the ability of colonies to reproduce.

In a paper on their work that was recently published in the Proceedings of the Royal Society B, they conclude that “foraging bees may actively seek out neonicotinoid-treated flowering crops or contaminated wildflowers as the season progresses.”

The finding is important because while farmers rely on pesticides to secure crop yields, there would be no crop at all without pollinating insects.

The importance of pollinators

Around three-quarters of flowering plants on our planet and 35 percent of our food crops would fail without pollinators such as bees, moths, butterflies, beetles, other insects and even bats and birds.

When bees visit the flowering parts of a plant to collect nectar, pollen sticks to the hairs on their bodies and rubs off when they visit the next plant.

In this way, pollen from one plant fertilizes another plant so it can fruit and make seeds. This is the only way that many plant species can reproduce.

However, despite their importance as pollinators, bees are under threat all over the world. Like bats, their populations are in decline. Some reasons for this include loss of habitat, parasites, and harmful substances.

It has been suggested that exposure to pesticides could be another reason for the decline in bee populations.

Bees forage in areas where pesticides are sprayed all year round and traces of the chemicals have been found in their nectar and pollen and in food stores inside their colonies.

In addition, some studies have suggested that exposure to pesticides at levels typical of those applied to crops “affects bee fitness,” note the Imperial researchers in their study paper.

So, to investigate this further, they decided to look into pesticides called neonicotinoids.

There is currently a heated debate going on as to whether neonicotinoids harm bees or not.

These controversial pesticides are widely used, although they are nearly totally banned in the European Union.

Their effect on insects bears similarities to nicotine in mammals in that they target similar receptors in nerve cells.

Until the recent study, most studies on bees and neonicotinoids have fed the insects only with food containing pesticides and then done comparisons.

But in real life, bees have a choice of what to feed on. So, the team wanted to find out whether the bees could tell the difference between plants with and without pesticide and whether they would learn to avoid the ones with it.

For 10 days, they keep track of bumblebee colonies in controlled environments, with each colony having its own foraging area.

In these environments the bees could access sucrose feeders placed at various distances. Some of the feeders had no pesticide in, while others were laced with various concentrations of neonicotinoid. The bees were free to choose which feeders to feed from.

The results showed that in the first few days, the bees tended to choose feeders in which the sucrose was pesticide-free.

But, as time went by, the bees showed an increased preference for feeders containing sucrose laced with neonicotinoid. They did this even when the feeders were repositioned, which suggested that they could detect pesticide in the sucrose.

Matches some ‘symptoms of addiction’

However,” he adds, “as individual bees increasingly experience the treated food they develop a preference for it,” noting that such behaviour matches some of the symptoms of addiction.

Added to work done by others, this finding should help to “properly assess the risks of exposure and not just the hazard posed,” says Gill.

He and his colleagues now plan to find out which mechanisms could explain why the bees developed a preference for pesticide-laced food.