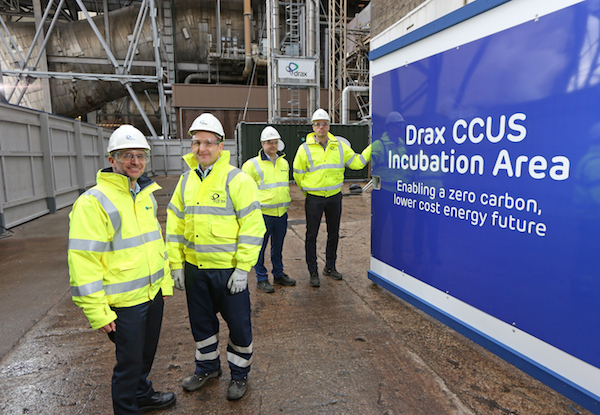 It is the first time carbon dioxide released from the combustion of a 100% biomass feedstock has been captured.

The technology could see the station, which provides about 6% of the UK’s electricity, become the first negative emissions generator in the world.

Energy companies are actively trying to find ways of cutting carbon dioxide emissions whilst keeping electricity supplies in check when renewable sources (solar, wind) are limited by factors such as weather.

“This innovative technology has the potential to make huge strides in our efforts to tackle climate change while kick-starting an entirely new cutting-edge industry in the UK,” said Britain’s energy and clean growth minister Claire Perry.

Wood-burning is considered carbon neutral as no extra carbon dioxide is emitted into the atmosphere. This is because over the course of a tree’s life it absorbs as much carbon as it releases when burnt. Drax is essentially taking this a step further, making the process carbon negative by capturing the carbon dioxide that is released from combustion.

Bioenergy with Carbon Capture and Storage (BECCS) from Drax Group on Vimeo.

Drax said in a news release: “Engineers began commissioning the pilot plant in November with the first carbon now being captured, proving that the proprietary solvent developed by C-Capture can be used to isolate the carbon dioxide from the flue gases released when biomass is used to generate electricity.

“Data being obtained about the CO2 capture process will continue to be analysed throughout the pilot to fully understand the potential of the technology and how it could be scaled up at Drax. Part of this will include identifying and developing ways to store and use the carbon dioxide being captured.”

Will Gardiner, Drax Group CEO, said: “Proving that this innovative carbon capture technology works is an exciting development and another important milestone in our BECCS project. Climate change affects us all so this is of real significance – not just for us at Drax, but also for the UK and the rest of the world.

“The successful deployment of BECCS requires us to identify ways in which the carbon dioxide we’re now capturing can be stored or used in other processes and we’re working with the government and other businesses on that.

“We’re focused on working together to make the progress required for us to tackle climate change and enable a zero carbon, lower cost energy future.”

The Royal Society and Royal Academy of Engineering estimates that BECCS could allow us to capture 50 million tonnes of carbon dioxide per year by 2050 – approximately half the UK’s emissions target.

Chris Rayner, founder of C-Capture and Professor of Organic Chemistry at the University of Leeds, said: “This represents a major milestone on the road to achieving negative emissions through BECCS, which is going to be so important in the future. To see our technology working in a real environment like Drax is a tribute to the fantastic team of chemists and engineers who work on the project.”