Contact lens could be your computer screen say Australian scientists

Imagine a contact lens that serves as a computer screen – no more need for tablets, laptops or monitors, because it could all be done right on the surface of your eye. That is what researchers at the University of South Australia said will soon revolutionise wearable technology.

Scientists from the Future Industries Institute (FII), part of the University of South Australia, say their latest breakthrough will transform the common contact lens into the next generation of wearable consumer electronics.

Study leader, Associate Professor Drew Evans and colleagues have written about their research in the scientific journal Applied Materials and Interfaces (citation below).

According to Pure Optical, a contact lens is a thin curved lens that covers the surface of the human eye. Most contact lenses are made of silicone hydrogel. People with eyesight problems such as astigmatism use them instead of glasses. 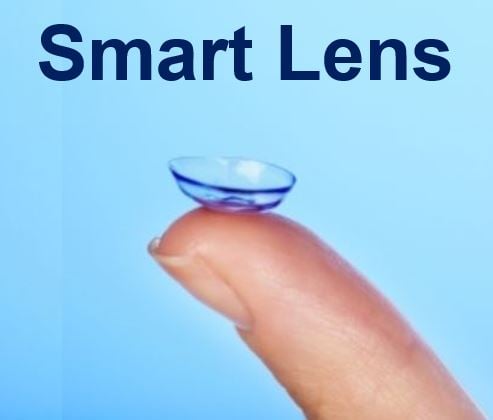 The wearable hi-tech contact lens will bring the human user and his or her smart devices much closer together, the researchers said. (Image: unisa.edu.au)

They say they have successfully completed ‘proof of concept’ research on a polymer thin-film coating that can conduct electricity on a contact lens. They add that their lens has the potential to have miniature electronic circuits built onto it, and insist they are completely safe for whoever wears it.

Prof. Evans says the breakthrough technology will probably provide one of the safest methods to bring humans and their smart devices much closer together.

“We have always known that our film coating technologies had potential for many applications and now we have taken that a step further by proving that we can make biocompatible, conducting polymers at the nanoscale and grow them directly on a contact lens.” Dr. Drew Evans is an Associate Professor of Energy and Advanced Manufacturing at the University of South Australia. He specialises in thin film coatings for commercial applications. (Image: unisa.edu.au)

As fluids in the human eye provide markers for an individual’s health, the authors say their goal now is to create electrical sensors on a contact lens from their polymers to sense in real time a person’s well-being.

Prof. Evans said he and his team plan to develop complementary technologies to read the data transmitted by the conducting polymers.

“What is really significant is that the materials we are developing are not only safe but also have the potential for a range of personalised health monitoring applications that could make life simpler for people struggling with chronic health problems.”

“The fabrication of this conductively coated hydrogel has implications for the future of wearable electronic devices.”

In this video, Google unboxes its smart contact lens.