Crows and goth parrots use tools to get food

Crows with tiny cameras attached were videoed using tools to get at food in one study, while in another study Goth Parrots (Greater Vasa parrots) were seen sharing and grinding with tools. Very few animals apart from humans use tools, fewer make them, and this parrot is the only non-human we know of that uses tools for grinding.

The complexity of tool use is commonly seen as an indication of the general intelligence of a species. While humans are a long way in front regarding tool use, the next position is shared by chimpanzees and New Caledonian Crows, according to Oxford University’s Behavioural Ecology Research Group.

The discovery that a number of non-human animals, including some birds, are competent tool users has important implications for our understanding of a range of topics, including animal intelligence, the emergence of culture, and our supposed superiority. 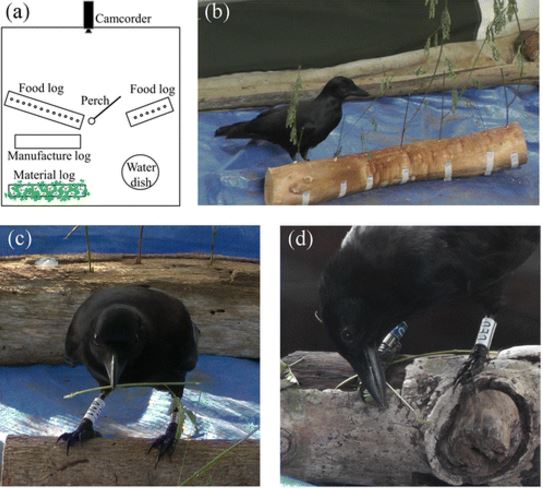 Experimental set-up for investigating hooked stick tool making in New Caledonian crows. (a) Top view of set-up in an experimental chamber (approximately 3 by 3 m), as used in Experiment 1. In Experiment 2, only one ‘food log’ with a single extraction hole was presented. New Caledonian crow (b) examining seven plant stems of different properties in Experiment 2 (presented in randomised order on the ‘material log’), and (c) and (d) using a basic tool. (Image: BMC Biology)

The two scientists developed super-tiny video spy cameras which were attached to the tropical crows. The aim was to see how they foraged.

They were amazed to see two instances of hooked stick tool-making in the video, the first time such a recording was ever made. One bird spent about a minute actually making the tool, and then stuck it into tree crevices and piles of leaves on the ground.

“While fieldworkers had previously obtained brief glimpses of hooked stick tool manufacture, the only video footage to date came from baited feeding sites, where tool raw materials and probing tasks had been provided to crows by scientists. We were keen to get close-up video of birds making these tools under completely natural conditions.” The New Caledonian crow (Corvus moneduloides) is an entirely black, medium-sized member of the family Corvidae. It is commonly nicknamed ‘qua-qua’ in New Caledonia due to its distinctive call. This species is also able to solve several sophisticated cognitive test, which suggest it is highly intelligent. (Image: Wikipedia)

“New Caledonian crows are notoriously difficult to observe, not just because of the challenging terrain of their tropical habitats, but also because they can be quite sensitive to disturbance. By documenting their fascinating behaviour with this new camera technology, we obtained valuable insights into the importance of tools in their daily search for food.”

The spy cameras, which weighed about the same as a ₤1 coin, with an integrated radio beacon were attached to the birds’ tail feathers. After a few days, the devices were collected from the birds when they were back at their nests.

“These cameras store video footage on a micro-SD card, using technology similar to that found in people’s smart phones. This produced video recordings of stunning quality.”

A total of 19 tiny cameras were fitted onto the crows at the dry forest study site. After sifting through several hundreds of hours of video footage, they gleefully observed two instances of hooked stick-tool making.

“The behaviour is easy to miss – the first time I watched the footage, I didn’t see anything particularly interesting. Only when I went through it again frame-by-frame, I discovered this fascinating behaviour. Not once, but twice!”

“In one scene, a crow drops its tool, and then recovers it from the ground shortly afterwards, suggesting they value their tools and don’t simply discard them after a single use.”

“Crows really hate losing their tools, and will use all sorts of tricks to keep them safe. We even observed them storing tools temporarily in tree holes, the same way a human would put a treasured pen into a pen holder.”

New Caledonian crows are endemic to the islands of New Caledonia in the southwest Pacific Ocean. The tropical-forest dweller eats a wide range of food including eggs, several types of invertebrates, small mammals, snails, seeds and nuts.

Some zoologists say their tool-making abilities rival those of primates.

A team of psychologists from the University of St. Andrews and the University of York say they have discovered previously unknown skills in Greater Varsa parrots, also known as Goth parrots due to their black and grey somber plumage.

They were seen sharing and grinding with tools, which they claim is a first for any non-human animal. The greater vasa parrot (Coracopsis vasa) can be found throughout Madagascar and the Comoros. During brooding and chick-rearing, the female sheds her head feathers and develops bright orange skin colouration. She also sings complex songs from perches near to the nest – the aim being to attract the male to come and regurgitate food. (Image: Wikipedia)

The team studied ten captive birds and observed them adopting a novel tool-using technique to get calcium from seashells. They were also observed actively sharing the tools with one another.

The parrots ground calcium powder from the shells using pebbles or date pits. The tools were also used to break off small bits of shell to ingest.

Not only is this the first time this has been seen in Goth parrots, it is also the first evidence of a non-human animal using a tool for grinding. The researchers said there are very few reports of non-human animals sharing tools directly.

The parrots were observed and filmed from March to October 2015. Their interactions with cockle shells on the aviary floor were carefully documented. In this image, you can see the parrot using a pebble to grind the inside of a shell. (Image: YouTube)

Many species of birds seek out shells – they are an important source of calcium.

Dr. Amanda Seed, a Lecturer at the University of St Andrews’ School of Psychology and Neuroscience, said:

“These parrots are remarkable for many reasons: the females are the dominant sex, they cooperate to raise their young, and now we have found that, in captivity at least, they use pebbles as grinding tools. We hope to be able to work further with this fascinating species to find out more about their behaviour and cognition.”

Half of all the birds were documented using tools, placing either date pits or pebbles inside shells to grind out calcium powder, as well as using them as a wedge to break off bits of shell.

The birds were more interested in shells just before the breeding season, from March to mid-April, probably because extra calcium is vital for successful egg-laying.

Dr. Seed and colleagues were surprised to see that the male parrots showed more interest in the shells than the females.

They later found, however, that the males were frequently engaged in regurgitative feeding of females before mating with them – so, the females appear to eventually get the calcium supplementation.

Lead author, Megan Lambert, a PhD student in the University of York’s Department of Psychology, said:

“The use of tools by nonhuman animals remains an exceedingly rare phenomenon. These observations provide new insights into the tool-using capabilities of parrots and give rise to further questions as to why this species uses tools.”

“Tool use could reflect an innate predisposition in the parrots, or it could be the result of individual trial and error learning or some form of social learning. Whether these birds also use tools in the wild remains to be explored, but ultimately these observations highlight the Greater Vasa parrot as a species of interest for further studies of physical cognition.”