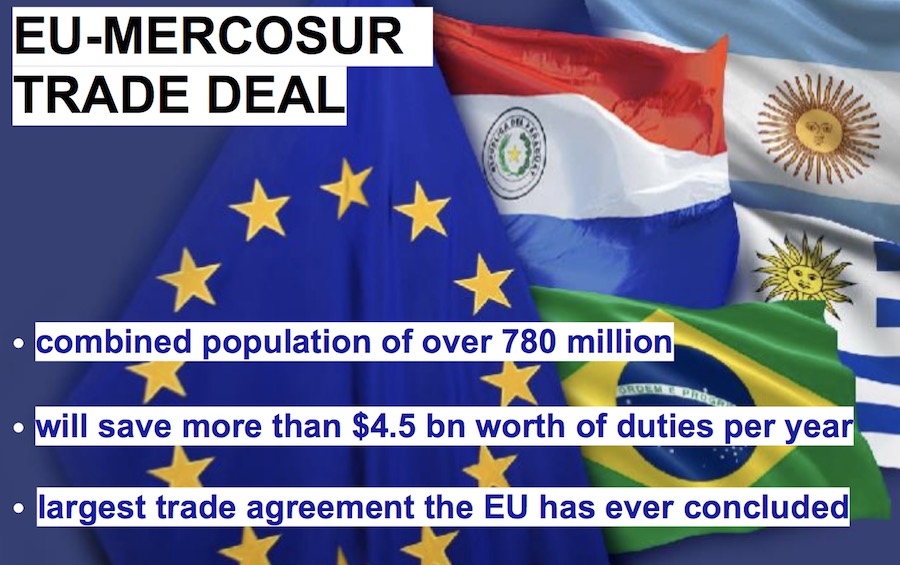 Mercosur and the European Union have secured a massive trade deal after over two decades of negotiations.

The deal creates a trade bloc of 780 million people with a total economic output of €19 trillion.

The EU is currently Mercosur’s biggest trade and investment partner and its second largest for trade in goods.

The Mercosur bloc is a market for 60,500 EU companies and a major destination for EU investments, with €381 billion in investment stocks in 2017

A European Union news release said: “The new trade framework — part of a wider Association Agreement between the two regions — will consolidate a strategic political and economic partnership and create significant opportunities for sustainable growth on both sides,”

According to EU Commission chief Jean-Claude Juncker, this was the EU’s biggest deal to date.

What will the deal do?

With @mauriciomacri, #EU and #Mercosur leaders we stand as proud co-owners of the #trade agreement between the 🇪🇺 and Mercosur. United, we delivered for our people and our businesses – 20 years to the day after negotiations began. Un dia historico. https://t.co/ntPhejUMsE pic.twitter.com/VVgwsj1LQX

“This is a historical moment,” said Jean-Claude Juncker, president of the European Commission, the EU’s executive arm. “In the midst of international trade tensions, we are sending today a strong signal with our Mercosur partners that we stand for rules-based trade.”

🇪🇺🇦🇷🇧🇷🇵🇾🇺🇾 History in the making: We have an agreement for an #EUtrade deal with Mercosur trade area comprising Argentina, Brazil, Paraguay & Uruguay!🎉
Read the highlights of the political agreement: https://t.co/cyEVHPAVV9

EU Commissioner for Trade Cecilia Malmström said: “Today’s agreement brings Europe and South America closer together in a spirit of cooperation and openness. Once this deal is in place, it will create a market of 780 million people, providing enormous opportunities for EU businesses and workers in countries with whom we have strong historical links and whose markets have been relatively closed up to now.

“The agreement will save European companies over €4 billion in duties at the border – four times as much as our deal with Japan – whilst giving them a head start against competitors from elsewhere in the world. It also sets high standards and establishes a strong framework to jointly address issues like the environment and labour rights, as well as reinforcing sustainable development commitments we have already made, for example under the Paris Agreement.

“Over the past few years the EU has consolidated its position as the global leader in open and sustainable trade. Agreements with 15 countries have entered into force since 2014, notably with Canada and Japan. This agreement adds four more countries to our impressive roster of trade allies.”

Brazilian President Jair Bolsonaro hailed the deal as “historic” and “one of the most important trade deals of all time”.