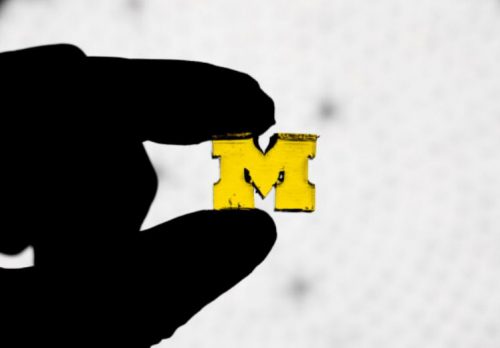 Much faster 3D printing is achievable with light, say researchers. It makes adding plastic filaments layer by layer seem extremely slow by comparison. In a new approach to 3D printing, the device lifts complex shapes from a vat of liquid at up to one-hundred times faster than current processes.

3D printing could transform how we perform relatively small manufacturing jobs. In other words, producing batches of no more than 10,000 identical items, because it would mean that we could make items without the need for a mold that cost $10,000 or more.

However, conventional 3D printing hasn’t filled that gap. It won’t if we continue with the typical production timescales of one to two weeks. In other words, current 3D printing techniques are too slow.

Tim Scott, who co-led the development of the faster 3D printing approach with Mark Burns, said:

“Using conventional approaches, that’s not really attainable unless you have hundreds of machines.”

In this new method, the researchers used two lights to control where the resin hardened and stayed fluid. This enabled them to solidify the resin in much more sophisticated patterns.

They could make a 3D bas-relief in one single go rather than a series of 2D cross-sections or 1D lines.

Their faster 3D printing demonstrations included a toy boat, a block M (see image above), and a lattice.

“It’s one of the first true 3D printers ever made,” said Prof. Burns.

The true 3D approach, however, is no mere stunt. The researchers had to overcome the constraints of earlier vat-printing efforts. Namely, the resin had a tendency to solidify on the window that the light shone through. This subsequently brought the printing job to a halt the moment it started.

In a large region there is no solidification

The authors created a relatively large region where there was no solidification. They could then use thicker resins, potentially with additives to strengthen the product. They would then be able to produce more durable items.

This method also bests filament 3D printing’s structural integrity. These objects tend to have weak points where the layers interface.

In a press release, University of Michigan wrote the following regarding the resin:

“But because this gap is only about as thick as a piece of transparent tape, the resin must be very runny to flow fast enough into the tiny gap between the newly solidified object and the window as the part is pulled up.”

“This has limited vat printing to small, customized products that will be treated relatively gently, such as dental devices and shoe insoles.”

The researchers were able to halt solidification by replacing the oxygen with a second light. They subsequently produced a significantly larger, millimeters thick gap between the window and the object.

The larger gap allowed the resin to flow at a much faster speed – thousands of times faster.

The key to their success was the resin’s chemistry. There is only one reaction in conventional systems. Wherever the light shines, a photoactivator hardens the resin.

With conventional vat-printing techniques, it is only possible to control solidification in a 2D plane. With this faster 3D printing approach, the researchers can pattern two types of light to harden the resin at virtually any 3D location near the illumination window.

What is 3D printing