Employees who choose to leave their employer, may: 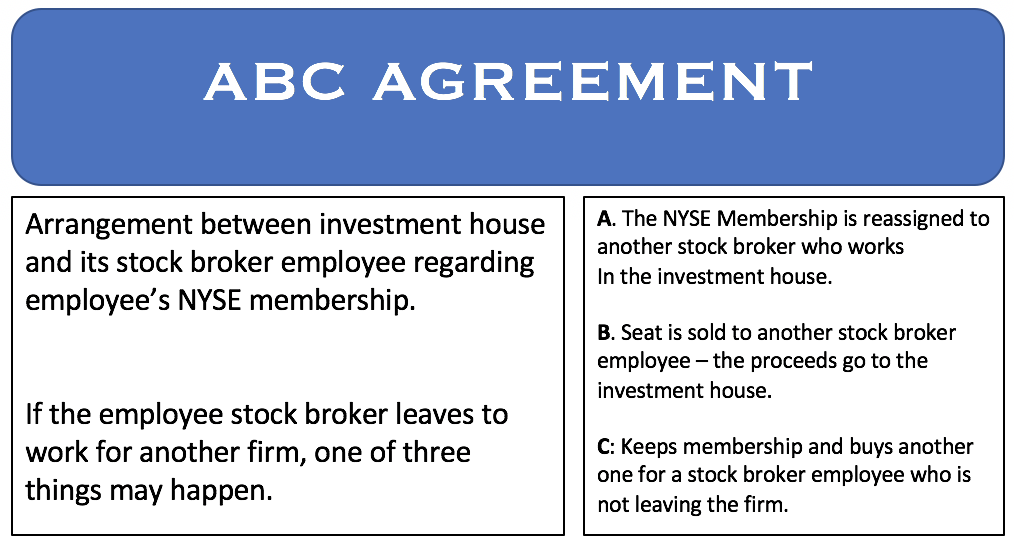 We call it an ABC agreement because there are three options to choose from when an employee leaves. Firms that work in other stock markets across the world have similar agreements.

Reason for the ABC agreement

An investment house buying an employee’s NYSE membership is a major perk.

ABC agreements exist because NYSE members represent their employers. The employers purchase seats for broker employees. However, the NYSE recognizes them as an independent.

The ABC agreement protects the employer in case the employee leaves to work elsewhere. The stock market is full of rival firms. For the agreement to be valid, it must have the consent of the NYSE.

Regarding the ABC agreement, InvestingAnswers.com makes the following comment:

“To this end, an ABC agreement is a protective measure for the employing investment house which ensures that, should a broker decide to leave, he will not adversely affect his former employer’s reputation on the exchange.”

Often referred to as an ABC agreement, the Acceptable Behaviour Contract is a formal written agreement. Typically, one individual and a guardian or the parents sign the contract.

The arrangement may also apply to a contract between a person and a registered landlord, school, housing department, or local police.