What is advertainment? Definition and meaning

Advertainment is a term used to describe entertainment that incorporates elements of advertising. It is the practice of integrating brand communications within the content of entertainment products (movies, songs, TV shows, etc.)

The word advertainment is a portmanteau of advertising and entertainment.

Vehicles of entertainment that can be used to advertise a message include: TV and movies, online media, radio shows, songs, music videos, video games, plays, and even books.

Advertainment has become a popular method for brands to promote their products amid increasing advertising clutter and high advertising costs.

The three main types of advertainment 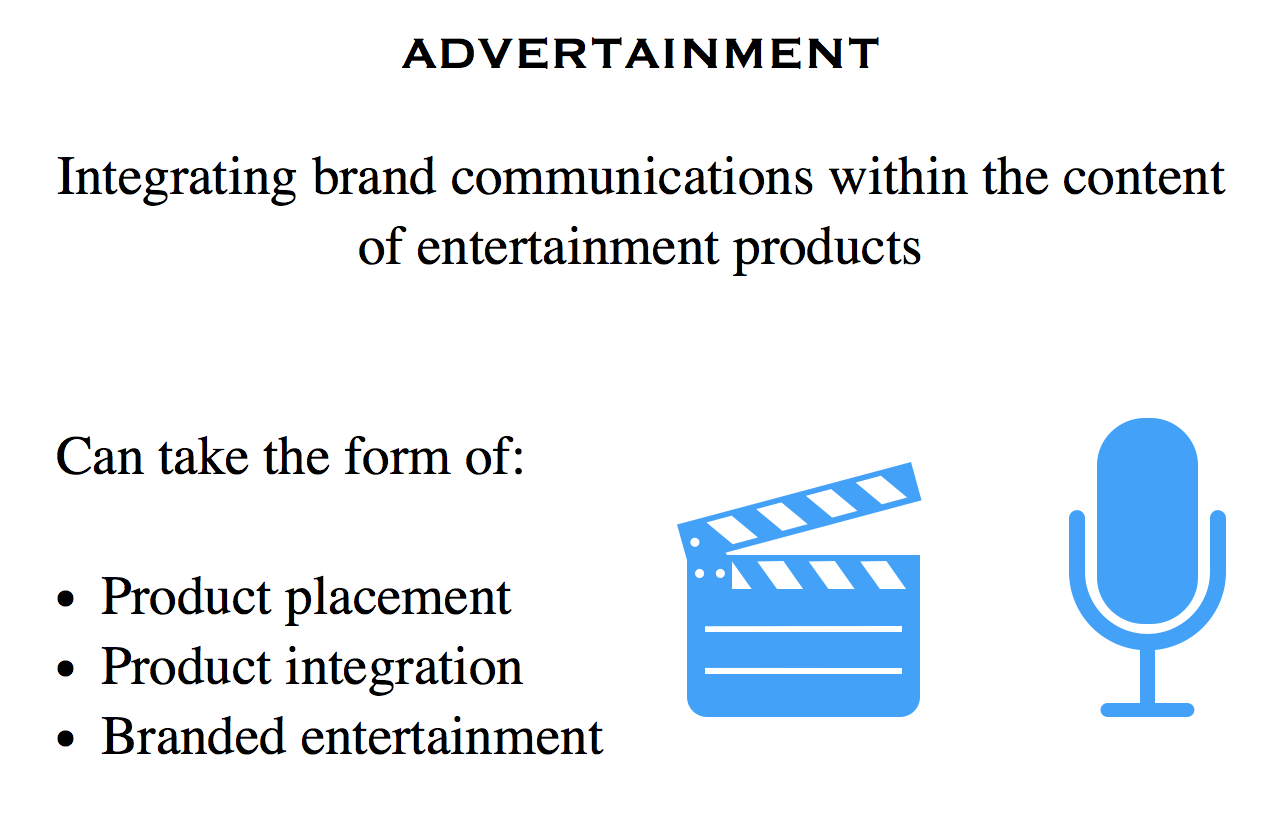 The use of entertainment to promote products dates back to early motion pictures – companies would pay to have their products exposed on-screen. A notable example is the prominent placement of Hershey’s candy in the 1927 American silent war film “Wings” (1927) – the movie won the first Academy Award for Best Picture at the first annual Academy of Motion Picture Arts and Sciences award ceremony in 1929.

In the 1930s, companies began investing in the production of radio programs to target their audience. Detergent companies, such as Procter & Gamble, developed radio programs to promote their brands and even integrated them into the scripts. In the 1950s, marketers began to sponsor television shows, such as ”The Colgate Comedy Hour” and ”Texaco Star Theater”. However, this level of show sponsorship began to become less popular as companies saw more value in spreading their ad budget across various shows rather than focus on just one.

It wasn’t until the 1980s that companies saw the massive potential of a really well placed product placement in a movie. The 1982 movie E.T. featured the use of Reese’s Pieces in a pivotal moment of the movie. The placement was a massive success for the brand, raising awareness and boosting sales by 65%.

The popularity of advertainment has increased in recent years as consumers have more ways of avoiding traditional commercials.

A famous example of successful advertainment occurred in 2012 when “Red Bull Stratos” shattered live stream records with over 8 million viewers watching the highest-ever jump from a manned balloon.