Arbitration is a type of dispute resolution in which an independent third party arbitrates – like a referee. The term refers to either a private or judicial dispute. In an arbitration hearing, an arbitrator or a tribunal mediate the dispute. The parties in dispute hand over the power to decide the dispute.

Therefore, unlike a referee in a sports match, the arbitrator makes a final determination. The arbitrator’s decision determines the outcome of the dispute.

The role of the arbitrator is more similar to that of a judge than a referee. However, the process is less formal than the proceedings in court. In most cases, arbitrators are experts in their own right.

Arbitration is often a better alternative to legislation (the courts) for many reasons. First, the arbitrator is usually an expert. Second, the arbitrator can often make decisions that a judge cannot. And finally, it is much cheaper and faster. Furthermore, the organizers can tailor the procedure to the needs of the disputing parties.

As opposed to mediation, conciliation, or negotiation, which are non-binding, arbitration is binding. In fact, it is usually just as final as court action. People often use this type of hearing as an alternative to court action.

Arbitrations come in many sizes

Put simply; arbitration is the referral of a dispute to a third party. It can either be just one third party or a group of arbitrators.

If it is a group, it usually consists of 3, 5, 7, etc. members. The total number of arbitrators must be an odd number. Otherwise, there is a risk of the vote being a tie.

For the hearing to occur, both parties must agree to it. If a contract has a risk of future disputes, both parties insert a clause in the relevant contract.

The arbitrator reaches a decision either by following hearings at an agreed location or on a documents-only basis.

According to London-based Chartered Institute of Arbitrators:

“Arbitration is a non-judicial process for the settlement of disputes where an independent third party – an arbitrator – makes a decision that is binding.”

Arbitration may consist of just one arbitrator and the two disputing parties. However, some are much larger and may comprise several arbitrators and counsels representing either party.

The principles of arbitration

According to Mediate.com, the general principles of arbitration are:

The following people appoint the arbitrators:

Unlike mediation, neither party has permission to withdraw unilaterally from the hearing. 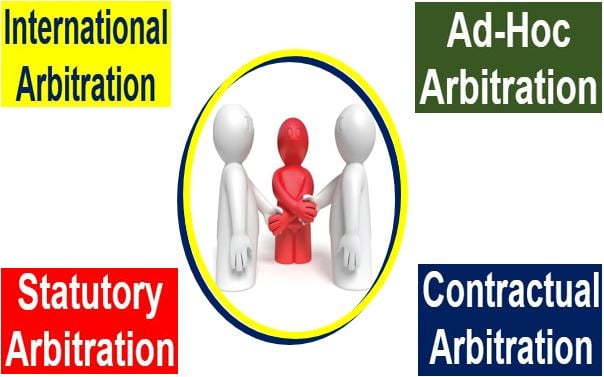 The Oregon Judicial Department makes the following comments, including some advantages to using an arbitrator rather than a judge:

“Arbitration is a fast way to get a decision when you are in a dispute. Arbitration is more flexible and less formal than court. Usually, an arbitration can be scheduled faster than a trial. Sometimes, if the parties want, arbitrators can decide things that judges are not allowed to decide.”

“Arbitration is like a trial but less formal. In arbitration, two sides present their evidence to an arbitrator. The arbitrator decides who wins and who loses. An arbitrator does the job that a judge or jury would normally do in court.”

The Canadian Department of Justice lists the following arbitration features:

Which cases go to arbitration?

There are many types of cases that an arbitrator hears rather than a judge in a court. Under Oregon State law, for example, there are two kinds: 1. Some civil actions involving claims for money or damages, 2. Some family law matters.

In a civil case, one party sues another, usually for money damages. Parties may be individuals or businesses. The case may be about injuries and costs from an accident or a disagreement regarding a contract.

In Oregon, if you file a civil case for less than $50,000, you have to use an arbitrator. Many US states have similar laws.

Oregon state law says an arbitrator must hear any dispute regarding domestic relations or family law where the parties only disagree on what to do with their debts and property.

Sometimes parties might agree to arbitrate in cases of child or spousal support.

Criminal cases always go to the courts – they are never heard by an arbitrator.

Arbitrators in the United States earn between $50 and $125 per hour for their time. Typically, the parties need to send a deposit to the arbitrator when they select one. They have to pay the whole fee before the hearing begins.

Arbitrators cannot usually charge more than $500. However, in particularly complicated cases the fee may be higher.

Arbitration is probably the most popular dispute resolution process across the globe. It utilizes an adversarial approach in which a neutral party has to to render a decision. This adversarial style makes arbitration similar to the courts.

Sometimes the disputing parties are from different nations, without recourse to the courts of a particular country. Nearly all international disputes are commercial.

According to the Australian Centre for International Commercial Arbitration (ACICA), the resulting award in international commercial arbitration cases is final and binding on the parties. Furthermore, it is readily enforceable across the world.

In our current global economy, the ability to settle international disputes is a vital part of doing business effectively.

ACICA writes on its websites:

“International arbitration is no longer just an alternative to litigation but an important tool in safeguarding commercial relationships and managing risks.”

“The several advantages of international arbitration have made it the preferred method for resolving cross-border disputes in the world today.”

The United States and United Kingdom were pioneers in the use of arbitration to resolve disputes. Historians say it was first used in the Jay Treaty of 1795. Historians say the Treaty averted a war between the US and Britain.

It also played a major role in the Alabama Claims case of 1872. In that case, the US Government made a series of demands from the UK.

The 1899 Hague Peace Conference saw the world’s major powers agree to a system of arbitration. In that year they created the Permanent Court of Arbitration.

Arbitrators heard the Newfoundland fisheries dispute between the US and UK in 1910. In 1911, the US, UK, and France signed arbitration treaties.

The US and UK resolved a case over Venezuela in 1985 through arbitration without firing one shot.

Both the US and UK soon saw the value of arbitration. Both countries agreed that arbitration rapidly resolved disputes and prevented possible future conflicts.

According to the Online Etymology Dictionary, the term first emerged in the English language in Britain in the late 14th century. In the 14th century, it meant ‘absolute decision’. It came from Old French Arbitracion, which originated from Latin Arbitrationem (nominative: arbitratio), meaning ‘judgment, will’.

Arbitrators, along with judges, magistrates, bailiffs, and lawyers are ‘officers of the court.’