What is a bot? Definition and examples

A bot is a piece of software that runs scripts, i.e., automated tasks online. We also refer to it as a web robot, robot, or Internet bot. Most bots perform both structurally repetitive and simple tasks. They function at a significantly faster rate than any human could.

Web crawlers, i.e., scripts that automatically retrieve, analyze, and archive data online from web servers are bots. We often refer to them as web spiders. Bots represent more than fifty percent of all online traffic. 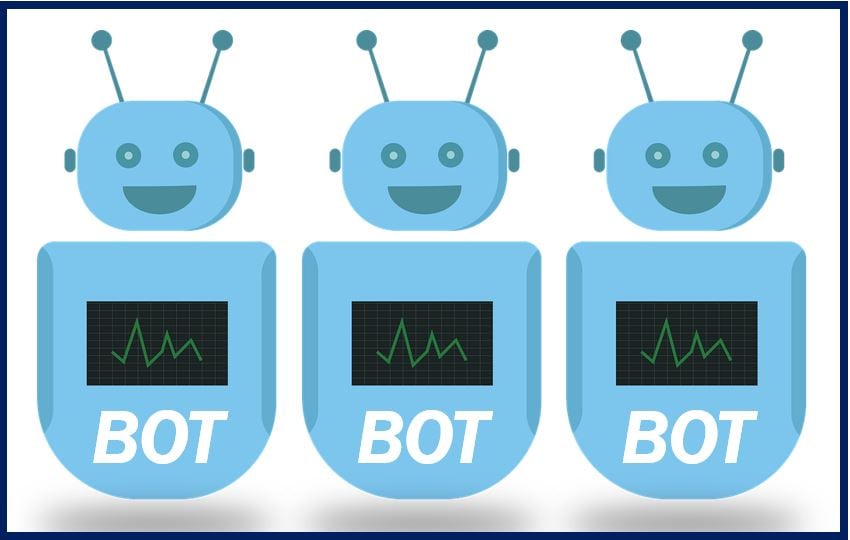 Cloudfare.com says the following about the web robots:

“A bot is a software application that is programmed to do certain tasks. Bots are automated, which means they run according to their instructions without a human user needing to start them up. Bots often imitate or replace a human user’s behavior.”

A bot can be good or bad

We refer to useful bots as good ones. They include, for example, search engine web crawlers that index content for online users who carry out searches.

Customer service bots are also useful because they help customers, prospects, and other consumers sort out problems or find answers to questions. A prospect is somebody that a company believes could well turn into a paying customer.

Some bots are software applications that programmers have created to break into people’s accounts, i.e., they are online automated hacking robots. Others search the web for contact data that can be used for sending spam.

Spam or online junk mail refers to mass online mailings that are sent to thousands and even millions of individuals simultaneously. They are unsolicited messages, i.e., the receivers never asked for them.

There is a type of good online software that chats with people. We call them chatbots, talkbots, or chatterbots. They are algorithms that programmers have created to simulate a human in a conversation. Virtual assistant software programs today, such as Apple’s Siri and Google Assistant, have chatbot technology.

Wikipedia says the following regarding chatbots:

“Some chatbots use sophisticated natural language processing systems, but many simpler ones scan for keywords within the input, then pull a reply with the most matching keywords, or the most similar wording pattern, from a database.”

This software application can take the place of a player in a video game. The software has AI. AI stands for artificial intelligence; i.e., software technology that makes smart devices such as computers or robots think and behave like us (human beings).

In an article published by IT Briefcase, Duncan Argent wrote:

“In most games, bots are used in development and demos, while players are still learning the ropes, and they are also used in more advanced levels within multiplayer games to simulate other players – a useful function when all of your gamer friends are offline!”

Socialbots function in social media websites. Programmers created them to give your website visibility and drive engagement. Companies use them as part of their digital marketing campaigns. Unlike crawlers and other types of bots, socialbots spread by convincing us that they are real people. 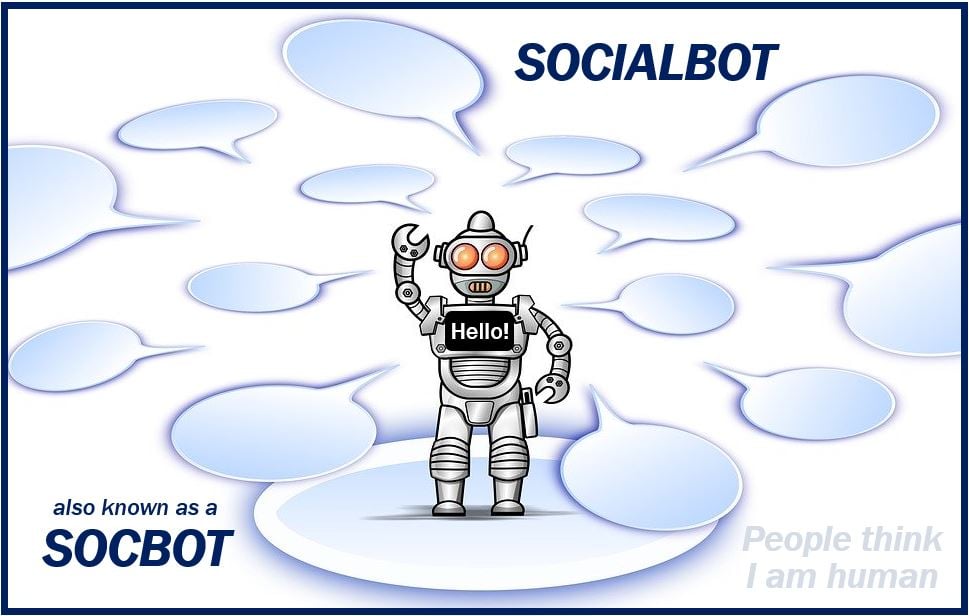 They are neither good nor malicious bots. Many people believe that they are unethical. The whole point of a social media platform, they say, is to connect to other human beings, not software programs.

Socialbots are more common in Twitter than Facebook and other social networking websites. It is relatively easier to create a socialbot that appears human in an environment with very short messages (microblogs) rather than long ones.

TechTarget.com says the following about socialbots:

“The capacity of socialbots to wield influence could enable them to sway voters, mount political attacks or overwhelm dissent, among many other possibilities.”

“Socialbots can also pose a security risk. In 2011, for example, a socialbot network stole gigabytes of user data from Facebook.”