What are ethics? Definition and meaning

Ethics refers to the moral principles that govern how humans conduct themselves at work and outside. In the world of business, how we perceive and respond to ethical issues affects how we operate in the market. This includes how we deal with our employees, customers, regulations, competitors, and others.

Business ethics, also known as corporate ethics, refers specifically to companies and professions. Specifically, it refers to moral or ethical problems that arise in a commercial or professional environment. It applies to every aspect of business conduct. In fact, it is relevant to how individuals and entire organizations behave.

Without ethical behaviors, the current environment where companies in free-market economies operate would not exist. It is thanks to the moral principles of most entrepreneurs that the North American, European, Japanese and Australasian economies can boast the world’s highest standards of living. 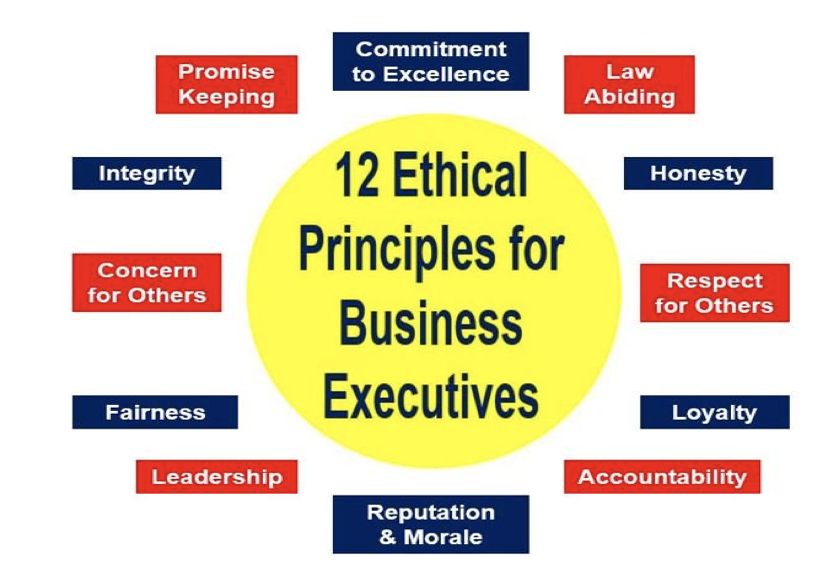 Whether you work in a small company or multinational corporation, following ethical principles matters. The most recent reminder of the importance of ethical matters came with the Wall Street collapse – once highly-esteemed banks and other financial institutions made headlines for their questionable behavior and bad choices. (Image Data Source: southuniversity.edu)

At its simplest, ethics – a moral philosophy – is concerned with what is good for individual people and society as a whole.

In business, medicine, agriculture, human welfare, animal welfare, and every sector of our economy and society, ethics covers the following dilemmas:

Do we write ethics ‘is’ or ‘are’ – is it a plural or singular word? It depends on whether you are using the term as a field of study or an individual’s moral standards. See the examples below:

– Singular: “Ethics is a field in which many philosophers disagree.” When it refers to the field of study the word is singular.

– Plural: “Strong ethics are required for a business executive to be trustworthy.” When it refers to the moral standards of a person, it is a plural word. The Code Values for Business Ethics is a guide of principles designed to help professionals and executives conduct business with integrity and honestly. This image contains the most common values, however, they may vary from company to company. Businesses count on their directors and managers to set a standard of ethical conduct for other employees to follow. (Image Data: quotesgram.com)

Philosophers have been debating ethical issues for literally thousands of years. Today, they tend to divide the theories into four areas:

– Meta-Ethics: this examines the nature of moral judgment. Philosophers look at the meaning and origins of ethical principles. Rather than addressing such questions as “What should I do?”, this branch addresses questions such as “How can we tell what is good from what is bad?” or “What is goodness?” The aim is to seek to understand the nature of ethical properties and evaluations.

– Normative Ethics: this is the study of ethical actions; it looks at the content of moral judgments and the criteria for what is right & wrong. This branch examines the standards for the wrongness or rightness of actions. Philosophers disagree about what precisely gives a rule, disposition or action its ethical force. Normative economics looks at how things ought to or should be or should have been rather than how things are/were.

– Descriptive Ethics: looks at what motivates pro-social behavior, how people reason about ethical issues, what we believe to have overriding importance, and how societies regulate behavior, such as punishing individuals for certain actions. Philosophers say empathy helps motivate pro-social behavior in humans – such as donating to charity. Our beliefs about what has overriding importance is largely based on the culture we live and were brought up in.

– Applied Ethics: deals with controversial topics like capital punishment, animal rights, abortion and war. It is the attempts to use philosophical methods to determine what the morally correct courses of action are in a number of fields of everyday life. Pope Benedict XVI (Joseph Aloisius Ratzinger), who served as Pope of the Catholic Church from 2005 to 2013, once said: “To me, it really seems visible today that ethics is not something exterior to the economy, which, as technical matter, could function on its own; rather, ethics is an interior principle of the economy itself, which cannot function if it does not take account of the human values of solidarity and reciprocal responsibility.” (Image: integratedcatholiclife.org)

What are business ethics?

Ethics definition in business – This is a form of applied or professional ethics that examines ethical and moral principles and problems that arise in a business environment.

It refers to contemporary standards or sets of values that influence the behavior and actions of an individual in a commercial enterprise.

Business ethics is not only about having a positive effect within your local environment, but also further afield – even globally.

Corporate ethics has both normative and descriptive dimensions. As a career specialization and a corporate practice the field is mainly normative. Scholars trying to understand business behavior utilize descriptive methods. Bhimrao Ramji Ambedkar (1891-1956), popularly known as Babasaheb, an Indian economist, jurist, politician and social reformer who inspired the Dalit Buddhist Movement, once said: “History shows that where ethics and economics come in conflict, victory is always with economics. Vested interests have never been known to have willingly divested themselves unless there was sufficient force to compel them.” (Image: Wikipedia)

The list of principles below incorporate the characteristics and values that the majority of people associate with ethical behavior:

– Honesty: an ethical director, manager or executive must be honest and truthful in all his or her dealings. They should never purposefully mislead or deceive other people by overstatements, partial truths, misrepresentations, selective omissions, etc.

– Integrity: ethical executives demonstrate the courage of their convictions and demonstrates personal integrity by doing what they believe to be the right thing, regardless of pressures to do otherwise. They are honorable, principled and upright, and will defend their beliefs. Principle is never sacrificed for expediency, they are never unscrupulous or hypocritical.

– Trustworthy & a Promise-Keeper: they are worthy of trust. Ethical executives are forthcoming and candid in explaining things with the relevant information and correcting misstatements. They try as hard as they can to keep to the letter and spirit of their commitments and promises.

– Loyalty: they are loyal to individuals and institutions by support and devotion to duty and friendship in adversity. They do not exploit a situation by disclosing information they learned in confidence. They are extremely careful not to be affected by conflicts of interest. They are extremely loyal to their companies and work colleagues.

– Fairness: they are just and fair in all their dealings. They never exercise power arbitrarily. They do not use indecent means to gain an advantage or exploit other people’s mistakes for their own benefit. They are committed to justice and the equal treatment of people. They are willing to admit they are wrong.

– Compassion and Empathy: ethical executives are compassionate, empathetic, benevolent, kind and caring. They strive to achieve their business goals and targets in a manner that causes the least harm and the greatest positive good.

– Respect: they demonstrate total respect for the human rights, dignity, autonomy, interests and privacy of everybody who is affected by their decisions. They are polite and treat everybody with equal respect and dignity regardless of nationality, national origin, race or sex.

– Law Abiding: they respect and abide by the laws, regulations and rules of the marketplace.

– Committed to Excellence: they aim to perform their duties to the best of their abilities. They make sure they are prepared and well-informed, and constantly try to improve in all areas of responsibility.

– Leadership: they aim to be positive ethical role models. They are aware of the responsibilities and opportunities of their position of leadership – they aim to create an environment in which ethical decision-making and principled reasoning are highly prized.

– Reputation & Morale: they aim to build and maintain the company’s good reputation as well as the morale of its workforce. They avoid becoming involved in conduct that may undermine respect and will take all actions necessary to prevent the inappropriate conduct of others.

– Accountability: they accept personal accountability for the ethical quality of their decisions.

Video – What is business ethics?

This video, by the Markkula Center for Applied Ethics at Santa Clara University, explains what business ethics is using simple and easy-to-understand terms.