What is failure rate? Definition and examples

Systems’ or components’ failure rates vary during their lifetime. Typically, rates decline as people detect and fix problems. However, they eventually rise due to deterioration.

Between the initial and final phases, failure rates are usually steady. 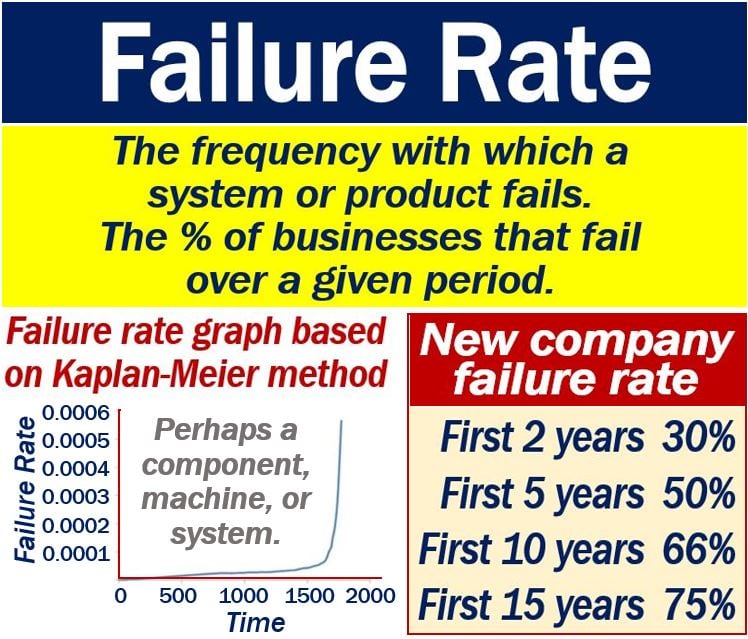 Failure rates of automobiles, for example, are much greater during their tenth year than their first or second year.

You don’t expect to replace a new car’s exhaust pipe, for example, in its first or second year. On the other hand, you expect failures if your car is ten years old.

In practice, most people report the mean time between failures (MTBF, 1/λ) rather than the failure rate. This is especially the case for high-quality components or systems.

Regarding the mean time between failures, Wikipedia writes:

“This is valid and useful if the failure rate may be assumed constant – often used for complex units/systems, electronics – and is a general agreement in some reliability standards (Military and Aerospace).”

Over the past fifty years, there have been many studies on new or small companies’ chances of surviving or failing. Small business failure rates refer to the percentage of businesses that fail over specific periods.

According to a 1996 article by John Watson and Jim Everett, studies had shown an inverse relationship between business size and failure risk.

The authors, from the University of Western Australia, however, stressed that reported failure rates depended heavily on the study authors’ definition of failure.

According to the Small Business Administration (SBA), thirty percent of new companies do not last more than two years. In other words, the failure rate for new companies is 30% at 24 months of being open.

The SBA adds that failure rates continue rising over time. For example, during the first five years, fifty percent of new companies fail. Sixty-six percent fail within a decade.

Most physicians would not recommend spinal fusion to family members because it has a failure rate of 75%.