Flexible working is a general term for work patterns that vary from the traditional nine-to-five, Monday-to-Friday office job. The patterns typically vary in three ways: location of work, number of hours, and start and finish times. 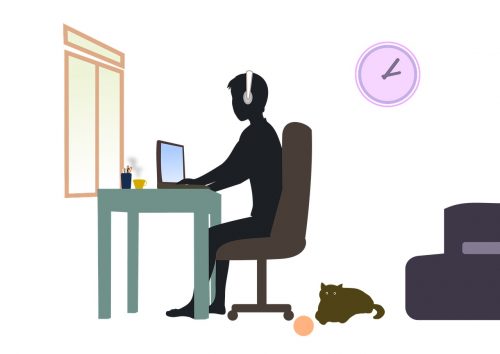 Here are some example definitions of flexible working:

The amount and type of flexibility can vary widely. At one end of the range are firms that only allow flexing of start and finish times around a core of working hours. During core hours, all staff must be present in the workplace.

At the other end of the range is the “work from anywhere” (#WFA) movement. Here, the emphasis is on productivity and deadlines rather than hours logged.

A typical scheme will likely include some or all of the following features:

Working from home (WFH) has been the norm for some time in some sectors. Professional architects are such an example. A typical arrangement for a practice comprising a handful of employees and a couple freelancers is to work from home with a face-to-face meeting once a week.

As an industry, information technology (IT) also lends itself to flexible working. It is common for IT job sites to contain advertisements for telecommuting programmer positions.

With a laptop and Internet link, many IT workers can carry out and deliver their work from literally anywhere at any time. The ability to flex hours and locations helps them to strike the right work-life balance.

Employers are increasingly recognizing that they are more likely to attract high quality staff if they don’t tie them to a particular location or pattern of working.

According to a 2019 survey, around 80 percent of jobseekers in the United States would turn down jobs that did not include flexible working. Of the workers in the survey, more than half said that being able to choose their work location was more important than working for prestigious firms.

The survey also found that more than 80 percent of firms in the US had either introduced flexible working policies or were planning to do so.

Advances in technology have transformed the world of work. Often, the change is gradual and incremental. Occasionally, however, significant transformation can occur in a short space of time, such as due to catastrophic events. Two crises that have caused many firms to adopt flexible working are the 2011 Japan tsunami and the Covid-19 pandemic.

The earthquake and tsunami that struck Japan in March 2011 devastated many areas in the Pacific basin and also triggered a major accident at a nuclear power station. By then, some Japanese companies were already introducing flexible working. However, the disaster spurred more of them to extend the policies and allow more workers to work from home.

The Covid-19 pandemic has had a similar effect. Some employers widened use of flexible schemes, while others began introducing them.

For example, in 2021, PWC announced a new post-pandemic flexible work deal for their 22,000 people in the United Kingdom. The deal includes more freedom to vary day-to-day patterns and work from home. It also allows individuals to condense their working week so that they can finish early on Fridays in July and August.

The Canadian Centre for Occupational Health and Safety note that several studies have reported the benefits of flexible working. These include:

However, there are also some potential downsides. Working from home can result in feelings of isolation, especially if there is poor communication with colleagues. Some employees may find that they work longer hours and experience increased stress and fatigue.

An effective scheme balances the needs of the business with those of the workforce. A “one size fits all” approach is unlikely to work.

The extent to which work flexibility helps workers improve work-life balance depends on how much control they have over it. Individual needs will vary. Business needs may also fluctuate. Offering a variety of patterns to a large workforce requires dedicated management and good two-way communication.