Gender gap: What does it mean?

The term gender gap refers to the differences between females and males in areas such as pay, achievement, attitude, decision-making, and opportunity. Closing the gap is a major global concern and a priority for the United Nations. 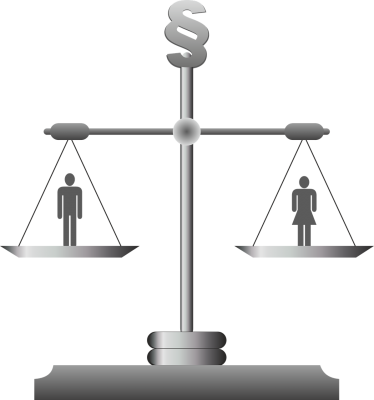 Closing the gender gap is one of the UN’s sustainable development goals. Image pixabay.

The Oxford Advanced Learner’s Dictionary define gender gap as “[t]he difference that separates men and women, in terms of attitudes, opportunities and status.”

The term does not have the same meaning as sex ratio. We use gender gap, for instance, when we talk about differences in contribution or opportunity between females and males. Sex ratio, in contrast, is simply the proportion of females to males in a population.

Closing the gender gap is a priority for the United Nations (UN). The year 2020 marked 75 years since the 1945 UN Charter enshrined gender equality as a “core tenet.”

“Yet,” note the intergovernmental organization, “75 years later, women and girls live in a world of widespread gender inequality.” Females have less access to healthcare and education. They are also under-represented at all levels of decision-making, and “too often lack economic autonomy.”

There has, however, been some progress towards gender equality in the 25 years leading up to 2020. And, while it has been slow and incremental, it shows that “change is possible.”

Gender equality and the empowerment of all females is one of the UN Sustainable Development Goals. Goal number 5 states that:

“Gender equality is not only a fundamental human right, but a necessary foundation for a peaceful, prosperous and sustainable world.”

The UN and other organizations concerned with equality and economics use the World Economic Forum (WEF) Global Gender Gap Index in their research.

In the WEF definition, the gap is “the difference between women and men as reflected in social, political, intellectual, cultural, or economic attainments or attitudes.”

Since the WEF started publishing it in 2006, the Index has consistently included 107 countries. Other countries have joined it over that period. The 2020 edition includes 153 countries.

The 2020 report lists all 153 countries in order of smallest to largest gender gap. Those at the top of the list – that is, with the smallest gap – are:

The following chart shows how much the gender gap – according to the WEF Index – closed between 2006 and 2020. It shows that educational attainment and health and survival have nearly reached gender parity. However, there is still a way to go on political empowerment and economic participation and opportunity. 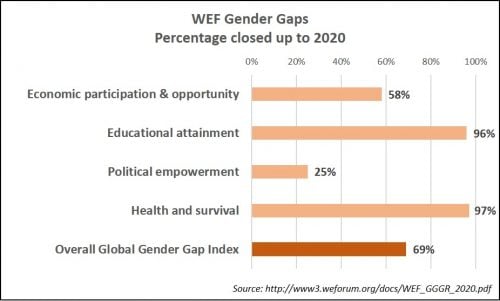 It may take a century to close the gender gap.

The WEF conclude that – at the present rate of change – it will take nearly 100 years to close the gap. In other words, they note:

“None of us will see gender parity in our lifetimes, and nor likely will many of our children.”

In the report preface, Klaus Schwab, WEF founder and executive chairman, writes that this is something “we simply cannot accept in today’s globalized world.”

“Without the equal inclusion of half of the world’s talent,” he adds, “we will not be able to deliver on the promise of the Fourth Industrial Revolution for all of society, grow our economies for greater shared prosperity, or achieve the UN Sustainable Development Goals.”

Differences in pay, or the pay gap – particularly opportunities for higher-paid work – is often a major topic of gender equality studies.

For instance, a 2020 report from the Pew Research Center, in Washington D.C., suggests that most people support the idea of gender equality.

But, of the 34 countries that the think tank surveyed, at least 40% were of the view that “men generally have more opportunities than women in their country when it comes to getting high-paying jobs.”

The report does, however, strike an optimistic note. This is because, in 30 of the 34 countries, most people think that “women will eventually have the same rights as men in their country.”