What is loan capital?

Loan capital is money (capital) needed to run a business which is raised from borrowing rather than shares. Businesses raise loan capital in three main ways: 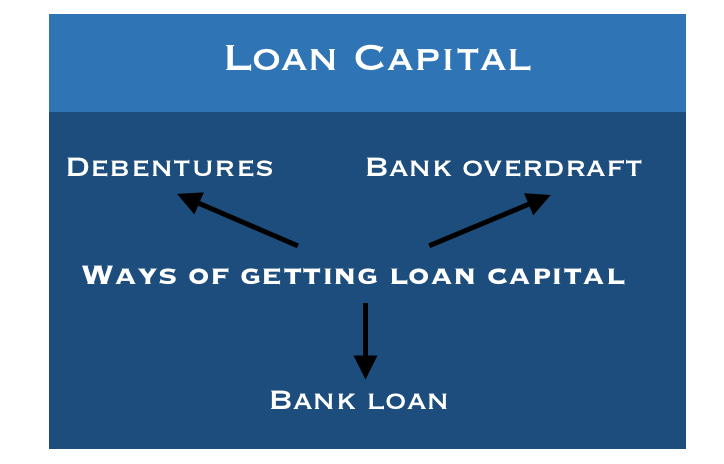 There are three main ways businesses can get loan capital.

Debentures are medium- to long-term debt instruments used by large corporations to borrow money at a fixed rate of interest.

A debenture, like a loan bond or certificate of loan, is evidence that the company is liable to pay a certain amount with interest, even though the money raised by the debentures becomes part of its capital structure (rather than share capital).

Those who buy debentures (debenture holders) have no rights to vote in a company’s general meeting of shareholders. However, debenture holders have separate votes, depending on the rights attached to the document.

The interest paid to debenture holders is a charge against profit in the firm’s financial statements.

In order to secure their loan in the event of the company’s collapse, bondholders may take a charge over some or all of its assets.

An overdraft occurs when you withdraw money from your bank account and the available balance goes into negative numbers (below zero) – the account is overdrawn.

If you already have an agreement with your bank for an overdraft, and your balance is within the authorized limit, you will normally be charged interest at the agreed rate.

If you exceed the limit, additional fees will be charged, as well as possibly higher interest rates. NatWest Bank in the UK calls this an ‘Unarranged Overdraft’, and says that if the account holder goes more than £10 over the agreed limit, he or she will be charged an Unarranged Overdraft Usage Fee of £6 per day until the position is rectified (this is capped at £90 per charging period).

The lender sets the fixed period over which the loan is provided, the rate of interest and the repayment schedule.
In most cases the bank will ask for some kind of security (collateral) for the loan. If it is a start-up company this security will probably be an asset owned by the entrepreneur.

Bank loans are generally cheaper than overdrafts, i.e. interest rates tend to be lower. However, a bank loan is less flexible than an overdraft – the business is committed to a repayment schedule over a fixed period with a bank loan.

In the finance and business world, the word ‘capital (used alone) refers to funds invested in starting a business or expanding one, plus machinery, vehicles, buildings, etc.

Sometimes, if a bank requires a loan the lender may ask for a guarantee, especially if the business relies heavily on exports. In the United States, the Import-Export Bank (Ex-Im Bank), the government’s official export credit agency, may guarantee up to 95% of the loan.