What is Purchasing Power Parity (PPP)? Why is it important?

Purchasing power parity (PPP) is an economic term that calculates the relative value of different currencies.

When calculating GDP per capita, purchasing power parity gives a more accurate picture about a country’s overall standard of living. Imagine country A has a GDP per capita of $40,000, while that of country B is just $10,000.

Does that mean country A’s people are 4 times as rich? It depends. What if a basket of goods, plus housing, utilities, transport and health costs are four times as expensive in country A compared to B? The two countries’ standards of living would be pretty similar. 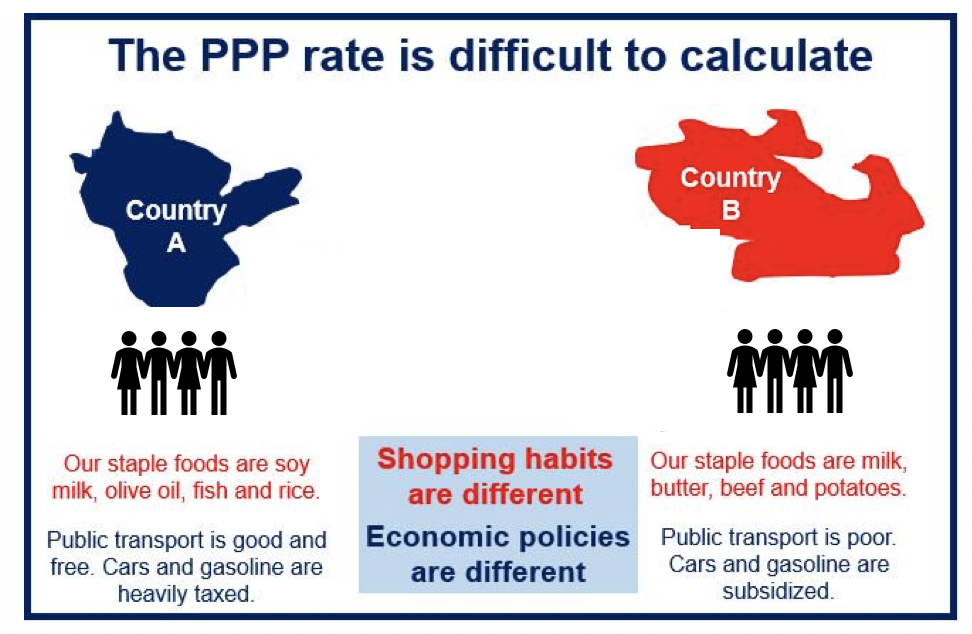 The World Bank said that the calculation of PPPs is a massive exercise.

According to ft.com/lexion, purchasing power parity is:

“A method of currency valuation based on the premise that two identical goods in different countries should eventually cost the same.”

PPP allows economists and investors to determine the exchange rate between currencies for the trade to be on par with the purchasing power of the countries’ currencies.

Essentially this means that adjustments are made to exchange rates so that a product has the same price when sold in different countries (based on the same currency).

It is a theory that says that a basket of goods in one country should cost the same in another country once you account for the exchange rate.

It is important for companies to set the same prices for products across different countries. If there are prices for the same product that are different between countries it is not sustainable. This is because it allows someone to buy the product in the cheapest market and sell it for a higher price in another market (gaining arbitrage profit).

The PPP theory follows the belief that as the price for one product should be equal in different markets, then a basket or group of products should also be the same.

PPP rates mitigate the risk of false international comparisons because of inferences using observed market exchange rates. If the GDP of one country is converted into another currency using PPP exchange rates then these misleading comparisons are less likely to occur.

The importance of PPP

The PPP exchange rate of a country has two primary functions:

The formula for relative PPP is:

The PPP exchange-rate calculation typically uses the price of a baskets of goods to compare purchasing power across countries in order to provide an accurate analysis of general price level. This is very different to the law of one price 0 which only applies to individual commodities.

GDP (PPP) uses purchasing power parity as a basis of comparing the general differences between the economic output of countries. This is useful because PPP accounts for factors such as relative costs and inflation.

Below is a map of the GDP (PPP) per capita across the world in 2013, according to the CIA World Factbook.