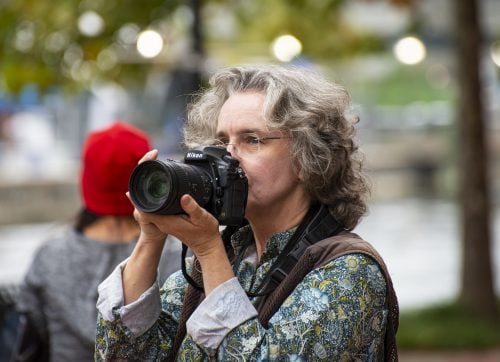 Some people choose self-employment because they want to be their own boss.
Image credit Pixabay

According to Merriam-Webster, to be self-employed is to earn “income directly from one’s own business, trade, or profession rather than as a specified salary or wages from an employer.”

At the heart of the definition is the sense of being one’s own boss. Employing oneself means being responsible for the success or failure of the business. It also means owning the risk of making a loss or a profit.

Working for oneself and earning an income as an employee are not necessarily mutually exclusive. A person can have a job working for an employer and also be self-employed in their own business.

People become self-employed for a variety of reasons. For some, it can be the desire for autonomy. For others, it might be necessary just to survive. Economic context plays a role. Countries also vary in the extent to which they encourage and support entrepreneurship.

This article outlines two definitions of self-employed. The first is from the Organization for Economic Cooperation and Development (OECD) and takes an economic view. The second definition is from the United Kingdom government who use it for tax purposes.

To define self-employment, it is necessary first to define employment. The International Labour Office (ILO) has formulated a definition that is widely used.

“Persons in employment,” note the ILO, “are defined as all those of working age who, during a short reference period, were engaged in any activity to produce goods or provide services for pay or profit.”

Many countries use the ILO definition when compiling statistics and formulating policy. This means that they count those who work 1 hour or more per week as employed.

The reason for including unpaid family members is because they do not have formal employment contracts entitling them to receive a wage. Instead, they share in the income that the family enterprise generates. The OECD point out that this group is “particularly important in farming and retail” enterprises.

However, as a result of this inclusion, together with the ILO definition of employment, the OECD’s self-employment rates can be very high in countries with many small farms and no formal employment contracts.

According to an OECD 2020 report, the countries with the highest self-employment rates are:

In contrast, those with the lowest rates of self-employment are:

The following chart shows all the countries covered by the report. The figures reflect how “[s]elf-employment may be seen either as a survival strategy for those who cannot find any other means of earning an income or as evidence of entrepreneurial spirit and a desire to be one’s own boss.” 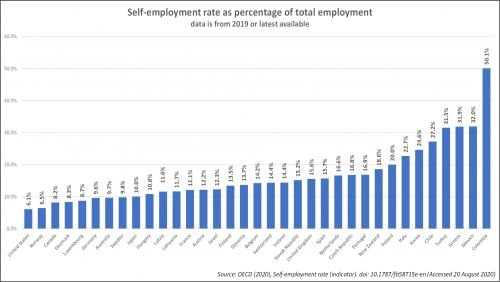 Governments take an interest in whether individuals are employed or self-employed because it can affect how they pay tax. In the UK, as in many other countries, employees pay income tax through a pay as you earn (PAYE) system.

PAYE systems deduct income tax from employees’ pay before they receive it. In contrast, self-employed people pay tax on their profits, not their earnings.