What is signaling? Definition and meaning

Signaling occurs when a person in the market who has information that others do not have – known as an insider – triggers selling or buying behavior by those who do not have information, because of the actions of that insider. The insider’s behavior is taken as a ‘market signal’ to others as to what might be happening to a share value – hence the term ‘signaling’.

The term is spelled ‘signaling’ in American English and ‘signalling’ in British English.

One of the largest problems sellers face is trying to convince buyers or potential purchasers that what they are trying to sell is as good as they claim it is. 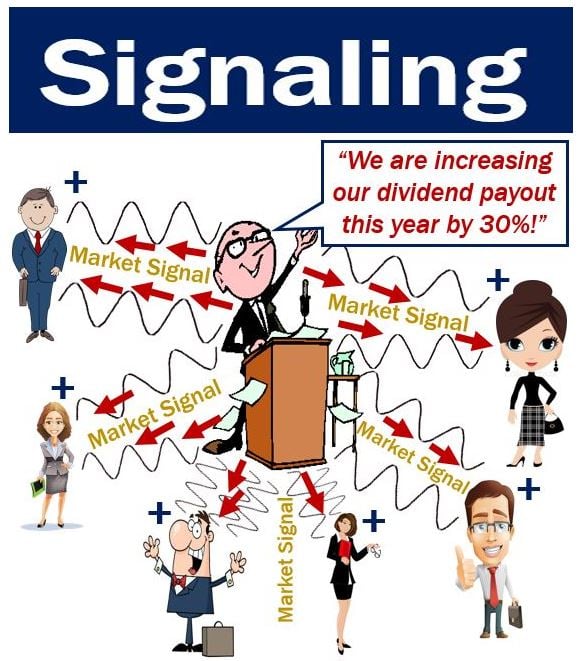 By saying that dividend payouts will increase significantly, the announcer has sent out signals that market participants will perceive as positive information (+) on the company’s future strength and outlook.

This type of problem is common when the features of whatever is being sold cannot be easily observed by the buyer.

If you cannot easily observe the features of what you are about to buy, it is natural for you to be concerned that the seller might be conning you.

When in such situations, sellers may try to do something that shows they are being honest regarding their description of the product. That ‘something’, in the world of economics, is known as ‘signaling’.

According to BusinessDictionary.com, a market signal is an:

“Indication or information passed passively or unintentionally between participants in a market. For example, a firm issuing bonds indirectly indicates that it needs capital and that there are reasons (such as desire to retain control of the firm) for which it prefers loan capital over equity capital.”

What is dividend signaling

According to dividend signaling theory, when a company announces that dividend payments are going to increase, investors and analysts pick this up as a strong market signal that the business’ prospects are good.

If John Doe Inc. announces an increased dividend payout, this information is taken positively in the market and helps build a favorable image of the firm regarding its future economic health and growth prospects.

If a company’s share value goes up after it announced a greater dividend payout, that rise is due to dividend signaling. The theory of signaling in the job market was introduced by American Economist Michael Spence in an article – ‘Job Market Signaling’ – published in The Quarterly Journal of Economics in August 1973. Prof. Spence wrote that job applicants signal about their ability level to the employer by acquiring education credentials. People with more educational credentials signal greater potential for high productivity, as far as the employer is concerned.

Other examples of signaling

If a company is willing to spend vast amounts of money advertising a particular product, people will pick up on that market signal – willingness to commit funds – in fact, that may mean more to them than the details within the adverts.

A company planning an IPO (initial public offering) that has good future perspectives and higher chances of success, i.e. a ‘good company’, should always send very clear signals to the market. For example, the owner should hold onto a significant percentage of the firm. For the market signal to be reliable, it should be too costly to be imitated by the ‘bad companies’.

If the company that is about to go public sends no signal to the market, asymmetric information will lead to adverse selection in the IPO market.

The fact that you went to a top university may matter much more to companies looking to take on young graduates than what you majored in.

“To be useful, signals must impose more costs on those who use them to send false messages than any gains to be had from lying.”