Skill means ability or aptitude. Individuals with craft skills, for example, have the ability to create garments, tools, ornaments, and other objects. Recruiters describe jobs as requiring particular skills and employment surveys talk of gaps between what employers need and what the labor force possesses. 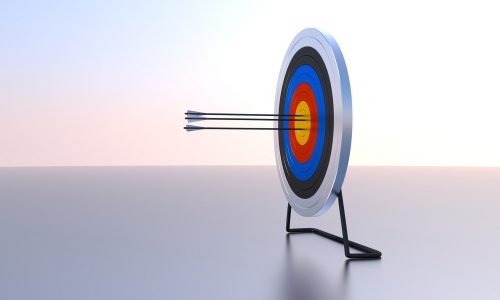 You can improve a skill with deliberate practice. Image: QuinceCreative at pixabay.

Oxford Learner’s Dictionaries give general and specific uses of the term.

The first use means generally having good ability. An example of this might be, “we need to hire someone with skill for this role.”

The specific use means to possess a particular aptitude. For example, “you need someone with plumbing skills to fix the heating system.”

The International Labour Organisation (ILO) sets international standards. Among these, is the classification of jobs for surveys, censuses, tracking employment trends, and other purposes.

In these contexts, the United Nations agency define skills as “the ability to carry out the tasks and duties of a given job.”

They use two measures: level and specialization of skill. Jobs requiring high-level skills are those whose tasks and duties tend to be complex and wide-ranging. To measure the skill level of an occupation, the ILO suggest that you consider one or more the following:

Labor market reports sometimes talk about skills shortages or gaps. But what does this mean and where does the information come from?

A skills gap is the difference between the skills that employers seek and that which workers possess. Some measures also include students and trainees who are about to enter the workforce.

A project for the European Union, suggests that, typically, surveys on skill gaps draw on the following sources:

For some time, there have been reports that the global skills gap is widening.

A survey of United States human resources leaders found that the skills gap widened by 12% from 2018-2019.

How to learn a new skill

A skill is not just job-related. It is any ability that you can learn, for example, archery, learning a new language, how to garden, knit, ride a motorcycle, and read music.

Here are some tips for learning new skills, whether for work or leisure:

Learning involves memory and creating new pathways in the brain. A study of healthy volunteers showed that rest likely plays a crucial role in helping to solidify memory during learning.

Break it down and vary the method

This tip relates to the previous one in that breaking down the process into sections with breaks aids learning. As an example, take learning a new language. You could break this down into:

Practice is more than mere repetition. To be effective, practice also has to be deliberate, which means making adjustments.

In athletics, for instance, deliberate practice requires self-reflection and feedback. In this way, each practice session incorporates learning from previous sessions.

The great professional golfer Ben Hogan is reported to have improved his golf swing by breaking down each phase and experimenting with new methods for each. He then tirelessly repeated different combinations until he found the most effective.

Here is a tool that a team leader can use to quickly see how skilled their team is. You can apply it to a manufacturing operation, a project work package, or essential skills for a particular task. 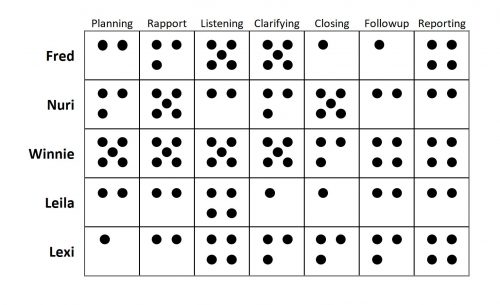 The example in the illustration is for a telesales team. The task is to contact and remind customers of product benefits and persuade them to upgrade. The team leader has compiled a grid of the abilities that the members must possess to do the task well. These are:

The skills are the columns and the rows are the team members. This forms a grid – an array of boxes. Each box contains a symbol that shows the proficiency of that member in that skill. There are six levels of proficiency, represented by dots as follows: