What is an SME? Definition and examples

SME is short for Small and Medium-sized Enterprise or Small to Medium-sized Enterprise. These firms are independent, non-subsidiary businesses that employ no more than a certain number of workers. This threshold varies by country. In the European Union, for instance, the maximum is 250 workers, while in the United States it is typically 500. 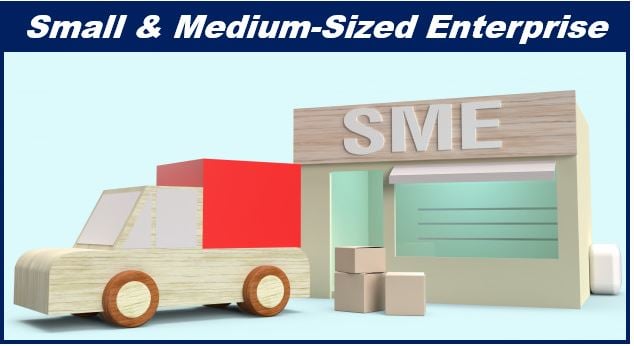 SMEs play a vital role in the global economy. The vast majority of firms worldwide are SMEs and they contribute substantially to job creation and economic growth.

According to the World Bank, over 90% of enterprises worldwide are SMEs. These firms also employ around half of all the world’s workers. An enterprise, in this context, is a commercial entity, i.e., a company or firm.

The Organisation for Economic Co-operation and Development (OECD) suggest that financial ceilings also feature in the definition of an SME. For example, the European Union (EU) defines these ceilings in terms of maximum turnover or balance sheet.

Independence also forms part of the SME definition. A subsidiary of a larger company does not qualify. Similarly, a small or medium enterprise that becomes a subsidiary through merger or acquisition ceases to be an SME.

The European Commission (EC) define SMEs as enterprises that employ fewer than 250 workers. In addition, these firms have an annual turnover of no more than EUR 50 million, or a maximum balance sheet total of EUR 43 million.

An important reason to define SMEs is to study economic activity and its drivers. It enables researchers to focus on specific sectors of the economy.

Another reason for defining SMEs is that it helps to target policies and funding.

Around two-thirds of jobs in most OECD countries are in SMEs. This proportion is higher in Japan and Italy and lower in the United States.

In emerging economies, small and medium-sized enterprises account for at least 40% of gross domestic product (GDP). The proportion is even higher when it includes what the World Bank calls “informal SMEs.”

According to the World Bank, access to finance is a significant barrier to SME growth in emerging markets. They urge all governments to prioritize SMEs as they are the key to absorbing the world’s growing workforce.

The United States uses different criteria to define SMEs. They also tend to use the term small business rather than small and medium-sized enterprise.

The United States government agency Small Business Administration (SBA) generally define small businesses as firms with no more than 500 workers. However, this ceiling can vary by industry type.

Like the EU, the SBA definition also includes financial ceilings. The limits that apply, like numbers of workers, also depend on the industry.

Firms in the United States can use an online tool to determine if they meet the SBA definition of small business. Doing so can help them find out if they qualify for certain programs – such as contracts and SBA loans – that the government reserves for small businesses.