Staff is a collective word for an enterprise’s workforce. It can refer to all workers, or a particular group. The term has a different people-related meaning in the military. As a verb, it means to supply a workforce, such as to staff a department. Other meanings include a long stick that aids walking and a type of measuring rod. 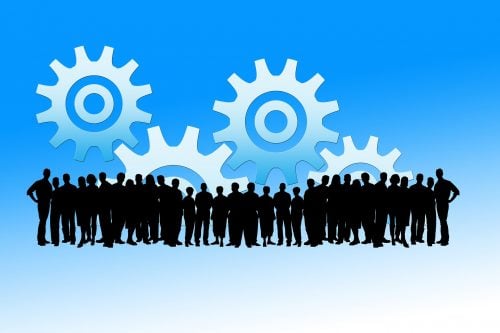 A collective word for the workers in a business or enterprise. Image: Gerd Altmann from pixabay.

Dictionaries such as Merriam-Webster give several definitions of the term. These include:

This article deals primarily with the definition that refers to people working. The following examples illustrate some common uses:

We employ 12 full-time and 23 part-time staff in our Manchester office.
The staff at the hotel were very helpful.
How many members of the teaching staff were in the meeting?
The non-medical staff, including porters and cleaners, will also receive a pay rise.

The term also operates as a verb, for example:

They staffed the support center with qualified counselors.
The charity is looking for volunteers to staff the food bank.
The inspector reported that the prison was seriously understaffed.

Origin of the term

Oxford Learner’s Dictionaries suggest that, in the sense of a rod or stick, the term is of Germanic origin and relates to the German Stab and the Dutch staf.

The workforce-related definition many have come via the military. A commander carries a staff or baton as a symbol of office, and is assisted by a group of officers. Use of the term in this sense arose in the early 1700s.

The idea of staff officers and staff sergeants, who assist the commander, then followed. First use of the term to denote a group of employees likely occurred in the 1830s.

Examples – when paired with another word

The following paragraphs give common examples of the term when it pairs with another word:

Staff development: All the practices, procedures, resources, and policies that employers use to train employees to help them work more effectively. Some might differentiate this from professional development, which focuses more on careers than jobs.

Staff room: A common room where workers, especially teachers, can relax when they are on a break or between classes.

Staff rota, roster: A plan that shows which members of a group are doing which tasks. It also shows when and where the individuals are working. These plans can be quite fiddly and time-consuming to prepare. There are many software packages that can do this for you.

Staff restaurant: This is a restaurant for the workers of a company or organization. Some employers subsidize the cost of meals so that employees pay less than they would for similar fare in a regular restaurant.