What is uneconomic growth? Definition and examples

GDP stands for gross domestic product, i.e., all the goods and services that the economy produces.

“When social or environment costs become larger than the benefits of more production and consumption growth is no longer economic.”

Dramatic increases in the price of real estate, investments, or other assets may boost economic growth in the short term.

For example, a fast-moving real estate market, i.e., houses selling rapidly, can generate lots of taxable income. It is great for sellers because prices keep rising. However, the boom is not producing real economic value.

These asset bubbles invariably damage the economy when they burst. 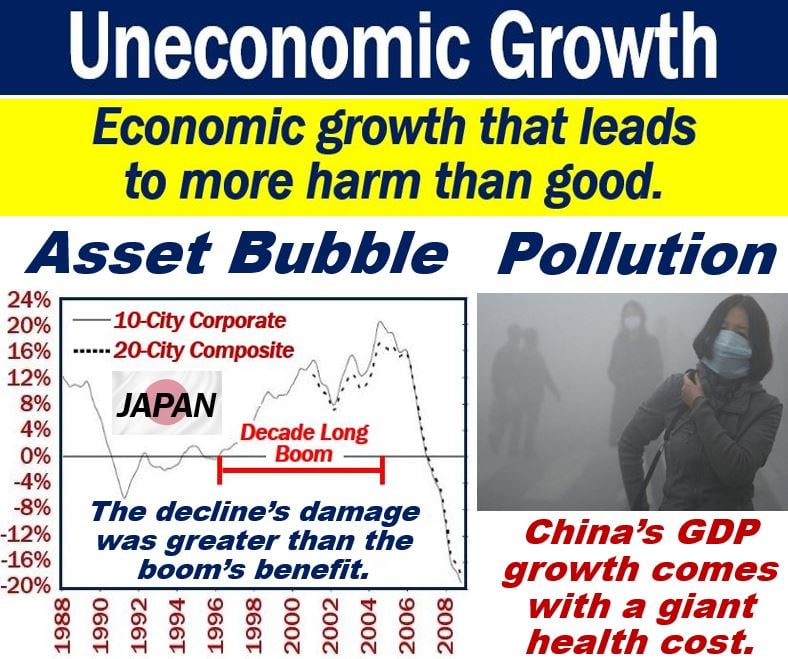 Sometimes we need to take our foot off the accelerator. Otherwise, we could be undermining our future, or perhaps the future of generations to come.

Sometimes, economic growth may reach a point in which its benefits are less than its harms to the environment. In other words, there is too much ecological damage. Ecological damage means damage to our physical surroundings, i.e., our environment.

Concerns about possible detrimental effects of GDP growth on the environment lead some people to advocate for slower growth.

Many green parties across the world argue that our economies form part of a global society. They also say that a global society and a global ecology cannot outstrip their natural growth without causing harm.

Let’s imagine that John Doe Widgets Inc. opens a giant factory near a medium-sized town. John Doe produces small plastic widgets. The new factory is great for the economy because it creates jobs and additional revenue for the government.

However, it also dumps toxins into the town’s water supply. The consequences of this damage are greater than the economic benefits.

Water pollution is a problem that has been getting worse across the world. Pollution refers to something in the environment that should not be there and may be harmful. Noise, chemicals, sewage, artificial light, and vehicle fumes, for example, are seen as pollutants if they damage our health or the environment.

Nineteenth-century British political economist, David Ricardo, worried about population growth. He said that the human population would eventually exceed nature’s capacity to provide for much more than subsistence.

Prof. Daly is an American ecologist and Georgist economist. He is an emeritus professor at the School of Public Policy at the University of Maryland, United States.

Economists and ecologists attribute the concept of uneconomic growth to Prof. Daly.