Bluetooth is the brand name of an industry standard for simple, secure wireless communication. Using Bluetooth, electronic devices can network over short distances without wires. A common example is listening to music playing on a smartphone using wireless headphones.

Bluetooth is especially useful for wirelessly connecting small devices to a smartphone, laptop, or PC. 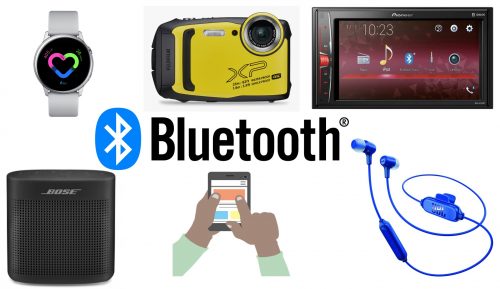 In the above image, the user has paired a wireless audio speaker, smartwatch, camera, car stereo, and wireless headphones to their smartphone.

These devices form a network with the smartphone as the master and the other devices as slaves. In Bluetooth terminology, the name for this type of network is a piconet. There can be up to seven slave devices for one master.

When you pair Bluetooth devices it means that they are aware of each other. They don’t actually work together until you activate the connection.

The user in the picture has paired their smartphone to 5 devices. But they are unlikely to use them all at the same time.

Typically, they may have their smartwatch connected all the time, the car stereo when in the car, the audio speaker when indoors, and the earphones when out walking. They will likely only connect the camera when they wish to upload images.

In this network, there is room for two more devices, such as a printer and another earpiece for making and receiving hands-free phone calls.

Bluetooth is not a physical object but a detailed set of rules, or protocols. These are framed in a weighty document called the core specification.

To use the technology, devices must be able to interpret Bluetooth profiles. The profiles specify, for instance, how to connect not only physically but also at the application level. When devices pair, they are essentially aware of each other’s profile.

A Bluetooth device has a computer chip that can send and receive radio waves in a certain frequency rage. The range centres around the 2.4 gigahertz (GHz) unlicensed Industrial, Scientific, and Medical (ISM) band.

The 2.4 GHz, ISM band is in the same range as microwaves and the radio frequencies that
Wi-Fi uses.

The advantage of using this band is that it offers the best tradeoff between range and data rate. In addition, the ISM band is a worldwide standard.

Where does the word Bluetooth come from?

Bluetooth is a nickname for the Scandinavian king Harald Gormsson who lived more than 1,000 years ago. He is famous for uniting Denmark and Norway in the year 958. His nickname comes from the fact that he had a dead tooth that was dark blue and grey in colour.

In 1996, Ericsson, Intel, and Nokia met to decide how to standardize the new communication technology and get industry players to collaborate on it.

That meeting agreed to use King Harald’s nickname as a temporary measure. However, the name caught on and so they stuck with it.

The Bluetooth SIG is a not-for-profit trade association that formed in 1998. Its role is to supervise and expand the technology. There are more than 34,000 member companies in the SIG.

According to a 2017 report, more than 3 billion Bluetooth devices were sold worldwide in 2015. That report suggested that this number could reach almost 5 billion in 2019.

The scope of Bluetooth is expanding rapidly. A growing area of application is hearing devices. For example, Bluetooth-enabled cochlear implants allow users to stream audio and answer phone calls directly to their hearing device.

The following 2018 film from the Bluetooth SIG describes the origins, growth, application, and impact of the technology.