What is a zombie bank? Definition and meaning

A zombie bank is a bank that would not continue existing without government help, either in the form of bailouts or some kind of guarantee or credit support. Its economic net worth is less than zero – if you add up all its assets and deduct its  liabilities, you end up with a negative number. In other words, a zombie bank is technically insolvent.

However, despite being technically insolvent, it still manages to repay its debts (thanks to the government).

When banks are working properly, they take in short-term deposits and turn them into long-term loans. This is good for the economy. The problem with zombie banks is that they won’t lend to anybody. 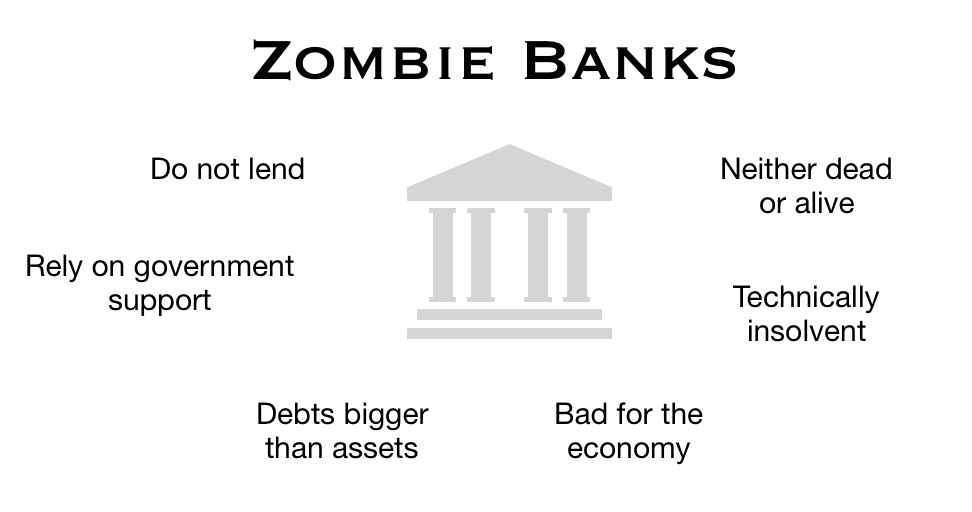 Many economists say the bailouts of banks following the 2007/8 global financial crisis was a big mistake.

Zombie banks should have gone bust, but are still semi-alive because governments drip-feed them with piecemeal bailouts or guarantees. So they stagger around, not really doing what banks are supposed to.

Zombie banks typically have huge amounts of non-performing assets on their balance sheets, which undermine expectations for any decent future earnings.

Banks became technically insolvent because many of their assets (money they lent out) became bad debts, i.e. money they will never get back. During the boom years, when properties prices and stock markets were rising, everything looked promising. But when the bust came, too many people defaulted on the banks’ assets (loans).

The term was first used by Edward J. Kane in 1987, in an article titled “Dangers of Capital Forbearance: The Case of the F.S.L.I.C. and ‘Zombie’ S.&L.’s,” where he warned of the dangers of tolerating a large number of insolvent savings and loan associations. He later expanded the term when talking about Japan’s economic stagnation in the 1990s.

A zombie bank can continue operating as long as creditors are sure that the government will continue supporting it. As soon as that state support is in doubt, the zombie institution usually dies a death.

According to the Macmillan Dictionary, a zombie bank is:

“A bank that is worth less than nothing but continues to operate because its debt is supported by the government.”

In 1990, Japan’s real estate prices and stock market indexes collapsed. Many of the country’s major banks were pushed into insolvency.

Rather than let them die, the Japanese government kept these banks going through explicit/implicit guarantees and bailouts. The resulting banks were neither dead nor alive, they could not support economic growth – they were zombie banks.

The result was a decade of very weak economic performance – what economists call Japan’s ‘lost decade’.

Too many zombie banks in an economy can kill the whole nation’s GDP growth. This is because they behave like financial vacuum cleaners. They want people’s deposits, but do not lend, i.e. they suck everything in, but put nothing back into the economy.

The term ‘zombie company‘ refers to any business that is technically insolvent, can just repay its debts, but is unable to expand. If interest rates rose, creditors decide not to be so super-lenient, or government support was withdrawn, the zombie company would probably die.