Ford has teamed up with the Georgia Institute of Technology and SunPower to develop a hybrid car which powers itself using solar energy (also known as solar power) – eliminating the need to plug into the electric grid for fuel.

According to Ford, the Ford C-MAX Solar Energi Concept “is first-of-its-kind sun-powered vehicle with the potential to deliver the best of a plug-in hybrid without depending on the electric grid for fuel.”

The car generates power from a special solar concentrator lens – sort of like a magnifying glass.

The Ford C-MAX Solar Energi Concept is described by Ford as “an off-vehicle solar concentrator that uses a special Fresnel lens to direct sunlight to the solar cells while boosting the impact of the sunlight by a factor of eight. Fresnel is a compact lens originally developed for use in lighthouses.

The way the car generates energy is “similar in concept to a magnifying glass, the patent-pending system tracks the sun as it moves from east to west, drawing enough power from the sun through the concentrator each day to equal a four-hour battery charge (8 kilowatts).” 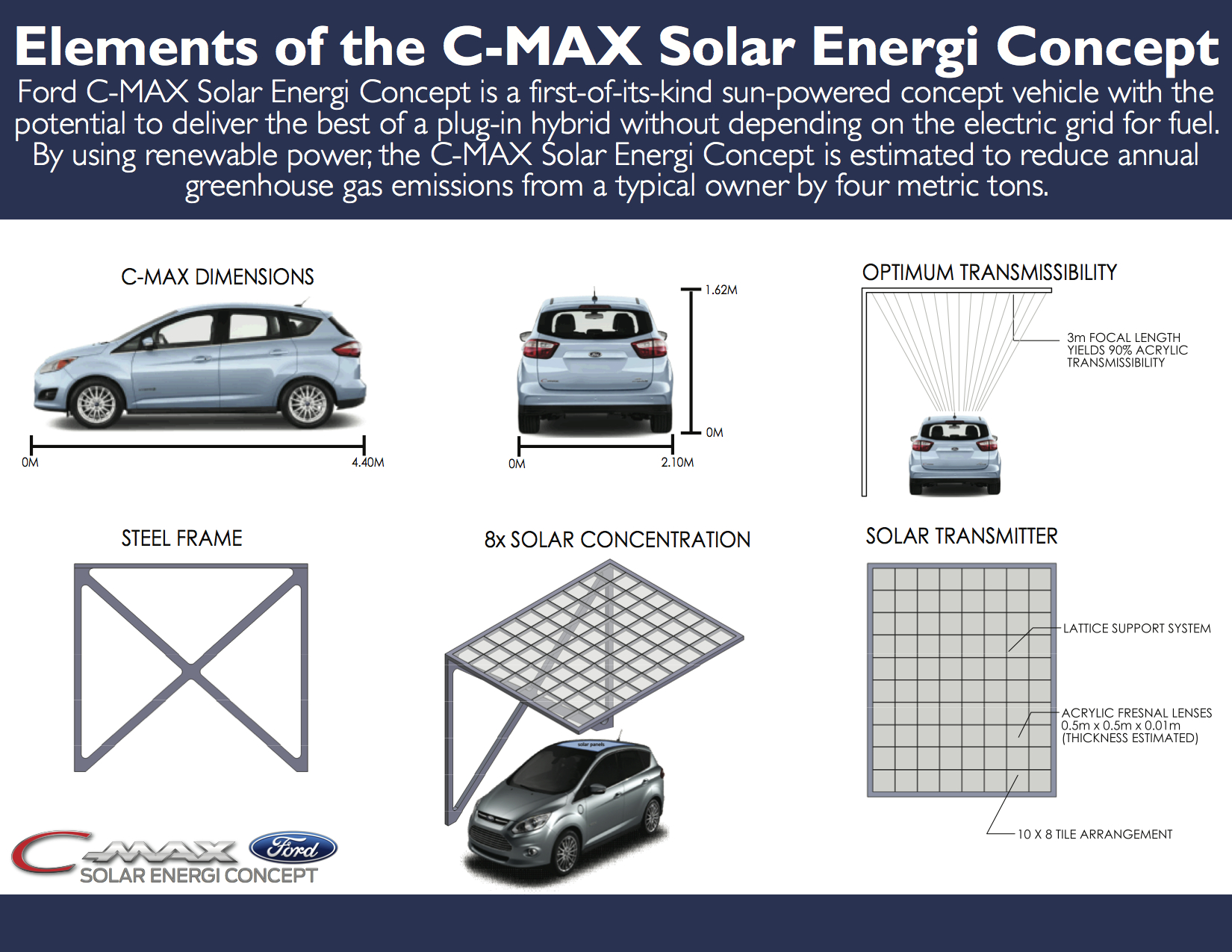 According to a Ford news release:

“With a full charge, Ford C-MAX Solar Energi Concept is estimated to have the same total range as a conventional C-MAX Energi of up to 620 miles, including up to 21 electric-only miles. Additionally, the vehicle still has a charge port, and can be charged by connecting to a charging station via cord and plug so that drivers retain the option to power up via the grid, if desired.”

The car will shortly be shown at the 2014 International CES in Las Vegas and tests will be carried out to evaluate whether the concept is “feasible as a production car.”

The company stated that the environmental impact from Ford C-MAX Solar Energi could be significant, potentially “reducing yearly CO2 and other greenhouse gas emissions from the average U.S. car owner by as much as four metric tons – the equivalent of what a U.S. house produces in four months.”

“Ford C-MAX Solar Energi Concept shines a new light on electric transportation and renewable energy. As an innovation leader, we want to further the public dialog about the art of the possible in moving the world toward a cleaner future.”