The ice sheet that covers the west Antarctic is at risk of collapsing into the ocean. The destabilization has gone too far for greenhouse gas reduction to stop the collapse, although it might restore ice sheet stability in other parts of the continents.

The collapse of the West Antarctic Ice Sheet might take centuries, but it will cause sea levels to rise by 3 metres worldwide. 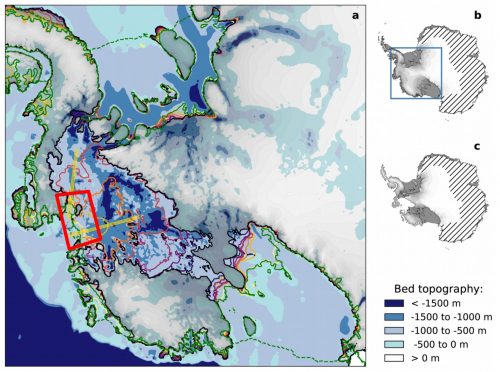 The two maps of Antarctica on the right show the West Antarctic Ice Sheet as observed (image B) and “after simulated collapse” (image C). The red rectangle in the large image on the left shows where the snowstorm would take place. Credit: Levermann et al 2019.

Such a rise in sea level would threaten highly populated coastal regions. These regions include large cities such as New York City, Calcutta, Shanghai, and Tokyo.

So, what kind and size of human effort would it take to prevent the West Antarctic Ice Sheet falling into the sea?

Using computer simulations, scientists at the Potsdam Institute for Climate Impact Research (PIK) in Germany undertook to answer the question.

They conclude that pumping trillions of tons of snow onto the West Antarctic Ice Sheet could stabilize it sufficiently to prevent it sliding into the sea.

However, the geoengineering to accomplish such a project – in one of the world’s most inhospitable environments – would be on an unprecedented scale.

Such an undertaking would also destroy a unique natural reserve, with serious consequences for sensitive ecosystems.

The researchers describe how they calculated the size of such a project in a recent Science Advances study paper.

They are not, however, proposing that the project should go ahead.

Rather, by demonstrating the “absurdity” of the feat, they hope to help people understand the scale and nature of the threat of rising sea levels.

The new research follows recent indications that glaciers in the Amundsen Sea sector of West Antarctica are moving faster than they were 40 years ago. The effect is discharging more ice into the oceans, causing sea levels to rise.

Because of their structure, some of the glaciers in the West Antarctic Ice Sheet are unstable. Now, the oceans underneath them are warming up and causing them to melt.

The ice loss due to this effect already “represents Antarctica’s largest and strongly accelerating contribution to global sea level rise,” write the authors.

The new findings confirm that even strong reductions in greenhouse gas emissions are unlikely to halt the collapse of the ice sheet.

They reveal that it would take several hundred billion tons of ocean water per year over several decades to produce the required amount of snowfall.

To make the snow, engineers would have to build equipment to raise, desalinate, and heat up the water.

“The ocean water would have to be lifted from the sea level to the top of the ice sheet by about 640 m on average,” note the authors.

This height is about the same height as the 128-storey Shanghai Tower, which at 632 m is the second tallest building in the world.

Huge snow cannons would then have to spray an area of around 52,000 square kilometres; this is about the size of Costa Rica or half of Iceland.

The project would need at least 12,000 wind turbines to power the snowmaking equipment.

“The practical realization of elevating and distributing the ocean water would mean an unprecedented effort for humankind in one of the harshest environments of the planet,” note the authors.

“The fundamental trade-off,” says study author Prof. Anders Levermann, a climate scientist at PIK and also at Columbia University in the United States, “is whether we as humanity want to sacrifice Antarctica to [save] the currently inhabited coastal regions and the cultural heritage that we have built and are building on our shores.”

“It is about global metropolises, from New York to Shanghai, which in the long term will be below sea level if nothing is done,” he adds.

‘No more than a temporary solution’

“Sea level rise will be a slow effect of climate change but very hard to reverse, increasing the frequency and severity of flooding of our densely populated coastal cities,” says Dr. Robin Smith, who was not involved in the study.

Dr. Smith is a senior research scientist in the National Centre for Atmospheric Science in the Meteorology department at the University of Reading in the United Kingdom.

Commenting on the study, he says, “So, although such a large-scale geoengineering scheme is not utterly impossible, reducing greenhouse gas emissions as quickly as possible is clearly still the most reliable way to reduce the many harmful effects of climate change.”

Dr. Robert Larter, a marine geophysicist with the British Antarctic Survey agrees that the more reliable way to reduce the long effect of climate change would be “to put effort and investment into technologies that will enable a zero carbon economy.”

“Any such ice sheet geoengineering scheme is no more than a temporary solution to buy time,” he adds.